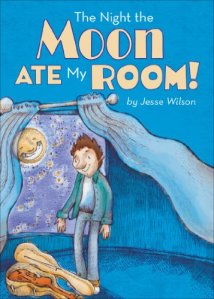 The Night the Moon Ate My Room!

From PR:  The moon was bright and full that night, bigger than I could ever even remember it.

Maybe because it was moving towards me…

After giving the worst violin recital of his life, and being laughed at by the entire school, the boy vows to never play music again. Later that night, when the moon swallows up his bedroom, it shares the secrets of being a true artist, helping the boy re-claim his self-confidence, overcome the pitfalls of perfectionism, and believe in his own dream.

Each of the five stories in The Night the Moon Ate My Room! is designed for young readers to experience the joy of self-discovery, valuable life lessons, and the adventure of turning their greatest dreams into reality.

The Night the Moon Ate My Room is composed of five different stories that, while separate, are tangled together to make one book. Each of these stories can be read individually without losing anything, but when put together as a whole they shine even brighter.  To begin, there is the Prologue which introduces the protagonist, a young violinist who played his violin for his class and kept hitting a sour note.  Of course, the kids all laughed bringing humiliation upon the distraught young man. He vowed from that day forward he would  “never, ever, play the violin, ever again.” Later that night, the moon grew close enough to his bedroom to swallow it whole, taking the young boy on a small journey as the moon tells the boy some of the things it has seen while up in the sky, in the form of stories.

The first  is The Star Pirates. These pirates steal the stars to give to the Dream Thief in exchange for gold, but have not thought out the long-term consequences  of this goal. A young boy finds a way to get on the pirate ship as it flies by.

The Birds and the Stars is about birds that go from living on a peaceful, sunny, planet, to one of darkness. One day the green bird notices the red bird and said, “Hey, you’re different from me!”  Soon, all the birds were looking at each other and noticing they were all different. They stopped singing and kept comparing. The birds escalated into comparing in degrees of differences which then turn into fear . . . and anger . . . and fighting.  They fought until a huge shadow loomed overhead, blocking the sunlight and the warmth, normally a staple on Sun Planet.

The Smudge everyone had the chance to read The Smudge yesterday.  If you missed this, and would like to read it, click HERE.  The Smudge was a lonely galaxy living deep in the sky. It had wonderful eyesight and could see other galaxies filled with planets.  Smudge spent years comparing itself to these other galaxies and became sad.  Its only wish was to be like those other galaxies.  The Smudge’s sadness was turning into despair when it heard a tiny voice from deep within the itself.  Thea, one of the planets deep within Smudge, began to speak.  It told Smudge it was greater than it thought and more important than itself, but before it could finish its statement, it began spinning out of control; Thea was headed towards another planet, Planet Earth.

Junkyard Bob is a strange man who picks up junk and then gives it away. He has been collecting and giving away junk for many years.  Bob has set up his school bus, where the collection is stored, in the desert.  A painter has pulled up and is looking over the junk.  He comes upon some blank canvases and one suddenly swirls with color.  He agrees to accept this canvas and takes it back to his abode in the desert. This canvas changes the man’s life.  A colorful cat plays a very colorful, small, but important, part of the story.

The Dream Thief and the Magic Orchestra  is the last story the moon tells the boy.  In this one a young boy interrupts the practicing of a children’s orchestra.  He wants to play the violin. The conductor asks if he can play and invites him to do so, but the violin now in the boy’s violin case is old, fractured, strung with cod webs and spiders. When he tries to play a horrific sound screams from the violin.  The Dream Thief is thrilled and has the boy join the orchestra, where a chair is waiting for him.  Each chair is filled with a child who vowed never to play again. Together they play, over and over, the cumulative sound that occurred when they took their oath. Together, this noise is the Dream Thief’s composition.  This brings the young boy’s story full-circle.

Individually, the stories are little vignettes written to set examples of good and bad behaviors, but mostly to teach kids to be themselves, accept themselves, and to love who they are and will be. As a whole, the story is about not letting the Dream Thief steal your dream away. The Dream Thief can be someone else or it can be you.  Whoever or whatever contributes to stealing your dream from you is a Dream Thief.  That is a great message to teach kids.

I like the stories, which reminded me of mini-fables.  The writing is generally good.  There are a few grammatical and a few punctuation problems, but otherwise a clean text.  I think this is a good book for middle grade kids, but needs read in a setting that facilitates discussion.  Teachers will find this book helpful and a good teaching tool.

The Night the Moon Ate My Room!

To learn more about Jesse Wilson use the following links: