#308 – On a Beam of Light by Jennifer Berne & Vladimir Radunsky 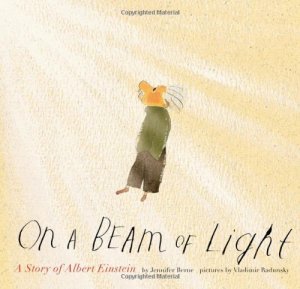 On a Beam of Light: A Story of Albert Einstein

Inside Jacket:  A boy rides a bicycle down a dusty road.  But in his mind, he imagines himself traveling at a speed beyond imagining, on a beam of light.

In that brilliant mind will one day be born some of the most revolutionary ideas ever conceived.  From a boy endlessly distracted by the wonder of the world,

Albert Einstein grew into a man who would embody genius, and would shine profound light on our understanding of our universe. Over 100 years ago, as the stars swirled in the sky, as the Earth circled the sun, as the March winds blew through a little town by a river, a baby was born.

On a Beam of Light tells the story of Albert Einstein’s life, written for children so they can understand the man, his ideas, and his genius.  Oddly, for a certified genius, Albert did not speak until age three and then only on rare occasions.  His parents worried, but little did they know that all the wondering, the looking, and the questioning would lead to a man who brightened the world with his observations.

Albert was mostly interested in the small things, beginning with the compass his father gave him; fascinated by the needle pointing to North regardless of the compass’ position.  Then he watched sugar dissolve in his hot tea and came up with the theory of atoms.  At the time, few people believed many of Einstein’s theories.  Albert left his government job in the patent office to work with other scientists and professors, the ideal job for spending time wondering and questioning.  Albert Einstein is responsible for many things that are possible today.  He continued to look, question, and wonder until the day he died.

On a Beam of Light has quirky illustrations that portray Einstein perfectly.  One instantly realizes the story is from a time long ago, or in this case 100 years.  Einstein’s iconic hair is hard to miss, as are his thoughts.  Though he does not exactly look happy while strolling sock free, licking an ice cream cone, Albert is blissful.  No other style of illustration could fit On a Beam of Light any better than Vladimir Radunsky’s gouache, pen, and ink drawings.

Writing a picture book about the world’s most iconic genius is a daunting task.  How do you explain his contributions to the physical world, outer space, and even music with few words?  Jennifer Berne has pulled off an outstanding achievement, breaking down Einstein’s life into kid-friendly bites without diluting the man’s importance or genius.

I was blown away when I first read On a Beam of Light.  It is a beautiful picture book.  By the time the reader gets to the extra information in the back on Einstein’s thought experiments, his playfulness, laughter, and pacifism, the atomic bomb, or his well-known formula E=mc2, he/she has already learned much about Einstein’s life and contributions.   What were his favorite shoes?  It’s in the book.  What is his favorite instrument?  It’s in there, too.  Even Einstein’s favorite outfit, piece-by-piece, is in the book—in case you were wondered what he liked to wear while pondering.

Kids will like On a Beam of Light.  While there is much information, the story is a light and a fun read with quirky and fun illustrations.  Actually, the entire book, from book jacket, inner covers, and everything in between those covers is a delight for the eyes.  On a Beam of Light is one of those books every school library from grade 1 to 12 should have at least one copy.  This makes the perfect gift for any science-oriented person in your life of any age.  On a Beam of Light will entertain and educate children.  They may begin their own wondering and questioning.  And if the teacher complains about all that questioning, so did Einstein’s, and what a gift he turned out to be.

Late note:  Vladimir Radunsky’s illustrations are much like those by Mark Twain in his book Advice to Little Girls.  You can see the similarity HERE.

On a Beam of Light: A Story of Albert Einstein