#318 – The Dream Dealer by Marita Phillips 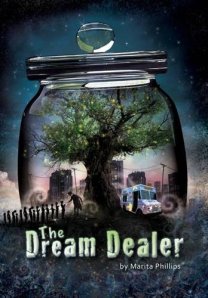 Website:  What starts as an ordinary school playground with ordinary teenage tensions, gangs and cliques, takes a sinister turn when a stranger parks his ice cream van outside the school gates. Nothing is the same again.

Twelve year-old Finn is a misfit at school and lonely at home. He is searching for his long-lost mother. In another part of town, hell-bent on his own mission, lives the charismatic Dream Dealer. Attractive but not quite human, his unusual origins remain a mystery. With his gormless side-kick Flake, he sets up his ice-cream van by the school. However, when the adults aren’t looking, it’s not ice creams he’s selling but Ice dreams!

Most of the kids fall for the Dream Dealer’s artful ways. Finn resists until it seems only the Dream Dealer can help him find his mum. As he finally accepts an ice dream he is faced with the choice of fulfilling his dream or saving the life of his enemy. His decision leads to consequences nobody could have guessed.

First Sentence:  Finn scraped mould off an old piece of cheddar and began making sandwiches for himself and his dad.

Middle grade was not the happy place Finn might have wanted.  He was the outcast, the one no one talked to except to say something mean.  Delphi was new to the school.  She was told to stay away from Finn . . . if she want to be popular and well-liked.   Delphi is not one who likes being told what to do, so she immediately befriended Finn.  They got along great, finding the other easy to talk to and hang around.  Then the Dream Dealer arrived.  Whenever adults were around, the Dream Dealer sold ice cream out of his blue truck.  When only children were near, he changed the letter “C” to “D” and sold the children not ice cream, but ice-dreams.

Ice-Dreams wrapped the child in a nice, warm, safe bubble.  Inside was a place where happiness made the child feel good, but distant.  With each lick of the ice dream, part of the child’s soul rose out and into a jar inside the Dream Dealer’s van.  The more ice dreams the child ate, the more spaced-out he became, forgetting who he was, where he came from and why he was there—and he lost more of his soul.  The child began skipping school and thought of nothing but his next ice dream.  The Dream Dealer used these soul vapors to remain human.  Without the child’s soul vapors, he would revert to being an earth-imp.  The top prize was the gold soul found only in certain sets of twins.  These could reward the Dream Dealer with immortality.  Somehow, he knew that Finn had a gold soul despite not being a twin.

Finn did not like the Dream Dealer, nor did he trust him.  Delphi felt the same way.  The rest of the kids quickly began falling under the spell of ice dreams.  Finn lived with his father.  Finn did not have a mother or siblings, just his father—an unemployed drunk who counted on the lottery for salvation.  The Dream Dealer claimed he could find Finn’s mother, if only he ate an ice dream to enhance his sixth sense.  Finn was getting desperate.  He thought about eating an ice dream.  Finn knows nothing about his mother, which is how his father wants it.

Finn goes off on a journey of his own in search of his mother. His pet mouse Hercules helps him find a picture of his parents and himself as a baby.  Still, no matter what the Dream Dealer said, Finn always walked away without licking even one ice dream.  He knew this was a dangerous thing to do, eating an ice dream.  After searching to no avail, and Delphi succumbing to the temptations of the ice dreams, Finn felt utterly alone.  He thought of buying an ice dream.  No one was around to stop him.  Will Finn fall under the spell of the Dream Dealer, making the earth imp a human with immortality?  Will the kids kick their ice dream habits or fade away like children have been during for centuries?

The Dream Dealer is a fascinating read.  The Dream Dealer is similar to the corner drug dealer, giving kids a free taste, only to hook them on ice dreams.  The kids slowly withdraw from life.  The ones who were once mean bullies now hardly noticed their targets.  They laughed at things that were not funny and made jokes that made no sense.  Like drugs, the ice dreams take away a part of each child.  The more ice dreams they consumed, the less of their true self—their soul—was visible to others.  With each taste, a portion of their soul wisped out of their bodies, landing as vapors inside a jar.  The vapors kept the Dream Dealer alive as      quickly as it sucked the life out of the kids.

The hero of the story is Finn, the loner who felt the wrath of so many mean kids . . . until those kids ate ice dreams.  Finn could be any child.  His home life was rough, Finn only had one friend he could confide in and she, Delphi, ate an ice dream.  Friendships are fragile and Finn found this out.  He had little in his life, other than Hercules and a friend named Alf, to keep him going.  Alf owned a little patch of land with a manicured lawn and luscious tomatoes.  His Shetland sheepdog was pregnant and Alf promised Finn the runt of the litter.  Finn had saved up his money to buy the puppy, but the runt did not make it.  When the kids, high on ice dreams, trampled every plant, including the ash tree Alf planted after his wife died, Alf took the trouble in stride, showing great restraint where others would have blown up.  Alf is a great role model for children.

The writing is very good.  One chapter leads into the next, making it darn-right difficult not to turn a page and keep reading.  Finn, and most of the other characters, are so well defined that they come to life right off the page, including little Hercules.

The author uses British English, spelling some words differently than as used in American English.  Still, one phrase threw me.  She uses the contracted phrase “don’t let’s” as in “Ðon’t let’s hang around here,” and “Don’t let’s fight.”  The latter could be written Do not let us fight, and it would be correct, but when written as “don’t let’s” my mind thinks “do not fight, let us fight,” causing confusion.

The Dream Dealer is a story with many important themes including bullying, drug and alcoholism, broken families, blended families, friendships, and more I am probably forgetting.  Like the importance of teacher-student relationships.  Children can learn a little about each of the above and maybe a tool or two while being entertained with a wild fantasy with mythical bearings.  Kids nine and up will enjoy this story of middle school angst and the hazards of the real world, especially when faced with someone extremely desperate to get a hold of something that is not theirs.  The Dream Dealer offers to give the kids what they want in an ice-cream cone.  There are no easy solutions, or quick fixes for most things in life.  I hope kids who read this engrossing book will understand this by story’s end.

Ms. Phillip’s  turned The Dream Dealer into a hit play.  The author’s YouTube channel carries a few scenes from the play.  Look for the links at the end of the review.

After reading nearly 200 pages, the author serves up a wonderful twist.  Unfortunately, the writing gave the twist away dozens of pages earlier.  Still, it is a great twist.  When reading The Dream Dealer readers will groan, guffaw, and giggle while being entertained.  The author offsets her story’s intensity with sweet passages, usually involving Finn.  The Dream Dealer is the best self-published book I have read in the past four years.  If you enjoy reading fantasy, family drama, and middle grade angst—and all the little problems that go with those three—The Dream Dealer is the book for you.      Enjoy!