Giveaway: Heroes of the Year by Frances Watt

Today’s giveaway is from Eerdmans Books for Young Readers and Kid Lit Reviews. The winner will receive the new release, Heroes of the Year by Frances Watt.  Enter using the Rafflecopter link at end of the review.  Entries close Saturday at midnight.  Winner announced on Sunday.  Now for the review of Heroes of the Year. 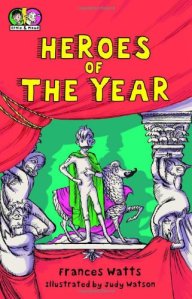 Heroes of the Year

Back Cover:  Extraordinary Ernie and Marvelous Maud, the ten-year-old superhero-in-training and his sidekick sheep have a good chance of winning the Hero of the Year award until—a pencil-wielding fiend starts to wreak havoc in the town of Baxter.  Can Ernie and Maud stop Pencil Pete and win the golden trophy?

First Sentence:  Ernie Eggers strode down Main Street on Monday afternoon, his long green cape swishing behind him and the heels of his tall black boots echoing loudly as they struck the pavement.

I must first apologize.  My computer has been acting strange all night.  This review is a couple hours late because of fighting with the thing and no superhero came to my rescue.        My word processor application is messed up as is my mouse.  Not even a superhero-in-training and his sidekick could fix this villainous problem.

Let me simply say that this is the fourth outing for Ernie and Maude.  Still heroes-in-training, they are up for Heroes of the Year, which their branch superheroes truly believe they will win.  Ernie and his sidekick Maude—a sheep who takes gymnastic lessons to learn the splits—are to concentrate on impressing the judges—who could show up at any time and be anyone.  Then a major crime surfaces in town.  Someone is putting mustaches on pictures and objects around town.  Ernie and Maude decide to capture the villain instead of concentrate on impressing some judge.  From then on mayhem ensures, not also by the villain, who proves to be extremely elusive.

I loved this book.  The story is full of humor, pathos, and pure craziness kids will love.  The superheroes all have sidekicks that are a bit odd.  Ernie has Maude, a sheep in red leotards.  Valiant Vera’s sidekick is Housecat Woman.  They won the Hero of the Year trophy when Housecat Woman was just a kitten, and no one from the Baxter Branch has won it since.  There is a lot of pressure and

expectations put on Ernie and Maude.  When Pencil Pete strikes the businesses of Baxter, Ernie decides capturing the villain is most important.  I like that he forgets about his own glory for the good of the town.

Heroes of the Year is a fun story and a fast read.  As a bedtime story, its eight chapters could be finished in a week.  Or, on a sunny afternoon—or rainy, or snowy—it can be read in full.  The humor is light but effective.  The illustrations

add depth to the story.  Kids will love the bad behaving adults.  Heroes of the Year is the type of book I would have devoured as a child.  Any child who loves solving crimes, humor, crazy characters, and misunderstood villains will enjoy Heroes of the Year.

You can own this copy of Heroes of the Year by entering the Rafflecopter contest.  Several entries can be easily earned with two daily entries that can increase your chances of winning this wonderful middle grade read.  Here is the giveaway link: a Rafflecopter giveaway

Heroes of the Year