The Summer of Peyo From Publisher:  Almost 70 years ago in Brussels, a young man named Pierre Culliford (Peyo), applied for a job as a dental assistant only to find that he had missed the interview by 15 minutes.  Culliford was forced to take a job as an illustrator instead.  Today, we can look back on that late appointment as the moment Culliford became the cartoonist known as Peyo, and his little blue woodland creatures called The Smurfs were born!

The Smurfs may be only three-apples-high, but their influence across the decades and around the globe is legendary.  And although Peyo’s fans are legion, not many are aware that it all started with books.  Papercutz, the comics publisher for kids, is extraordinarily proud to bring Peyo’s unique artistic vision to U.S. kids today, and bring some awareness of his original comics to the Smurf-mania that’s sweeping the nation in the run-up to the blockbuster movie, Smurfs 2.  (Opens July 31st.)

Our highest effort in that regard is THE SMURFS ANTHOLOGY, an archival project that will see every Smurfs comic presented in beautifully designed hardcovers in chronological order, with contextual notes and behind-the-scenes photos.  As a special treat for fans, the series will include Peyo’s Johan and Peewit stories in which The Smurfs made their very first appearances, many of which have not been published in English before.

I was never a big Smurfs fan when they were popular years ago.  Looking through the anthology, book 1, I can appreciate the illustrations and the stories that I could not as a kid.  I have come to enjoy comics because of the books reviewed for Papercutz and Lerner Publishing in particular, plus a few other graphic novel publishers.  The Smurf’s Anthology, #1 will impress. Starting with the first ever Smurf comic and continuing in sequential order, the growth of the characters can be seen along with the illustrative work that turned these little guys and gals into a world-wide phenomenon.  If you are a Smurf fan, you will love this first book of Smurf history.  If you love comics, you’ll love this anthology.  If you are not part of either of those groups, check it out at your library or browse through it at a bookstore.  My guess is you will enjoy what you see and read. 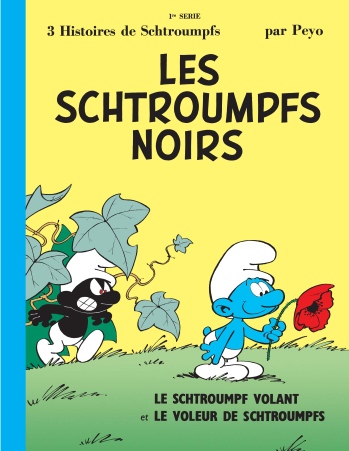 Kids will be amazed to learn that Saturday morning cartoons were not where the Smurfs were born.  They began in the pages of a book in Europe.  It would be years before the Smurfs hit Saturday mornings and subsequent fame.  With the first anthology, we have the opportunity to read and enjoy those first comics where the Smurfs found a home.  Plus, with the “behind-the-scenes” inserts, the history and making of the Smurfs is available for the first time.  This is a history book, of sorts, that creative teachers can use in the classroom.  For example, originally the Smurfs bit by a fly turned black—in reference to the black plague—not purple.  When brought to the United States, the color changed from black to purple in respect to the civil rights challenges of the time, even though that was never an undertone in Peyo’s original story.

I loved the oversized pages.  Being thicker than a normal book page little hands will be able to enjoy the stories without the worry of tearing.  Being a collector’s item it would still be wise to watch over young children as they giggle at the Smurfy antics.  Papercutz has done a nice job recreating many of these older comics, restoring the colors to their original hues.  I especially enjoyed the side notes that add to the history of this collection.  It is like being there, spying on the Smurfs and their creator.  A pleasure to read, The Smurf’s Anthology, #1 is a Smurf-lovers gem.

© 2013 by Papercutz, used with permission