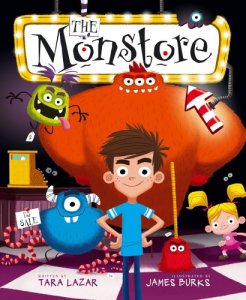 Jacket:  The Monstore sells only the most useful monsters—perfect for all your masterly needs.  And Zack has a big monsterly need indeed: to frighten his pesky little sister away.  No more sneaky sister snooping, sleepwalking, or snatching his stuff!  But Zack’s monsters don’t quite work to plan.  And the only rule of the Monstore?  NO REFUNDS.

First Sentence:  At the back of Frankensweet’s Candy Shoppe, under the last box of sour gum balls, there’s a trapdoor.

Review by Erik of ThisKidReviewsBooks – he gave 100 Gazillion stars!

Synopsis:  Zack needs a monster.  Not a pesky little monster, like his little sister, but a real monster that will scare that pesky little girl out of his room.  He goes to the back of Frankensweet’s Candy Shoppe, “knocks five times fast, hands over a bag of squirmy worms,” and then crawls into the Monstore.

Zack brings home Manfred, who is a monster that scares away little sisters.  Zack was disappointed.  Manfred did not work.  Instead of keeping his little sister from snooping, Manfred showed Gracie a great hiding place.  Zack went back to Frankensweet’s Candy Shoppe, knocked five times fast when he got to the back, handed over more candy, and crawled into the Monstore to demand a refund.

“Sorry.  No returns.  No exchanges,” said the Monstore manager.

Instead, he told Zack to get another monster because,

So Zack purchased Mookie, another monster to scare away Gracie.  Are two monsters better than one?  Will Manfred and Mookie work as a team to scare Gracie?  Will they stop her from snooping, sleepwalking, and snatching Zack’s stuff?  Or, will Manfred show Mookie the hiding place?  Will Zack finally get a refund if two monsters from the Monstore are defective?

Opinion:  The Monstore is a good picture book for any boy with a little sister who will not leave him or his stuff alone.  I like the story.  The first thing I noticed was the title:  Monstore.  How cool is that name?  Monster-store becoming Monstore seems like an easy enough title to come up with, but really, I think it is brilliant.  I would have never thought of it and if you were honest, you probably would not have either.  It is deceptively simple, yet perfect.

Okay, I know you want to know what I think of the story.  I never got that far.  The title wooed me and that was it.  Poor Zack, he probably saved up money, or whatever is currency in the Monstore, then unknowingly purchased a defective monster who likes his annoying little sister.  Then the Monstore manager points at a sign instead of helping Zack.  “No returns, exchanges, or refunds.”  Isn’t that old school thinking?  Well, whatever it is, Zack is talked into a second monster.  Mookie and Manfred are cool monster names, but not very scary names.  Manfred sounds like a butler’s son, while Mookie sounds like a distant cousin of the Cookie Monstore.  Still, regardless of unknown relations, I love the names of The Monstore monsters

The illustrations are bold, colorful, large, and fantastic for this story.  Dark purple is the dominant color and runs throughout the book.  The monsters initially look a bit scary but once they get home with Zack, their grins begin to appear.  The Monstore manager is not a monster, I don’t think, but his teeth are monster pointy and his eyes are squirrelly.  I love the frustrated looks on Zack’s face when trying to return Manfred.  Who can argue that if one monster is good, then two are great?  No one will once they gaze upon these monsters.  Love the illustrations!

I also love the book’s story.  Boys and girls will both find things to like.  The laugh meter will burst through the top, squirting all over the reader and monsters alike.  (At least the monsters won’t mind the mess.)  The Monstore is a winner.  To be honest, I knew that the first time I saw the cover months ago.  As good as the cover is, the story and the illustrations are better.  Parents won’t mind reading The Monstore more than once, or twice, or even a dozen or two times.  This fun book will induce giggle-fits, twinkling eyes, and a monster appetite for a trip to The Monstore.

Scroll down this link for Activity Book (pdf).

Aladdin is an imprint of Simon & Schuster Children’s Publishing Division