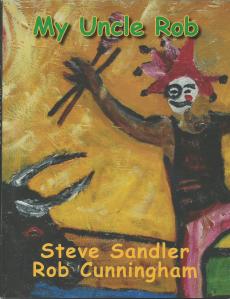 Summary:  When a young restaurant owner is stricken with Parkinson’s disease his fate changes in more ways than one—he becomes an artist.

First Sentence:  This is my Uncle Rob standing in front of his restaurant, The Uptown Café.

What the Story is About:  My Uncle Rob is a memoir.  The author takes us into a life changed by a chronic ailment called Parkinson’s disease.  Uncle Rob was a restaurateur the day his hand started shaking.  It was still shaking days later and continued when one of his feet began to shake.  A neurologist diagnosed Uncle Rob with Parkinson’s disease that progressively reduced his ability to move and will worsen with time.  Uncle Rob had to sell his beloved Uptown Café and lead as stress-free a life as possible.

What I thought:   My Uncle Rob is not a traditional children’s picture book.  A young Steve Sandler narrates this short memoir of his friend “Uncle Rob.”  Steve sent The World of Polka Dot Bear for review and My Uncle Rob tagged along.  I had not planned to review it because I was not sure how to present it.  Then I decided presentation was not my responsibility.  I am responsible only for commentary.

I loved the story of Uncle Rob’s transformation from a busy, stressed out restaurateur—albeit a successful owner—to a world-renown artist.  I especially find endearing the way Steve tells the story.  Each page shows one of Uncle Rob’s paintings and Steve uses it to tell the story in simple, short sentences.  The book starts with a picture of the restaurant and Uncle Steve standing outside waving, looking very happy.

The author does not explore Uncle Rob’s “funny ways” any further, but I see a man who loved life and would easily laugh, joke, play around, act silly, and laugh even more.  So, when he began to shake, young Steve thought it funny.  “I noticed Uncle Rob’s right hand begin to shake.  It was weird but kind of funny.  Two days later it was still shaking.  It wasn’t really funny anymore.”

Next to these sentences is a picture—a self-portrait—of a scared Uncle Rob.  After a neurological evaluation and Parkinson’s disease diagnosis, Uncle Rob sells his beloved restaurant and begins trying to live a stress-free life.  He sends his nephew to summer camp and then surprises him with the paintings he worked on will Steve was away.

Uncle Rob laughs at his nephew’s expressions, saying he looks weirder than his paintings.  Each painting has strong colors, interesting shapes, and sometimes objects that do not belong.  Animals are bizarre combinations and landscapes are nothing like the original.

Those paintings do look odd, very odd.  Look at them longer and the paintings will evoke interesting feelings within.  One man has a purple, blue, and crimson face, with a crooked smile.  He looks happy, but there seems to be underlying stress or burdens.

A landscape on the adjoining page has a bare, blue tree with limbs rising up to reach a circular sun or yellows, oranges, blue, and white.  Blue-green mountains with aqua caps fill in the background.  The grass, of the otherwise empty scene, looks like it needs a good mow.  It is an awesome painting.

Young Steve asks what Uncle Rob is trying to say with the paintings and is told it would be better for Steve to determine what they say to him.  Is there is message in My Uncle Rob; something that kids can learn?  Yes.  For one, no matter what happens life goes on so make the best of yours.  Two, what seems to be a tragedy can turn into a treat.  Uncle Rob took horrible news that changed the life he knew and changed with it, finding new interests and skills.  Age does not matter.  One cannot be too old to change, or too young to have time to wait.

My Uncle Rob is a beautifully illustrated book, all painted by the subject of this mini memoir, Mr. Rob Cunningham.  I think kids will enjoy the paintings, find their own messages in the story, but would be best to sit down with a parent or close adult when reading for the first time.  I image they will have many questions.

© 2008 by Washington Publishers, used with permission