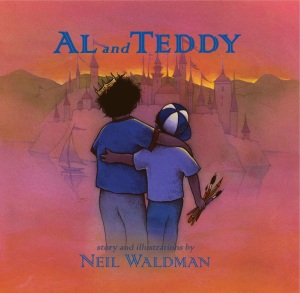 Inside Jacket:  As the sun’s first rays slip through Teddy’s window, he climbs out of bed and finds Al, sitting at his drawing table, conjuring images of an amazing rocket ship. Teddy gazes at his brother’s drawing and smiles.  “Maybe someday,” he muses, “Big Al just might take me flying with him!”

First Sentence:  When everyone’s is sleeping and Saturn circles in the midnight sky, my big brother Al tiptoes out of our house and flies to places faraway.

About the Story:  With small wheels under the cockpit and bursts of energy from jet propulsion, Al flies his blue rocket across the nighttime sky.  Al is soaring through the air to his kingdom, where the subjects call him King Alejandro.  Along the way, Al takes on the Moon Monster and, with one single shot, slays the monster.  Each morning by dawn, King Alejandro returns home to Teddy, and draws pictures of the places he had been that night.  Teddy wants to fly with his big brother Al, but cannot.  The four-years-old is one year shy of the explicit kingdom rules regarding entrance.  Teddy is not happy, but waits the year out.  One year later, Teddy excitedly reminds Al it is time to fly, but Al has bad news.  The kingdom changed some rules.  Teddy must wait one more year—until he is six-years-old—before he may fly with Al or enter his brother’s kingdom.  Teddy reacts furiously.

Al knows he has disappointed his brother terribly.  What happens next . . ..

What I Think:  Al and Teddy is a sweet story of imagination and young brotherly love.  Al shares his nightly journeys with Teddy—who narrates the story—through his art.  The hurt Teddy felt the night before vanished with his brother’s attention.  As Al draws and tells the story of his travels, Teddy holds onto his every word.  Teddy’s adoration of his big brother is obvious.  Al enjoys sharing his stories and art with Teddy, who wants nothing more than to be with his big brother.

Teddy’s reaction, and the illustrations that go with it, is similar to a four-year-old toddler’s anger, and recovery.  Mr. Waldman must have taken all the tantrums from his own childhood and transferred them to Teddy.  The four-year-old quickly throws a tantrum—his knees and elbows all but touching—he stomps out of Al’s bedroom.  Just as quickly, Teddy changes his mind, having thought of something that pleased him.  Sheepishly, Teddy asks Al to draw more pictures.  Al agrees without a word and Teddy once again is enthralled with his brother’s nightly adventures. Parents with toddlers will identify with Teddy’s mood changes and the love-hate feelings the child displays

A year later, when Teddy is once again told he must wait a year, he does more than throw a tantrum—he calls his brother a liar; a BIG FAT LIAR!  He does not say the words, but Teddy accuses Al of deliberately keeping him from flying.  Even the Moon Monster looks angry, standing behind Teddy.  Mr. Waldman captures the sting of Teddy’s words in his illustration of Al, head lowered, a single tear shed behind his glasses.  I will not say what happens next, or how the story ends, but I will say both are heartwarming.

Al and Teddy is a  well-written, imaginative story.  Al’s hand flows with creativity to the paper, as he relates his stories of adventure to an enraptured Teddy.  The illustrations are beautiful with swirls of colorful sand and delicious dark blues and oranges.  The rocket on the ground looks much different once in space. The blue body, with a darker blue ring in the back, becomes a light violet body with a light yellow band running the length of the body.  This one detail bugs me in an otherwise fantastic picture book.  There is a feeling of magic in Al’s travels and again when sharing them with Teddy.  Children of all ages will love the story of brotherly love, forgiveness, and imagination that flows from Al’s creative hand to Teddy’s big heart, and I enjoyed reading this delightful book.

Al and Teddy is first book from Dream Yard Press, a not-for-profit publisher of children’s books for the benefit of the Fred Dolan Art Academy.

DREAM SCHOOL – The Fred Dolan Art Academy CHECK THIS OUT!