What, you say?  It is still Summer?  Well, that depends on where you are.

If you are in Australia, mate, it’s Winter.

If you live in Canada, you would be riding a moose and celebrating country singer Terri Clark’s birthday.

But, if you are reading books, like to read books, like to look at books, today is the first Peachtree Book Tour, and for Kid Lit Reviews, marking the first day of the 2013 Fall Book Season!

So are you ready? Repeat after me. 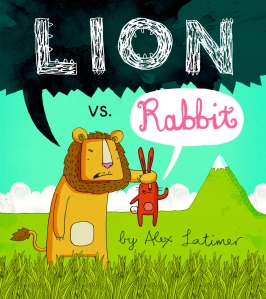 Back Cover:  Lion is mean to everyone.  When the other animals can’t take it  his bullying anymore, they post an ad asking for help. One animal after another tries and fails to defeat Lion.  Can no one stop him?  Finally a rabbit arrives.  No one thinks it will be brave enough or strong enough to defeat Lion.  But perhaps this rabbit is smart enough?

First Sentence:  Lion was mean to everyone.

About the Story:  Lion was a bully.  He gave Buffalo a wedgie.  Ouch!  Lion stuck a silly note on Zebra’s back thinking everyone would laugh.  (Sorry Zebra, but it was somewhat funny).  Lion even took Hyena’s lunch monkey!  That is just not nice.  All the animals are tired of Lion’s bullying and want to do something about it . . . but no one wanted to confront Lion and tell him.  So, the animals did what any good group of cohorts do when in a corner.  They put an ad out on the Internet asking for help.  Did it work?

Bear showed up to take on Lion in a boxing match.  Bear was strong . . . but Lion still won.  Moose was next, followed by Tiger.  They all rapidly caught the next plane out of there.  Lion was ready to go back to his normal life of bullying the other animals when a ship came in.  Yep, a big ocean liner brought Rabbit.  He was there to answer the help wanted ad.  Lion was amused.  Lion could run from zero to sixty in 4.1 seconds; Rabbit in 8 seconds!  Lion weighed 1,770 pounds.  Rabbit weighed 4 teeny-tiny pounds, including his floppy ears.  Yes, Lion was very amused.  So who wins this contest?  Does Lion stop his bullying ways?  Both are at the starting line, ready to start, and . . . you know I cannot tell you.

What I Think:  I think Lion is a mean bully and should find something better to do!  That’s what I think.  Oh, Lion vs. Rabbit is a funny book, with lots of heart and humor, kids will really like.  How do you stop a Lion?  You can box him, like Bear tried, you can try to arm wrestle him, and you can try to race him.  But good luck, because this Lion is good, except when he is bullying the other animals.  I like that the things Lion did bully the animals were light-hearted and humorous.  Kids can laugh and get the message at the same time.  After reading Lion vs. Rabbit many times, as kids surely will, the message will be clear: bullying is bad.

The illustrations, which run border-to-border, do a great job of showing us the text, which is good unto itself.  I love that Rabbit brought out the whiney, unsure side of Lion.  Bullies have two sides and many have the same bravado as Lion, but are just as meek and unsure, and sometimes full of excuses when they lose.  The illustrations are simply terrific.  None of the animals looks ferocious and their flat bodies give them a feeling of community.  I love Lion and the ways he bullies—not that I like bullies, because I do not.  The note he stuck on Zebra’s back says, “I am a horse.”  Well, of course Zebra is not a horse and kids will roar at the Lion’s joke.

Like all good children’s books, Lion faces conflict, defeats a few, confronts an escalated conflict, and changes in some way by story’s end.  I would love to tell what happened to Lion, but I cannot.  Lion vs. Rabbit is such a charming book, it would be disappointing if I ruined the first read for you.  Please, take my word, you and your child will love this book.  When I was not chuckling,  I was laughing aloud.  The twists are wonderful (sh! if you look closely, you can find hints on how Rabbit tamed Lion, sh!), and the message regarding bullying is clear:  Bullying is bad!

© 2013 by Peachtree Publishers, used with permission.