#374 – The Monster in the Mudball: An Artifact Inspector Book by S. P. Gates 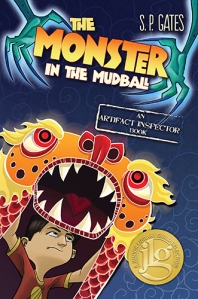 The Monster in the Mudball: An Artifact Inspector Book

Ba ck Cover:   A Monster is loose in London!  And it’s kind of Jin’s fault that Zilombo got loose.  He tracked the monster to slimy Oozeburn Creek, but how does he get Zilombo to go back into her mudball, where she can’t hurt anyone?

That’s when Jin meets Chief Inspector of Ancient Artifacts A. J. Zauyamakanda—Mizz Z, for short—who has arrived to inspect the mudball and insists that Jin Help her find the beast that hatched from it.  But Zilombo gains new, frightening powers every time she reawakens.  She’s cleverer that ever before . . . and she likes to eat babies.  When Jin’s older sister gets distracted along the Oozeburn and forgets to watch their baby brother, Smiler is easy pickings for Zilombo!

Will Jin’s baby brother be the next baby on Zilombo’s menu?  As Zilombo’s powers grow, Jin and Mizz Z team up to outsmart Zilombo!

First Sentence:  Madalitso dragged a chair over to her wardrobe.

About the Story:  Madalitso Lunge brought her mudball from England sixty-years ago in a cardboard box.  The size of a football, the mudball was a prison to a feared creature, last imprisoned twenty-years ago.  When Madalitso falls from a chair she stood on to talk to the mudball’s occupant, she slipped and fell.  The mudball fell off the wardrobe where Smiler, Madalitso’s grandson was looking at it with interest.  More importantly, Smiler was drooling atop the mudball causing it to get sticky-wet.

Soon the monster within—Zilombo—will escape the apartment on his two exposed feet.  Jin follows it to Oozeburn Creek, a dilapidated area of boarded up buildings and graffiti filled walls.  He then meets the Chief Inspector from Risk Assessment Agency for Ancient Artifacts—RAAAA, for short.  Jin has trouble pronouncing A. J. Zauyamakanda’s name so he calls her Mizz Z.  Together, they will try to get Zilombo back into her mudball, but not before the monster captures Smiler for lunch and Frankie, Jin’s sister, helps in the capture.  But it is not just Smiler in Zilombo’s eyesight.  Jin and Frankie’s grandparents actually live on the top floor of one of the boarded up buildings—right across from Zilombo’s new nest!

What I Think:  I enjoyed this imaginative monster story/family drama.  Zilombo is a creature with not only multiple talents, but also looks like multiple creatures.  Once she completely hatches into Zilombo, she becomes a creature with the forehead of an ape, muzzle of a dog—with the keen nose of a wolf and jaws with large crocodile teeth—, and swiveling, poor-sighted eyes.  She also had one more very important thing:  Smiler!  Now the stakes have skyrocketed.  Would she eat Smiler like the other babies?  Cute, adorable, and oblivious Smiler has no idea Zilombo is a monster or that he is in grave danger.  I like this dichotomy of fear on one side and complete ease on the other.  Maybe Zilombo is not a horrible creature.  Nope, not a chance.

Jin has one big problem working against him.  He has dyspraxia or clumsy child syndrome.  He has trouble with his co-ordination, often tripping or falling over nothing.  This lowers his confidence, especially when chasing a mudball down alleys and streets filled with junk.  Frankie, Jin’s older sister who likes to wield spray paint cans and loves independence, is terrified of Zilombo.  She and Jin have a normal brother-sister relationship, but now must work together and even talk to one another.  I also liked the addition of the grandparents who hold different beliefs and experiences.  They immediately believe in Zilombo, while others, like mom, laugh it off a children’s story.

There are no illustrations, which is a shame.  There are so many characters that an artist would have a ball—mudball—illustrating them.  The vividly written story makes it easy to visualize each character, still the illustrations would have been captivating.  Each character has a distinctive voice, including Zilombo.

The Monster in the Mudball will interest both boys and girls with its story of family relationships and monster “hunting.”  At 216 pages of actual story, it is a fairly fast read.  There is enough action and excitement to keep a reluctant reader turning pages.  This is also a great multicultural book with Mandarin and African cultures infused into the story.  Zilombo transverses both these cultures tying them together, if only for a short while as Jin, Frankie, and Mizz Z try to wrangle in Zilombo.  The distinctive characters, voices, and occasional humor make this a fun and exciting read that will garner at least one award, if not many.

The Monster in the Mudball: An Artifact Inspector Book

also available as an ebook

Originally published by Random House in the UK