The 2013 Little League World Series ended August 25th with Japan winning its fourth straight title this year beating California 6 to 4 in a tight game.  The USA lost again in the consolation game, this time to Mexico 15-14 in 5 ½ innings.  If you have never seen this August two-week series on ESPN, you have been missing the most exciting baseball played each year.  Sure the World Series is great, but the baseball played in South Williamsport, Pennsylvania since 1947.

In honor of those games and many more like it all summer long, I have two great baseball picture books to show you.  The first is for older kids who love the history of baseball, and you does not love this rich history?  The second is for younger kids and helps say goodbye to baseball for 2013.  Sure, the World Series is not until the end of October, but with college football starting, well, I am ready for the change in sports.  I hope you enjoy these two books. 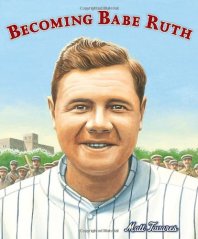 Inside Jacket:  Before becoming the Babe, George Herman Ruth is just a boy who lives in Baltimore and gets into a lot of trouble.  But when he turns seven, his father brings him to the gates of Saint Mary’s Industrial School for Boys, and his life is changed forever.  At Saint Mary’s, George is expected to follow a lot of rules—and he gets to play baseball almost every day.  Under the watchful eye of Brother Matthias, George evolves as a player and as a man.  When he sets off into the wild world of big-league baseball, his family back at Saint Mary’s is never far from his heart.  Matt Tavare’s striking homage offers a rare view into Babe Ruth’s formative years in “the house that built Ruth” and conveys an important message about honoring the place from which you came.

Opening:  Baltimore, 1902.  George Ruth lives with his parents a his baby sister in a tiny apartment above a saloon.  Most day, he skips school and roams the streets

What I Thought:  There is no doubt in most people’s mind that Babe Ruth—homerun records aside—is the King of Baseball.  There have always been big stories about Babe, most notably the game he pointed to the outfield, signaling <–to continue reading, click here–>

Back Cover:  From arrival st the stadium to the last goodnight, Goodnight Baseball is a sweet, nostalgic tale—told in gentle, fun rhyme—taking readers through the thrill of a baseball game.  With rich illustrations and careful rhythm, this is the perfect bedtime book for every sports fan.

Opening:  The great big stadium is outside of town. Fans and friends come from miles around.

About the Story:  An unnamed father and son spend the day at the local baseball teams’ stadium.  They get their seats and refreshments, settling in for a great day.  The game begins.  Pitchers throw the ball to waiting batters, who smack it into the field.  Fielders snag the hit ball, throwing it at the runner’s base in an attempt to make an out.  After three outs, the sides change and now the home team is up to bat.  At game’s end, the father and son say goodnight to various people and things, then return home where the son is tucked in for a goodnight’s sleep.

What I Thought:   Told in simple, short sentences Goodnight Baseball tells the story of a day at the local baseball stadium, watching the pros play baseball.  The day goes by, step-by-step from entering the stadium to leaving at game’s end.  Any kid could put themselves and their father into this story, which is a fun option for imaginative <–to continue reading, click here–>