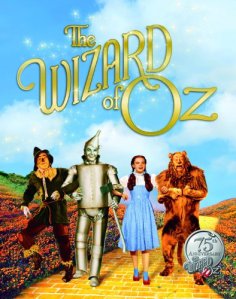 The Wizard of Oz

Back Cover:  Film stills and original dialogue from the beloved movie The Wizard of Oz tell the tale of a young girl named Dorothy, who flew over the rainbow with her dog, Toto, befriends a Tin Man, a Scarecrow, and a Lion on a Yellow Brick Road to the Emerald City, and defeats a Wicked Witch before meeting the Wizard of Oz and learning that there’s no place like home.

Opening:  Dorothy Gale lived on a farm in Kansas, but she dreamed of a place that was over the rainbow . . . and after the twister lifted her house off the ground—spinning and whirling it until finally, it crashed back down—she wasn’t in Kansas anymore . . .

About the Story:  This is a shortened version of L. Frank Baum’s famous story, now adapted by picture book author Beth Bracken.  Dorothy and her dog Toto are in their house when a twister pulls it up from the foundation and drops into Munchkin Land, atop the Wicked Witch of the East.  Dorothy just wants to go home.  Good Witch Glinda zaps the dead witch’s red ruby slippers onto Dorothy’s feet before the dead one’s wicked sister—the one known as the Wicked Witch of the West—can take them, for whatever reason.

The happy munchkins, free of the dead witch’s cruel ways, tell Dorothy to visit the Wizard of Oz.  Oh, just follow the Yellow Brick Road, they say.  She does, meets Scarecrow—needing a brain—a Tin Man—needing a heart—and a Lion—needing courage.  They all go to the Wizard of Oz, who demands a sort of payment from the four.  He wants the Wicked Witch of the West’s broom.  Oh, my!  The four somehow extract the broom from the wicked witch’s cold hands, return to the Emerald City, and Scarecrow gets a brain, Tin Man a heart, Lion courage, and Dorothy and Toto return home, but I cannot tell you how the Wizard of Oz grants their wishes (no spoilers).

What I Thought:   I have always loved The Wizard of Oz, having watched the movie each year for decades.  Oddly, I have never read the original book.  That nearly feels like treason.  Young children may have seen the movie but a book, or even that the story was first a book, may surprise them all.  Beth Bracken, who has written many picture books, adapted the story from its screenplay—, which adapted from the book—and shortened it for young readers.  The action is fast.  There is no time for any twists or turns.  This is the Wizard of Oz on steroids.  Kids who have not seen the movie will not know this.  In their case, the story is a fast-paced, somewhat scary bedtime story that cuts to the chase.

This year is the 75th anniversary of The Wizard of Oz, which is the impetus for this new edition.  I love the cover and most of the inside illustrations.  The illustrations are stop action from the original colorized film.  The blurred pages showing Emerald City and Dorothy and Toto leaving Munchkin Land by way of the Yellow Brick Road are both blurred too much for my liking.  That is not the author’s fault as the film is quite old.

The rest of the illustrations are marvelous, maybe too much so.  Many of the actors wear costumes that cover up their natural skin or hair.  The costumes are not like those one might have seen in Avatar.  The Scarecrow’s facial skin is two-toned and looks separated in some sections.  The same holds true for the Lion.  Again, kids may not notice this, but parents or anyone else that saw the film, may.  On a movie or television screen, the poor costume make-up—compared to today’s quality, which may also look subpar in 75 years—is not noticeable.

The Wizard of Oz is a lovely tribute to L. Frank Baum’s classic story for a new generation of youngsters.  The glossy color pages are of high quality, relatively thick, and printed in the U.S.  After reading this picture book, young children will want to watch the movie version Dorothy, the Scarecrow, the Tin Man, the Lion, and little Toto defeat the Wicked Witch of the West and earn the most treasured items of their heart (well, except for the Tin Man, who didn’t have a heart . . . yet).  Maybe, unlike for me, youngsters should read L. Frank Baum’s story before watching the movie.  Excuse me please; I need to read a book I neglected to read some years ago.

The Wizard of Oz

Capstone Young Readers is an imprint of Capstone Publishing