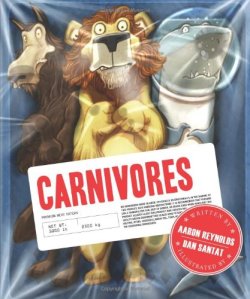 The lion is the king of the jungle!

The great white shark is sovereign of the seas!

The timber wolf is emperor of the forests!

But . . . it’s lonely at the top of the food chain.  It’s difficult to fit in when plant eaters can be so cruel—just because you ate a relative of theirs that one time!  What’s a carnivore to do?

Opening:  . . . But even SAVAGE CARNIVORES get their feelings hurt.  The lion tries to ignore it when the gazelles whisper behind his back. . . .  The wildebeests call him “bad kitty.”  It hurts.  It really does.

The great white shark . . . Everyone talks about his “feeding frenzies.”  But he’s simply a fast eater.  Nobody understands.

About the Story:  The three greatest carnivores at the top of their food chains are feeling lonely and excluded.  Not knowing what else to do, they come together to talk about their feelings.  An AA meeting, if you will, or maybe a CA meeting.  The timber wolf comes up with an idea that will get those below them on the food chain to include them and maybe even become friends.

Salad, seaweed, and berries were not enough for the three top-carnivores. The great white shark came up with another idea, but it too soon failed.  The lion, timber wolf, and great white did not know what to do.

Everyone’s mean to us.

They bring in the wisest animal they know.  The wise one said his feelings also would get hurt and then told the three despaired animals what he did to solve his problem.  The wise one gave the lion, shark, and timber wolf the boost in spirits they needed.  Life changed for all three top carnivores.  They welcomed new members into the group.  The Alligator, leopard, and others came to the meeting.  They learned new recipes and spiced up their meals.  Everyone was finally happy.  Well, almost everyone.

What I Thought:   I became excited when I saw the cover of Carnivores.  I had not heard of this yet to be released picture book.  Page after page I laughed until my stomach hurt.  Seriously, this is one of the funniest picture books I have ever read.  The top of the food chain is upset because those at the lower levels do not want to be around them or be friends.  Would you?  Oh, no way, but they are alive and have feelings, so I suppose they need acceptance.

If my reaction is any indication, and I am not saying it is, but if it is, kids are going to absolutely love this book.  Each page is filled edge-to-edge with crisp, snappy illustrations.  There is not a page with white on it, unless put there by the illustrator.  Mr. Santat has created a wonderful pictorial story that matches Mr. Reynolds story.  Whoever put these two artists together knew what they were doing.  The pages in this slightly large picture book (40 pages instead of usual 32), are glossy so as to make the images pop and thick to withstand all the turning that will occur.

The humor is out of this world, especially the twist at the end.  I still smile and giggle when I think of the ending and the plot twist I had not seen coming.  The beginning, when each animal moans about his or her horrible state of rejection, I laughed.  When they came together in a meeting—think Carnivores Anonymous—I about fell over.  What an idea.  The goofiness never stops.  The owl comes to give advice and they respectfully listen, take his advice to heart and . . . then . . . they . . . oh, I cannot tell you!

If you are looking for a picture book to teach your child the food pyramid, Carnivores is not your book.  If you are looking for a book to learn about the food chain, nah, not really going to help.  Looking for a story that is fun, hilarious, and has wonderful illustrations, Carnivores is a good choice.  If you want to have a hilariously riotous time with your child, Carnivores is the choice! It is a “can’t lose” picture book for those wanting a good time with their child, though I do not recommend this as a bedtime story.  Your child, and you, will find it hard to stop laughing and fall asleep.  However, Carnivores does have a message:  be yourself and love who you are.  I love Carnivores.

© 2013 by Chronicle Books used with permission

DONATED TO A LOCAL PUBLIC LIBRARY OR SCHOOL