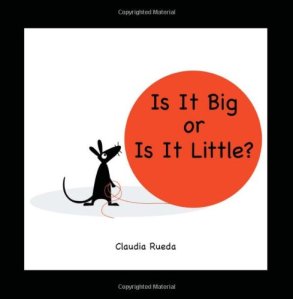 Is It Big or Is It Little?

Back Cover:  To a mouse, nearly everything looks big—but to the cat that chases him, things look a bit different.

Opening:  Is it BIG? Or is it little? Is it DEEP? Or is it shallow?

About the Story:  To a mouse, everything looks very big until a cat begins a chase. A ball of string looks big to the mouse when he begins to pull it, until a cat appears next to the string and then the ball looks small. As the mouse runs from the cat, pulling the string with him, things look favorable for the mouse until the cat gets near and then they look different. A leaf used as a parachute makes the growing bundle of string light as the mouse floats down from what looks like a chair or coach, but heavy when he makes it to the ground and carries it. The string seems long when there is distance between the mouse and cat, until the cat gets near and then it feels short.

The chase starts to look up for the mouse. With the cat face-to-face with the mouse, the situation is scary for the mouse. Then a bulldog shows up and now the cat is scared.  Finally, the cat is ready to pounce on the mouse and it looks like the end . . . until the bulldog binds the cat up with the string the mouse has collected, and now it looks like the beginning. The mouse, apparently not learning his lesson, starts pulling the string once more.

What I Thought:  This is a book of opposites designed to teach little kids the difference between big and little, shallow and deep, light and heavy, short and long, scary and scared, end and beginning. I think some of the concepts are going to be difficult for some of the youngest children to understand at first, but as the story is reread, I think they will get it. I do not think they will understand the underlying story of a mouse pulling apart a cat’s ball of string. I did not get it the first read through.

The illustrations are in black and orange until the grey bulldog enters the story. If the idea of minimalistic shades of color is to keep the child focused more on the opposites than the oohs and ahs of a colored cat, mouse, and background, it works. There is not much for a child to look at with a black cat and a black mouse, until that grey bulldog appears and adds one more shade. I do like the way the book looks. I think the black and orange works, though it makes me think of Halloween. I did pay more attention to the words and less on the story of the mouse stealing the cat’s ball of string. The colors became boring and repetitive, though as an adult, I liked how the book looks. A child may feel the same.

Overall, I think the story is cute. From the mouse’s perspective, things are big, but bring in a cat and then the object is not as big as it seemed. I like that in the end the cat—the bully—becomes the victim. But why, oh why, does the mouse start pulling that string again? Now he is pulling the string off the wrapped up cat. At some point that cat will get loose and off he will go for the mouse. I hope that bulldog is there to help once more when that cat gets untied. With the mouse starting his quest all over again, it is time to close the book and open it once more and start the tale of opposites all over again. I think kids will like the story.

Is It Big or Is It Little?

© 2013 by Eerdmans Books for Young Readers, used with permission

Eerdmans Books for Young Readers is an imprint of Wm. B. Eerdmans Publishing Company.