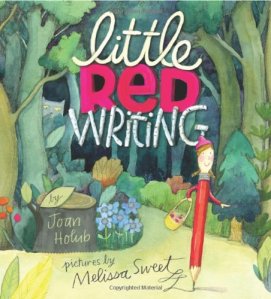 Inside Jacket:  Once upon a time in a pencil school, a teacher named Ms. 2 told her class, “Today we’re going to write a story.”

So begins a hilarious and exuberant retelling of Little Red Riding Hood, in which a brave little pencil finds her way through the many perils of story-telling, faces a ravenous pencil sharpener )the Wolf 3000) . . . and saves the day.

Opening:  Once upon a time in a pencil school, a teacher named Ms. 2 told her class, “Today we’re going to write a story!”

“I want to write a happy story!” said the birthday pencil.

“I’m going to do a nonfiction story about the great state of Pennsylvania,” said the state pencil.

“I want to write a story about bravery because red is the color of courage. But what would a brave pencil do?” said Little Red.

About the Story:  After being assigned to write a story, Little Red decided she would write about a brave red pencil. The brave red pencil started on its journey walking, but Little Red thought that was too boring. She needed action words, so off she went to the gym. With her actions words in place—and jumping ahead in the story to not give it all away—Little Red knew it was time for something to happen in her story. It was then that Little Red saw a strange tail whip around the corner.

A brave red pencil would investigate, she decided, so off she and her character went, trailing the tail as it snaked into the principal’s office. There, sitting on the desk was a wolf—a Wolf 3000 pencil sharpener. The Wolf 3000 began to chase Little Red when he janitor came in. He fainted upon seeing the principal shredded on the floor. With the janitor fainted away on the floor, Little Red knew she would have to stop the Wolf 3000 by herself. Could she defeat the Wolf 3000 with its sharp shredder teeth?

What I Thought:  I think Little Red Writing is a clever story. Not only is this a retelling of Little Red Riding Hood, it is also a lesson in how to write a story. I love retellings and this is one of several involving Little Red Riding Hood, but it is also one of the best. Having Red Riding Hood as a pencil is an odd choice and I wondered how it would work. It works splendidly. Little Red wants to write about a brave red pencil but she ends up being the story of the day. She must defeat the wolf, which has devoured Granny. I love the humor, such as when Little Red decided early on that her brave red pencil needed a less boring way to start its journey and stops by the gym to pick up some action words.

The illustrations, done in watercolors, pencil, and collage are often busy pages with multitudes of color, textures, and words of all types. Incidentally, Ms. Sweet won the Caldecott Honor for illustrations in River of Words. I particularly love the page on which Little Red hears the wolf growl for the first time. Her response is to run. Rather than showing Little Red running from the sound, only words are used. Without any punctuation or capitalization, the words feel rushed, as they should to depict a chase scene.

Written for age 5 to 8, I think even up to age 12 would benefit from reading Little Red Writing. Adults will enjoy the inventive retelling, as will kids. The humor is in the right places and there is information about writing and types of words, with their usage, making this picture book handy in a writing class as well as for reading. I love the clever word placards on Little Red’s path: Verb Action Fitness Program; Watch Out for Adjectives on Path; Conjunction Glue; and the basket of nouns Ms. 2 gives Little Red. This is just the right picture book for kids learning to write as well as those that love reading great picture books with terrific illustrations. Little Red Writing is one of the best this year.

© 2013 by Chronicle Books, used with permission