#431 – Magic Words: From the Ancient Oral Tradition of the Inuit by Mike Blanc 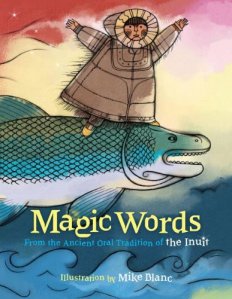 Magic Words: From the Ancient Oral Tradition of the Inuit

Press Release:  Magic Words is a modern translation (1965), of a very old Inuit creation story by nationally known poet Edward Field. As a poem it captures beautifully the intimate relationship this Arctic people have with their natural world. Magic Words describes a world where humans and animals share bodies and languages, where the world of the imagination mixes easily with the physical. It began as a story that told how the Inuit people came to be and became a legend passed from generation to generation. In translation it grew from myth to poem.

The text comes from expedition notes recorded by Danish explorer Knud Rasmussen in 1921. Edward Field got a copy from the Harvard Library and translated it into English. Magic Words can be used as a jumping off point for history and geography lessons, showing how the Inuit spread across the Arctic from Canada to Greenland.

About the Story:  The translation by Edward Field states that both animals and humans roamed the world and were one. Humans could become animals and animals could become humans; some were both. And the two spoke the same language so they understood one another. The human mind is said to have held a mysterious power, according to the Inuit. Any word spoken by chance could have strange consequences. The word came true, forming into whatever it was the person wanted to happen.

Nobody could explain this: That’s the way it was.

What I Thought: Magic Words is an interesting book. The illustrations are bold and reach every edge of the page. The Inuit symbols remind me of hieroglyphics, yet they are easier to understand, on the surface. A rabbit looks like a rabbit. A fish and turtle respectively look like fish and turtles. The underlying message the Inuit are expressing is another matter entirely. Then it gets philosophical, or magical, depending upon your viewpoint and understanding of the Inuit.

The Inuit people have a harmonious relationship with animals, plants, and the environment respecting all equally making it no surprise their stories include being one with—or transposing oneself with—animals. They believe animals can hear and understand human words. All spoke the same language. That was the time when words were like magic.

The Inuit belief that the human mind has mysterious powers is a belief many professions hold today, believing the mind is more than the equivalent of a central processing unit keeping the body functioning. They believed a word spoken could have strange consequences. Speaking of the word,

It would suddenly come alive and

what people wanted to happen could happen.

All you had to do was say it.

I like Magic Words but find it difficult to explain. Vanita Books suggests Magic Words “can be used as a jumping off point for history and geography lessons, showing how the Inuit spread across the Arctic from Canada to Greenland.” I agree with this but take a little further in that I think Magic Words can be difficult to explain to your child unless you have an understanding of legends, myths, and the Inuit in particular.

Magic Words is a beautiful books thanks to Vanita Books insistence upon high quality and because the illustrations are gorgeous. Those that collect picture books for their outstanding illustrations would be wise to add Magic Words to their collections.  Elementary school libraries should be carrying this unique picture book about an interesting and little known people.

Magic Words: From the Ancient Oral Tradition of the Inuit

© 2013 by Vanita Books, used with permission

12 thoughts on “#431 – Magic Words: From the Ancient Oral Tradition of the Inuit by Mike Blanc”