#460 – Assassination and its Aftermath: How a Photograph Reassured a Shocked Nation by Don Nardo 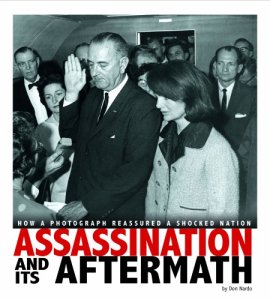 Assassination and Its Aftermath: How a Photograph Reassured a Shocked Nation (Captured History)

Back Cover:  The world was shocked and frightened when President John F. Kennedy was gunned down by an assassin in 1963. What would happen to the government of the most powerful nation on Earth? When Kennedy’s Vice President, Lyndon Baines Johnson, took the presidential oath of office on Air Force One just hours after the assassination, the White House photographer was there. Cecil Stoughton’s iconic photo showed the world that the smooth and orderly transfer of power called for in the U.S. Constitution had occurred. His photo helped ease the shock, tension, and fear in an anxious country.

It has been 50 years since Lee Harvey Oswald assassinated President John F. Kennedy while Kennedy rode in a motorcade to greet the people of Texas. Cecil Stoughton, the official—the first—White House photographer, rode in a car several autos back. When he heard the three gunshots, he ordered the car to speed ahead. When he got to where the president’s car should have been, there were no cars. A bystander told him the president was at Parkland hospital. Stoughton never made it into the hospital.

Vice President Lyndon Johnson diverted Mr. Stoughton to Air Force One. He was charged with producing a photographic chronicle the new president’s oath of office. The selected photo, immediately sent to both the AP and UPI, assured the world that the U.S. government was still running smoothly, though in new presidential hands.

Assassination and its Aftermath tells the story of four the men central to JFK’s assassination: JFK, Lyndon Baines Johnson, Cecil Stoughton, and Lee Harvey Oswald. I have heard about JFK’s assassination and Johnson becoming president repeatedly, yet there is information in this book that was new. One that genuinely surprised me was reading that Johnson had his staff figure out how many presidents had died in office.

Turned out 5 in 18 presidents dies while in office in the previous 100 years. Johnson thought almost one in four were good odds that he might become president, so he accepted the Vice Presidential nomination, running with Kennedy, a man he did not like and did not trust. I found that so odd that Johnson would even think of such a thing, let alone decide whether to accept the nomination based on those numbers. What might surprise you?

Assassination and its Aftermath is about more than the assassination and the events surrounding it. The book traces all four men’s lives until the point where they intersect. Interspersed photographs enhance the topic at hand, many of them capable of pulling our emotions. Kids may not have the same emotions as someone my age, if any at all. To kids this is simply history, whereas to their parents, who were most likely alive when all of this happened, these events are a part of their life. Assassination and its Aftermath keeps the assassination, and its effect on the nation, in the mind of kids.

More so, Assassination and its Aftermath emphasizes how one image can represent an event so completely that anyone who sees it immediately understands its significance. Such photos also reminds people where they were, what they did, and with whom they were with. That is what an iconic photograph does to the person viewing it. Iconic photos exist for many prominent points in history, and this series highlights one very important photograph.

The iconic photograph In Assassination and its Aftermath is Cecil Stoughton’s photograph of Lyndon Baines Johnson’s presidential oath taken aboard Air Force One, which also carried President Kennedy’s body back to Washington, D.C. This photograph, published all over the world, was not only proof that the U.S. government was still running smoothly, but that the transfer of power was peaceful. More important to the people of America, the iconic photograph reassured us that everything in the country would run as usual, that there would be no further disturbances while we grieved the loss of a young, very popular president who left behind two young children.

At one time, I made a living photographing events and people, so reading about the photographer who shot the iconic photo that day in Texas intrigued me. Though shooting an iconic photograph, I was still extremely interested in this book. I was not disappointed. The photographs are fantastic black and whites all from the Kennedy era. These include the one photograph that did disturb and interrupted our grief . . . that of Jack Ruby’s assassination Lee Harvey Oswald, President Kennedy’s assassinator. Now the nation would never know why Oswald killed Kennedy. Another photograph shows the search for the exact spot Johnson was standing when he took the presidential oath on the tarmac. Finally, in 2011, 47 years later, the spot was determined.

Photographs can be very important, marking both good and bad times. Assassination and its Aftermath marks one incredibly horrible time and then one confusing moment. The four men who ultimately had roles in Kennedy’s assassination and its aftermath make up the majority of this book. From their births until that fateful day, major milestones are marked on a timeline, showing how these men intersected. I think this is an interesting, thoughtful account of these men and that day. Kids should know more than history books have room to retell. Assassination and its Aftermath can help fill in the gaps and extend that already known.

Assassination and Its Aftermath: How a Photograph Reassured a Shocked Nation (Captured History)

ASSASSINATION AN ITS AFTERMATH: HOW A PHOTOGRAPH REASSURED A SHOCKED NATION. Text copyright © 2013 by Do Nardo. Reproduced by permission of the publisher, Capstone Young Readers, North Mankato, MN

6 thoughts on “#460 – Assassination and its Aftermath: How a Photograph Reassured a Shocked Nation by Don Nardo”