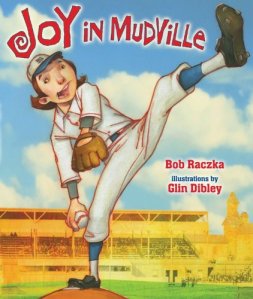 “It had been only twenty-four hours since Mighty Casey struck out, plunging fans of the Mudville team into gloom and despair. But a new game day dawned, and Casey once again proved his might with a homer in the eighth. The Mudville nine took a one-run lead, but in the bottom of the ninth, their hurler walked three straight.

Bases loaded and the starting pitcher spent, the Mudville manager was not bullish about his bullpen. With the game on the line, he called for rookie Joy Armstrong to take the mound. Could she bring joy to Mudville again—and prove that a girl can play ball as well as any boy?”

“He hoped it was a nightmare, / but when Mighty Casey woke, / the headline in the Mudville, Times / read MIGHTY CASEY CHOKES”

Mighty Casey choked the big ballgame, but with another game today, he had another chance to shine. The score was tied zero to zero all the way to the bottom of the eighth when Mighty Casey came to bat. He swung his bat, connected with the ball, and sent it flying over the centerfield fence. At the top of the ninth, the visiting team at the bat, no one had touched home plate. But then the Mudville pitcher lost all steam. He threw twelve balls in a row and loaded up the bases. It would only take one more walk or a gentle single to tie the game up.

The manager sent his pitcher to the locker room and decided to go with an unknown, someone the other team would have never seen. Now standing on the pitcher’s mound, waiting to deal a fatal blow, was Joy—a girl—and everyone booed. The first pitch flew past big old Jack, who immediately complained. The umpire just looked at Jack and yelled, “Strike one.” Joy looked at her catcher, waiting for a signal, and when she saw the sign, she wound up and delivered strike number two.

At bat, Jack was not a happy hitter. He stared at Joy’s wind-up wondering what to do. But when Joy laid up pitch number three, Jack was ready for her throw. He laid the bat down low and butted down the line. The runner on third barreled toward home plate and the tying run. The catcher crouched, ready for the ball, to tag the runner out. Joy fielded that bunt, but when she went to scoop it up, she had no time to spare. Did Joy find a way to shut the runner down, or would Mudville need to take their bat at the bottom of the ninth?

Joy in Mudville takes on the pacing of the original Casey at the Bat with great success. The story reads with the singsong quality that makes picture books a joy to read. I love the story and the crowd’s reaction when a girl steps up to the plate in this extremely tight situation. It would only take one base to lose the game. When Joy looks at her catcher—looking upside-down through her legs—the illustration is a bit disconcerting, just as it should be. What happened next came as a complete surprise. It was not the strike that amazed me, but the type of pitch little joy threw.

Big Jack was not happy either, trying to get the umpire to object, but instead he objects to Jack and calls strike one. The crowd goes wild. All it took was one great pitch for the home crowd to forget their pitcher was a girl. I was not sure what the author was trying to say until the second pitch, which was stranger than the first. Great hitters know how to adjust and that is just what Jack did. On the next crazy pitch, Jack reaches for the ball and bunts it down the third base line. Enough confusion reigns for the other team to score. It would take a miracle to stop the runner.

It was up to Joy to catch the ball and take the runner out. I like the descriptive words used to describe the action. Much like the old-time radio announcer, the author spun a good game, keeping the situation tight and tense. The best twist is using a female pitcher, with the name Joy. She pitched some crazy pitches, but Mudville could not have any joy unless Joy wins the game. I am sure girls will love this version of Casey at the Bat.

The illustrations made sure the game was during Casey’s time. I loved the old-time park, uniforms, and atmosphere. This is definitely a time when girls would never touch a baseball field, let alone be the pitcher. Joy looks more like a boy than a girl. Her short hair and mannerisms on the mound make her seem more male rather than female. Maybe that is supposed to be part of the charm. Of course, a girl could not have played baseball on Casey’s team unless she looked and acted like a boy. Any girl who likes sports, plays any sport, or wishes she could, will love this new version of Casey’s winning game. Boys will like it too, but may not openly admit it. Joy in Mudville makes a great bedtime story or even a pregame rally tale. I really like Joy in Mudville and think it will do well.

Buy Joy in Mudville at Amazon