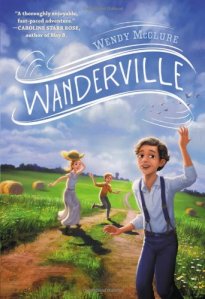 “We ran away from a moving train. We live without parents or other adults. We sleep in trees. We keep our eyes open for “donations”—gifts that “present themselves” for the taking. We’re going to break our friend out of a work farm where they make him dig for rocks. We’ll trick the sheriff so that he can’t find us. And then we’re going to have a feast. Interested? We accept all children in need of freedom. Any kid who escapes from a cruel home or an orphanage or some other terrible predicament can hereby become a citizen.

“Jack didn’t notice the smoke until there was far too much of it.”

Jack, Frances, and Harold, due to reason I will not spoil, found themselves on an orphan train heading west to Kansas. They would soon have a new home, with loving parents, maybe siblings, but definitely a better life. Only problem was, all of that was a lie.

On the orphan train, Jack and Frances had heard horrible rumors about the life each would have in Kansas. Frances grab her brother, and together with Jack, they jumped off the train. Now a sheriff was looking for them, as was a two-faced, puffy mutton sleeve wearing “monster” from the Society for Children’s Aid and Relief.

Just outside the town of Wanderville, the three kids met Alexander. Alex had been on an orphan train some time ago. They placed him at a farm—a working farm and he was the work, along with other kids from the orphan trains heading to Kansas. Each day they dug up rocks, played a short while, and ate. That was their days, except they also were beaten, kicked, tripped, whipped, and punched all for mostly silly non-existent reasons. One day Alex escaped. The he founded Wanderville. Jack, Frances, and Harold became citizen number two, three, and four, in no particular order.

Soon trouble occurred. Harold wandered and found himself loaded onto the Pratcherd’s wagon and taken to their farm. Harold dug up rocks, ate boiled potatoes— if it were a Thursday—, and waited for Frances to come get him. Would Frances go get her brother? Could she go get him and what about Alex and Jack? Could they help Harold escape the Pratcherd’s work farm or would Alex be afraid to return.

Wanderville had me reading the story of orphaned kids in one day. The pages kept turning despite the hour. The story of Jack, Frances, Harold, and Alex instantly grabbed me and never let go. I still think about it now. Jack, an “orphan” with two parents, was loaded onto an orphan train because the sight of him caused too much pain to his parents. Frances and Harold, who had roamed from place to place, were actual orphans now in a worse predicament than when they wandered the streets.

Then there is Alexander, a young boy with huge dreams and an imagination to match. He builds Wanderville for every child who needs freedom from oppression. He builds a hotel, a courthouse, and even a pantry he keeps full of eggs, meat, and other necessities. Alex is the foundation of Wanderville. The idea of children running a town for children was an idea I immediately took too. It sounded inspiring, and it is. It sounded dangerous, and it is. It sounded wonderfully fun and imaginative, and it is.

The  characters could be gems if more developed. Still, some will invoke hope, like Mrs. Routh. Others fear and loathing, like all of the stereotypically “evil” Pratcherds including Rutherford, a boy no older than Jack or Alex. Sheriff Routh is a curious fellow. Which side is he on, the Pratcherds and the horrible law, or with his wife and her enlightened views? The orphan trains actually ran from 1853 and 1929, taking orphaned and homeless kids from the crowded eastern US to the wide-open areas of the west and new loving foster parents, (many adopted these kids though sometimes kids became indentured servants).

Packed with action, kids will love this story. I think kids will enjoy the imaginative Wanderville and its laws. They may shiver at the farm conditions, but will enjoy the humor layered into the scenes. The Pratcherds cruelty is horrifying as is the sheriff’s complicity. Kids will walk away with lots to think about after reading Wanderville. Bullies are not just ill tempered children. Adults and institutions can be bullies. Is it possible to befriend a kid who once mercilessly bullied you? What rights do children have in society?

The only thing I must say I did not care for is the ending. Wanderville ended with a thud! Like an old black and white film that ends seemingly mid-story with “The End” written out so movie goers know it is time to leave, so does Wanderville need “The End” to let its readers know to stop turning the pages, for now. Loose threads abound, left behind to dangle in the Kansas wind. I will not say more to avoid spoilers.

Ending aside, Wanderville is a wonderful story with almost wonderful characters. I absolutely love this story. If major moviemakers are not jumping on this story, it is only because the characters are still stiffly developed.  Kids will love the action, the tempo, the creative town the kids develop. Parents will like the generally wholesome kids, caught in circumstances most did not make. There is definitely a lesson in Wanderville teachers can use, if only the history of the orphan trains. I loved Wanderville. I truly think kids will too, and for confirmation of this, check out twelve-year-old Erik’s review here.

Wendy McClure talks about Wanderville and the Orphan Trains

Get your copy of Wanderville at Amazon

Other Books by Wendy McClure

The Princess and the Peanut Allergy