I wrote this review back in December, thought I posted it, and then realized yesterday that I had not, thanks to a fellow reviewer. Thanks Erik. I guess you win this by default. 🙂  HERE is Erik’s review.

So here, in the old style of my reviews, is Frank and HIs Friend., a comic from the 1970’s–had it been around then.

Fran and His Friend invite you to transform a cardboard box into a rocket ship or race a car and zoom off with them for fun and adventure. Whether the are leading an expedition in the backyard or outsmarting mom’s broccoli, Frank and His Friend prove that kids have a better grasp of what’s really important in life.

A high-spirited young boy spends his days going on adventures with his friend, a raggedy-like stuffed toy he calls Frank. It appears that Frank causes all sorts of mischief, like breaking windows or knocking things off tables, while the young boy is always an innocent bystander, yet takes Frank’s punishments. With such a strange relationship, how could you not love this comic strip from the seventies? Or not remember it?

I would have been hooked on these two mischief-makers had I seen them in the comic pages of the newspaper. Frank and His Friend will have parents laughing as much as their kids. The style of this comic reminds me of Dennis the Menace or Calvin and Hobbes. What is nice for today’s children is the nameless young boy. Whether he is encouraging mom to get rid of all broccoli from the house or sending Frank soaring into space on a homemade rocket, today’s kids can see themselves as Frank’s friend.

The strip found syndication in 1975 and ran for 9 years when it ceased due to the creator’s premature death. He was 39-years-old. Newsarama.com calls Frank and His Friend “extremely clever reproduction.” Curio and Company, a “mock-nostalgia company,” make books “from comic strips and cartoon series that never existed (though) it might seem that way.” Even the publisher, Ringer Publishing is a . . . ringer.

Yep, Frank and His Friend never existed in 1975, nor did its creator, Clarence “Otis” Dooley. They are both from the imaginations of Cesare Asaro (aka Melvin Goodge), and written by Kristie Shepherd. This is not a hoax. Their company, Curio and Company is real and the duo are doing real work, having thus far “re-imagined” six comics al available in book form. 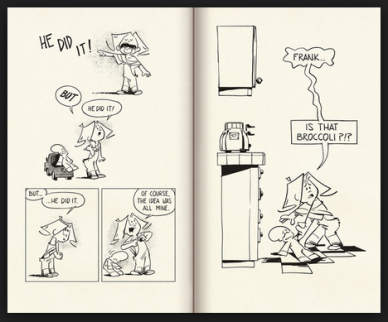 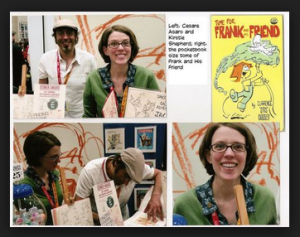