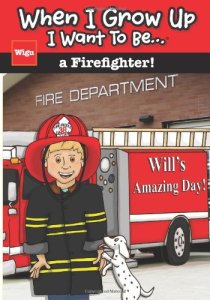 When I Grow Up I Want To Be…a Firefighter!

“Will was excited to go on his class field trip, until he learned they would be touring the local firehouse. Now, he is dreading the trip. For as long as he can remember, Will has been afraid of fire and, worse than that, firefighters! Though he knows firefighters are heroes who do dangerous work, to him they are giants in heavy coats and masks. Can Will overcome his fears and maybe even learn something surprising about himself?”

“Will was sitting in his classroom at school when his teacher, Miss Elyse, made the announcement.”

Will’s class is going on a field trip to a firehouse. Will is afraid of fire and firefighters. Firefighters are right up there with monsters, even though he knows firefighters are heroes who protect our stuff and us. Still, firefighters are “huge” plus “they run out of the smoke and fire swinging axes.” On the bus, Will still worries about the trip. His friend Tommy is all excited, ready for anything. 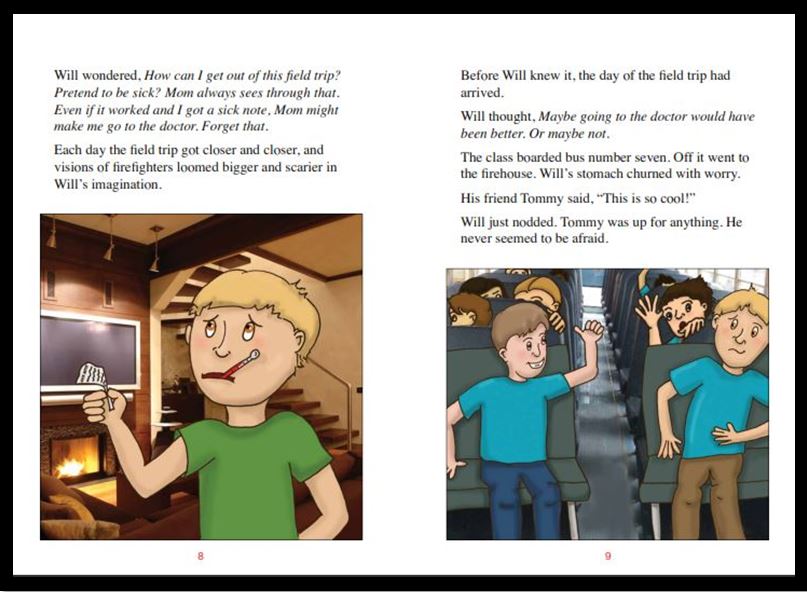 A fireman wearing a baseball cap and a t-shirt, not a mask and a giant coat, greet the kids. Will tries to convince himself the fireman is not scary, but this one is the Captain. The Captain tells the kids the firefighters train hard, and that the six firefighters at this firehouse are “First Responders.” Will sees that the firehouse is also the firefighter’s home while on duty. As he begins to relax, Will imagines himself as “Captain Will,” the firefighter with the biggest office. The firefighters also have some cool stuff, like a shiny fire pole and two Dalmatians. Who knew they could have pets?

Out of nowhere, a firefighter slides down the gold fire pole, in full firefighter gear. Captain Kirby said, “Did you know that a lot of kids are frightened of firefighters?” Will understands. The firefighter crawls toward the kids, as if saving them in a fire, making at least one jump back. When the mask finally comes off, Will decides the firefighter is not at all scary-looking. Before the kids climb back in their school bus, Will helps aim the fire hose, receives a Junior Firefighter Badge, and hops up onto the fire engine—in the driver’s seat!

When I Grow Up I Want to be . . . a Firefighter stands up to its predecessors—be in the Army and be a Teacher. If anything, the series is getting better. Will is a believable character. He gradually lets down his guard as he learns more about firefighters. Will’s fear of the GIANT firefighter was shattered as the firefighter, who suddenly slides down the fire pole, and crawls toward the kids, scaring a few, turns out to be . . . a girl! Even the Captain, wearing a t-shirt and baseball cap, looked normal. Will shares many of his thoughts along the way, yet I am guessing one thought he doesn’t share is, “why was I scared to come here today?” It is evident in his posture and his face that he is finally having fun. 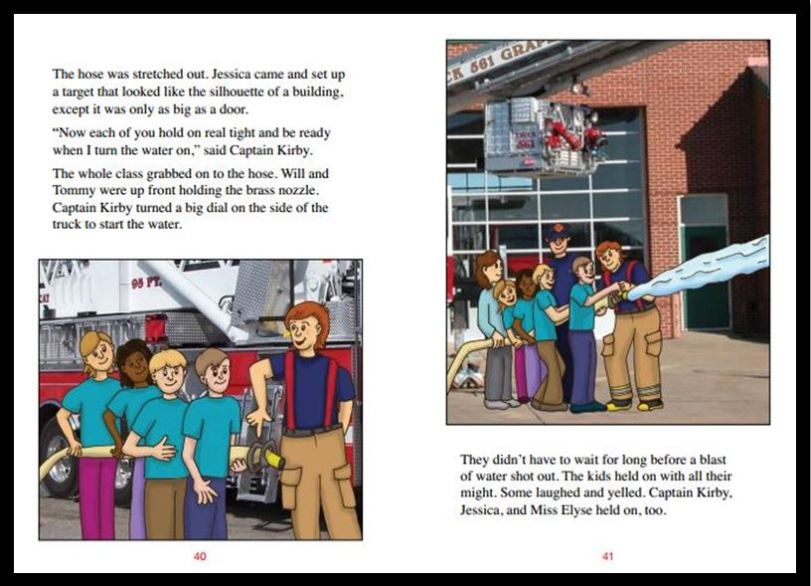 Packed with career details, I Want to be . . . a Firefighter brings the firefighter down to kid level, erasing any fear that can be induce when they wear their full gear. From the contents of the typical firehouse, to various emergency response vehicles, Will, and the reader, learns what it takes to be a firefighter and what the job entails. As a take-away, there is s Home Safety Check List and a sample Home Escape Plan in the back of the book.

WHEN I GROW UP I WANT TO BE  . . . FIREFIGHTER. Text and illustration copyright © 2014 by WIGU Publishing. Reproduced by permission of the publisher, WIGU Publishing, Laguna Beach, CA.

Buy I Want to be . . . a Firefighter at Amazon—B&N—WIGU Publishers—your local bookstore.

Learn more about the uthor, illustrator and publisher WIGU Publishing at their website:  http://whenigrowupbooks.com/