#544 – Beneath the Sun by Melissa Stewart & Constance R. Bergum 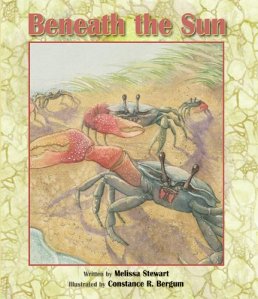 “When the sun is scorching, you put on sunscreen and run under the sprinkler to stay cool. But how do wild animals survive in the heat? Journey from your neighborhood to a field where an earthworm loops its long body into a ball underground, to a desert where a jackrabbit loses heat through its oversized ears, to a wetland where a siren salamander burrows into the mud, and to a seashore where sea stars hide in the shade of a seaweed mat—and learn of the many ways animals carry on in spite the sun’s sizzling rays.”

“On the hottest days of the year, the sun rises early. Its bright light shines down on us, hour after hour.”

Beneath the Sun explains what some of the earth’s creatures do to beat the heat when temperatures rise to unbearable levels. We humans, we get wet. Children enjoy sprinklers, swimming pools, and fire hydrants as three ways to keep cool in the heat of summer day. We also can use sunscreen to avoid burns and air conditioners to keep cool indoors. And air conditioning service for the emergency repair.

Animals are not so lucky. They need to rely on instinctive measures and Mother Nature to survive the blast of the sun’s rays. Divided into four ecosysems, the book gives examples of animals defeating the sun’s effects in a field, on a seashore, in a wetland, and in the desert. For example, in a field, the woodchuck takes advantage of the cooler morning to munch on grass and then beats the heat of the open field’s sunrays by staying in a cool underground cave during the worst of the day’s hot weather. In the wetlands live the osprey. The male osprey stays cool by soaking his feathers in water, and then upon returning to his nest, his children soak the water from his feathers. 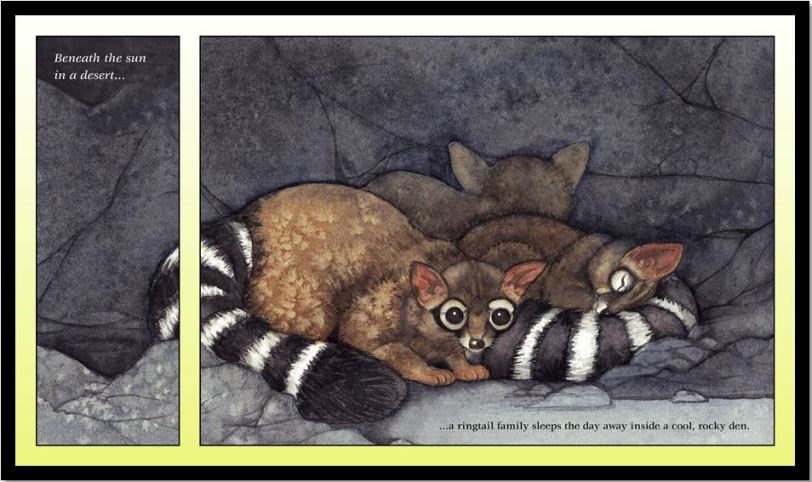 The herring gull, who lives on a seashore, fans its wings to protects its young from the sun and then pants like a dog to keep itself cool. Kids will love reading that, as they will the turkey vulture who must protects itself from the treacherous desert sun and harsh heat. It accomplishes this by spraying urine on its legs. The author is good at presenting—in two or three sentences—these odd heat beaters kids will enjoy learning.

The illustrations are realistic, as one would expect in a nature book such as Beneath the Sun. The images take children to each ecosystem with enough detail to be able to turn a page and know where the featured animal lives. The illustrations also frame the animals inside one complete day. Bergum did this by her watercolor end pages. The front depicts the sun rising and the back depicts the cooler end of the day. Returning to children at the end of their day completes a circle of time even the youngest can understand.

Beginning each book with the things children do when it gets too hot and sunny to play outdoors, framing the entire animal kingdom so kids can relate to the other species. The same holds true in When Rain Falls

(2009),the two former editions of a series comparing children’s activities to those of other species. Similar to At the Same Moment, Around the World (Perrin, Clotilde, 2014), the different environments simultaneously occur during the span of one day, an easy concept children can grasp from this well-written picture book. 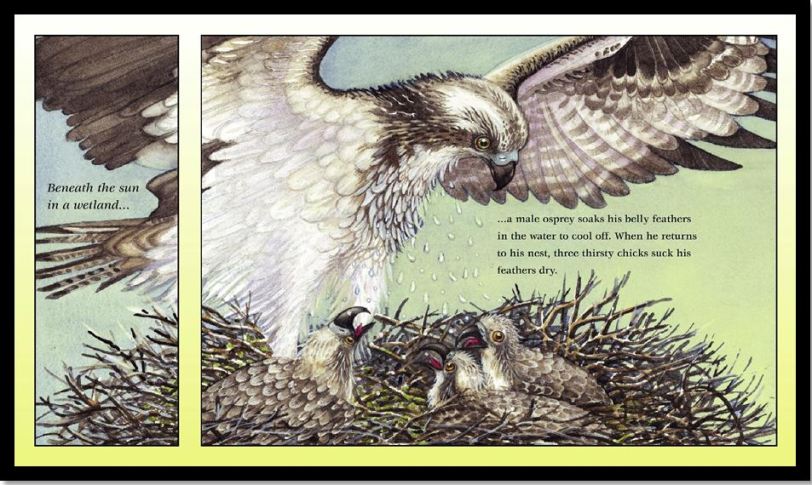 BENEATH THE SUN. Text copyright © 2014 by Melissa Stewart. Illustrations © 2014 by Constance R. Bergum. Reproduce by permission of the publisher, Peachtree Publishers, Atlanta, GA.

Learn more about Beneath the Sun HERE.

Meet the author, Melissa Stewart, at her website:   http://www.melissa-stewart.com/

Meet the illustrator, Constance R. Bergum, at her jacketflap:   http://www.jacketflap.com/constance-rummel-bergum/30188

Find other wonderful books at the Peachtree Publishers website:   http://peachtree-online.com/

Claude at the Beach