#546 – Cat Says Meow: And Other Animalopoeia by Michael Arndt

Cat Says Meow: And Other Animalopoeia

“Dog says woof . . . pig says oink . . . cow says moo. Animals and the sounds they make are paired up in playfully compelling ways in this eye-catching illustrated gift book featuring bold colors and an engaging use of onomatopoeia. Kids and parents will delight in discovering the ways in which the letters that spell out each animal’s sound are key elements of that animal’s illustration. With so much to see and to sound out, kids will relish this unique visual and educational experience, brimming with color and letters.”

How do you say hello? Ask any of the animals in Cat Says Meow and you will get the answer you probably are expecting, but the animal may look a tad different from normal. The duck still says quack, but look closely at the animal that just spoke to you.

There is something odd going on. Still, if it looks like a duck, and it quacks like a duck, then it must be a  . . . wait a minute, that duck says “quack” and it is made out of the letters quack, which spells “quack!” This has to be a coincidence. 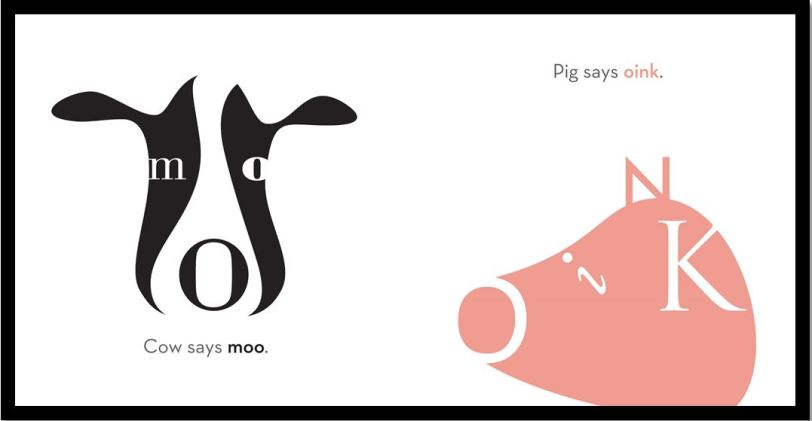 Well, there are 25 animals in all, each greeting you in their native tongue, and each looking mostly normal. Take the cow. It greets you by saying, “Moo.” It looks normal as normal can be . . . wait, again. This cow is a bit odd looking.

Its left eye looks more normal, but still it looks suspiciously like an “o.”

There is a definite trend going on. A random turn of the thicker than usual pages brings me to an owl, which says, “Hooo.” An owl that looks like “hooo” and says, “Hooo.” Interesting. A pattern has definitely emerged from Cat Says Meow. Every animal, on every page looks like it sounds.

The author calls this animalopoeia, a word he has trademarked. Each animal, which the author also drew, looks like it sounds. A dog is “woof,” a lamb is, “baa,” and a horse is “neigh.” Onomatopoeia means words that sound like the actual act or thing. The words cough, growl, and boom are onomatopoeia. In Cat says Meow, all of these words are animal sounds. The author has coined these sounds Animal*opoeia. This is Michael Arndt’s debut children’s book.

Cat Says Meow is a great little book for teaching your child about 25 common animal sounds. As in reading, the words in each animal shape are formed from left to right, top to bottom. The large, singular illustrations little kids will easily recognize and will enjoy speaking like the animals and hearing you do the same.

Michael Arndt explained Cat Says Meow and Other Animalopoeia and animalopoeia in particular, “[aim] is to promote verbal and visual literacy as well as foster a love of animals at an early age.” Part of the Arndt’s proceeds from Cat Says Meow go back to animal rescue organizations, groups that are also dear to me. The next time you hear a familiar “meow” and think it is your Fluffy, take a quick look,  it could be an animalopoe*ia.

Youtube video found by Erik at ThisKidsReviewsBooks. His review is HERE.

Learn more about Cat Says Meow and Other Animalopoeia HERE.

Buy a copy of Cat Says Meow and Other Animalopoeia at Amazon—B&N—Chronicle Books—your local  bookstore.

Meet the author/illustrator, Michael Arndt, at his facebook page:  https://www.facebook.com/animalopoeia

11 thoughts on “#546 – Cat Says Meow: And Other Animalopoeia by Michael Arndt”