“Leo is bored, wishing there was more magic in life. He gets big surprise when a mysterious wizard appears and sweeps him away on an incredible whirlwind tour of the animal kingdom!”

“Leo was sitting so bored and so blue.

He couldn’t play Wizards as he loved to do.

His mother had told him ‘Magic’s not real!’

Imagine how miserable that made him feel.

Now he was grumbling, downcast, and glum, /

“A world without magic is simply no fun!’”

Leo could not play the game he loved, one filled with magic, so he sat feeling grumpy instead of doing something else. Soon a wizard arrives and takes Leo on a tour of magic in his own backyard. They start by watching a humming bird hover by a flower as it drinks a flower’s nectar. The Wizard tells Leo the hummingbird’s ability to hover is magical. Next they go to the beach were baby turtles are hatching and immediately walking toward the ocean. No one tells these turtles what to do, they move on an innate instinct the Wizard calls magical. The two continue on to different animals and the “magical” abilities each possess, with the Wizard proclaiming, (or a variation thereof),

After watching a chameleon change its color, a squirrel find nuts it squirreled away now under snow, and a mother penguin find her family among thousands of penguins, the Wizard returns Leo to his bedroom. He tells Leo magic does not always require wands or spells, but in life all around him, if only he will look. 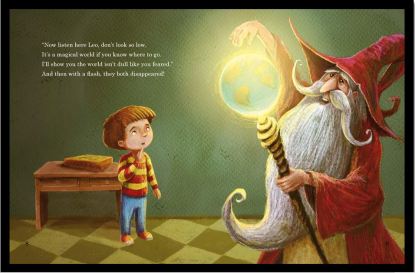 Many things in the animal kingdom are amazing and sometimes unexplainable. The Wizard calls these things magic, or magical, when showing ten these creatures to Leo. It is hard not to agree that a newly hatched turtle immediately taking off in the direction of the sea, no matter the direction they face when hatched, is not magical. Or that the Monarch Butterfly makes it from Canada to Mexico each year without maps or GPS. There are many amazing abilities animals possess that we never consider magic, but maybe we should. How else to explain that an octopus can squeeze into astronomically small spaces or that a  mountain goat can prance about a steep rock and  not fall, thanks to “magical hooves” that stick so well.

The illustrations, softened by subtle dots that run through the paper, have muted color in Leo’s room, where he is glum about not playing his Wizard game. An actual Wizard brings more color with him and each setting, whether the ocean or the glaciers, the illustrations depict very realistic worlds.

The Wizard spins a great tale for young Leo, who comes away feeling much less glum for not being able to play a game of “magic.” The author’s plausible message, that there is magic all around us, is a good message for kids and adults. The story is simple; a Wizard takes a boy on a magical trip around the world to watch select animals. It is hard to resist believing the Wizard’s message too young Leo. We all know some intriguing animals are on this earth and they can do some pretty amazing things, some without a bit of direction or advice. That is possibly magical.

Kids will love this story and after will have a new understanding of their world. I’m sure they will look at their surroundings with a new perspective and see magic where it had not been just minutes before. If we look closely at the world around us on our daily commutes, we may be surprised at what we see. Magical Animals is Ian White’s debut children’s book, and  very good beginning to a new career.

Meet that the author, Ian White, at this website:  http://magicalanimalschildrensbook.com/index.html

I Do Not Want This On My Plate