Welcome to day 7. For this last day of Children’s Book Week 2014, Kid Lit Reviews presents Capstone, a dynamic publisher well-known for their children’s books. Yesterday, Chronicle Books sponsored Lately Lily: The Adventures of a Travelling Girl. There is still time to win Lately Lily, or any of the other prizes showcased this week.. Today, Capstone presents Bear’s Big Bottom by Steve Smallman & Emma Yarlett. To WIN this hilarious new picture book LEAVE A COMMENT! Then, CLICK HERE for EXTRA ENTRIES!   And as an extra bonus, Capstone is offering Lost Little Penguin to three winners! Kidlit is such a generous genre.

“Bear was friendly / Bear was sweet / The nicest bear you’d ever meet! / With little paws and little feet / And a very BIG bear bottom!

Poor Bear! His bottom is causing chaos…Bump! Crash! Splat! Soon Bear is in great big trouble! Can he ever make it up to his friends? A hilarious story of bottoms, bears, and animal friends that will have children giggling at Bear’s bottom-based mishaps. From children’s favourite Steve Smallman, author of Smelly Peter, the Great Pea Eater and The Monkey with A Bright Blue Bottom.”

I like Bear’s Big Bottom. Bear is a nice bear and has some nice friends who are tolerant of his big bottom, until his big bottom breaks the camel’s birthday cake. It was actually squirrel’s cake, but the point is, they couldn’t take Bear’s big bottom anymore and told his just that. Not exactly nice of Bear’s friends to say what they said, but sometimes patience runs thin. Any kid who is different, for any reason, understands Bear’s plight. Good friends will tolerate your differences, but even good friends have a breaking point, not usually all at the same time, which is what helps keep a group of friends together.

I like that the group conscious got the better of Bear’s friends and they went looking for him. Conflict must ensue in a good story and so enters the fox, ready to eat their bottoms. The group of friends need Bear’s help. Do you think bear went to help? Bear is a good friend. Good friends stick up for each other, especially if picked on by someone outside of their group.

Originally published in Great Britain by Little Tiger Press (2013), Bear’s Big Bottom came to America and Capstone written in English. I was surprised to learn that an entire verse was changed. In the U.S. the verse reads:

In fact, Bear’s bottom was so wide

it filled the couch from side to side!

“Because of Bear’s big bottom!”

The original verse, as written by Steve Smallman, the author, reads:

“But when they tried to watch TV

And no one could sit comfortably

Because of Bear’s big bottom!”

I’m guessing the problem word is “settee,” meaning a sofa. It’s too bad those who made this decision where shortsighted in thinking no one would understand a settee is a sofa, upon which one sets their bottom. What happened to looking up unknown words, expanding one’s vocabulary, using a dictionary? Do kids no longer do any of those things? Beside the change for settee’s sake, the verse went from an original rhyme scheme (TV, settee, comfortably), to an easy scheme (wide, side, cried). Personally, I much prefer the original verse. The words are punchy (“pop-pop-pop-pop!”), like all the other verses.

Bear’s Big Bottom is a terrific book for anyone who is different or has a “different” friend. Some differences, like a big bottom, should not make friends go away. Everyone is different in some way; just not all are as obvious, or as intrusive, as Bear’s BIG bottom. Most people like being around others like themselves, not someone who is different. The animals show that being with someone different may, one day, save your bottom. This hilarious, brightly illustrations show wide-eyed animals often in spreads running full width. The cockeyed ending will tickle funny bones. Your little one may want you to reread Bear’s Big Bottom from the top. Let the author help. His reading of Bear’s Big Bottom is hilariously entertaining, but then, these are his characters.

Capstone Young Readers is an imprint of Capstone. 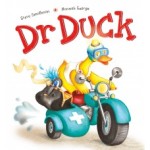 Orion and the Dark

My Daddy’s Going Away

This is it. The LAST DAY you can ENTER TO WIN Bear’s Big Bottom or any of the other prizes seen this week, by LEAVING A COMMENT. In addition to all the those prizes, Capstone is also giving away Lost Little Penguin

“When Plip the penguin loses his favorite toy, it seems like the end of the world! As the sky grows dark, Plip runs off to find it, all on his own. What will become of poor little Plip, out in the snowy storm?”

So let’s recap one final time. Here is what YOU CAN WIN! — How to Enter? LEAVE A COMMENT and then  CLICK HERE for EXTRA  ENTRIES!

.
WIN Bear’s Big Bottom by LEAVING A COMMENT below this review. For additional entries, and MORE CHANCES TO WIN Lost Little Penguin, and other wonderful children’s books, CLICK HERE TO WIN!
.
Terms and Conditions HERE