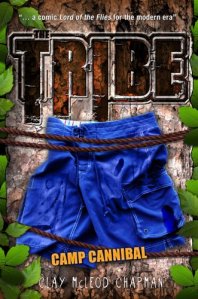 “Since being expelled from giving the Greenfield Middle School student body an “explosive” case of food poisoning and sent to live with his father, Spencer Pendleton hasn’t exactly been doing his best to put the past behind him and settle into his new life. What with losing the girl-of-his-dreams and gaining a there-but-absentee father, his life still has a few kinks to work out. And when his single-minded quest to track down the Tribe and reunite with Sully lands him at Camp New Leaf, Spencer is convinced things can’t get much worse. WRONG!

“Not only is Camp New Leaf no ordinary camp, but it appears that the Tribe hasn’t laid the past to rest either. And what better place to catch up with an old member—or recruit a few new ones—than a secluded camp for “troubled” boys. With rebellion in the air, Spencer must find a way to stop the Tribe’s plans to put down roots and expand its ranks before someone gets seriously hurt—or worse.”

A. I’m dead and buried somewhere in the woods surrounding Camp New Leaf, my body now a buffet for maggots,

B. I’ve been arrested and am serving a life sentence for crimes I didn’t commit,

Way back in book 1 Spencer meet a group of kids—the Tribe—living secretly in Greenfield Middle School. Not having read the first book—though I really want to—I only know that the Tribe and Spencer had some outs of sort. I think it may have had to do with Sully, a beautiful girl Spencer fell for but another Tribe member, Peashooter, objected for some reason. The Tribe poisoned lunch at the middle school causing the entire student body to have extreme diarrhea. Spencer was to blame, so said the principal and a judge. They asked him to stop blaming his imaginary friends and take responsibility.

Spencer also went to live with his father, who had never been a real father or held up his end of responsibilities, ducking out because of work whenever he was to do something with or for Spencer. With mom now fed up and unsure what to do with Spencer, Dad gets his turn. He continues to skirt his responsibilities and when he gets tired of Spencer’s antics, enrolls him in Camp New Leaf, a summer camp for troubled boys.  Not long after arriving at the camp, where many of the campers were returning campers, Spencer felt watched the way the Tribe watched him at his old school. By nightfall, The Tribe had taken control of Camp New Leaf. Spencer got new quarters outside in a makeshift cage, and the youngest campers ran ram shot around the grounds. The Tribe stopped all medication cold turkey—using it on the camp director and his camp counselors. The no medication adjustment period brought out interesting behaviors. Spencer actually thinks clearer when off the medications he never should have been prescribed.

Soon supplies begin to run out and the boys get tired of the Tribe’s rules and “training.” Anarchy prevails just as the parents arrive for Parent’s Day.

Book 2 can stand on its own, but I would not recommend reading it before reading book 1. I think there is one more book to arrive and I would get these two finished before then, whenever “then” is.

The Tribe is interesting, imaginative, and incredibly spellbinding. Imaginary friends, who are not imaginary, but also never seen by anyone but Spencer, live in the middle school. They recruit Spencer, something breaks the bond, the Tribe retaliates, and Spencer catches blame for a horrendous crime committed by the Tribe sans Spencer. In the process he loses his home, the police keep him on a short leash, and then dad sends Spencer away for the summer to a soft therapy camp disguised as a summer camp. But the Tribe are not far away, having lived the past six months in the woods surrounding the camp, which is at least fifty miles from civilization.

Camp Cannibal grabs you immediately and ties to the story. Pages fly by on their own as your gasp at the horrors, laugh at the inane, and wonder if this whole situation were actually possible. Could a summer camp go berserk? The characters standout, nearly every one of them. One dad wants to know what is going on and you can see him standing there, demanding answers with this confused and angry face. You can feel his frustrations and inner horror at what his child is doing and might possibly have become. The Tribe is a wonderful middle grade novel, but one for older kids with more advanced language comprehension and moral compasses.

If you want a story to grab you from page one, to hold you captive just like those at camp, and then free you with a thud as the ending becomes nothing you thought it would, The Tribe is your cup of spiked tea. The ending is shocking, surprising, and most definitely heartbreaking. By the last word you must, absolutely must, read book 3—if only to find out Spencer’s fate. For now, hold your kids tight, tell them you love them, and be available to them every moment they need you and then when they don’t. Be careful. Believe all imaginary friends are real—until they are not.

Note:   I should have said, but only just came to mind, that the story is a cautionary tale against conformity, against blindly following, and a warning to choose your leaders wisely. A think it is one of the best this year.

Meet the author, Clay McLeod Chapman, at his website:   http://claymcleodchapman.com/

an imprint of Disney Book Group

All Schools are the same and Spencer Pendleton expects no less from Greenfield Middle. But Spencer hasn’t met them yet-the Tribe, a group of runaway students who secretly own the school. They live off cafeteria food and wield weapons made out of everyday school supplies. Strangely, no one seems to know they exist, except for Spencer. And the group wants him to join their ranks. All he has to do is pass the initiations…and leave his mother and life behind. Can Spencer go through with it? Better yet, what will happen if he says no?.