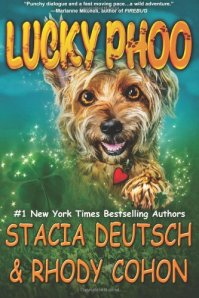 “Seventh graders Caylie Jiang-Kahn, Lauren Blindell, and Sabrina Robinson are making a movie about their friendship when a dirty stray dog shows up and ruins the day. In frustration, Lauren mutters, “Oh phooey,” which leads to the girls naming the dog Phoo.

“When Phoo is caught and taken to the animal shelter, the girls agree to foster him until he can be adopted. They immediately notice something strange. Every time the dog is around, lucky things seem to happen. The moment he’s gone, the luck disappears.

“What happens when they all need the dog’s magic at the same time? It’s up to Carlie, Lauren, and Sabrina to decide once and for all:  Is Phoo truly a lucky dog?”

“Scene one. Take one.” Sabrina Robinson adjusted the zoom and focus on her digi-cam. “Ready.” Squinting, she surveyed the scene.

Carlie, Lauren, and Sabrina try to make a film about their VBF relationship but two sixth grade “Meaps” interrupt, grab Lauren’s script, try to muscle in on the movie. A dirty, stinky, stray dog rams his head into one of the Meap’s leg several times, dirtying her nice expensive white jeans. When all is done, they take the mutt runs off. Someone takes the dog to the animal shelter, who in turn call Sabrina telling her her dog is at the shelter, please take him home. The three girls agree to foster care the dog, which is a cute little guy when all cleaned up. All works well. Actually, all was better than fine. Whenever Phoo was around, that girl had good luck. Lauren dates her crush, Caylie gets a job walking dogs, and Sabrina plays the best games of tennis she has ever played.

Everything works out great until the day all three “need” Phoo all day. It had been Carlie’s time with Phoo, but it was now over. She needs Phoo’s luck while pet sitting and dealing with the Meaps, so she refuses to give Phoo to Lauren, who was going on another date with Jorge; or to Sabrina, who has a major tennis tournament that is vital she wins. In the end, it matter none as Phoo ran away while the girls argued. Life gets worse without Phoo, who will need a new foster home . . . if ever found. The worse outcome of the three girls’ fight over Phoo is the destruction of their VBF.

Lucky Phoo. He may not be as lucky as the girls believe. Sure good things happen when he is around, but when he leaves life gets weird in an unlucky way. As with most pets, Phoo adopts the girls, not the other way around. He listens and obeys them, loves being with them, and really does seem to bring the threesome luck. After one of the Meaps (a new “word” formed by combining Mean and Popular) grabbed Lauren’s script and took it home, Lauren was humiliated at school. She has a secret crush on a boy—the only one with initials JH in seventh grade—and wrote his initials with hers on the back of her script. Now the Meaps are in the school hallway, a busy hallway, exposing Lauren’s secret to all, including JH: Jorge Hernandez. I think it odd that a sixth grader, popular or not, would have that much leverage over a seventh grader, let alone a group of three.

With Phoo at Lauren’s house, she feels he’s brought her luck when Jorge invites her for a coke at his aunt’s restaurant. Their first official date! Before she leaves, Lauren excitedly agrees to a second date. Of course, it must be Phoo, Lauren thinks. She has little to no confidence around others, especially when it is a group, at times becoming physically ill. Lauren does not realize she has more confidence and “self-luck” than what shows. To one degree, all three girls have more than they believe or show. Phoo simply brings it out of them. Dogs—and cats—have a way of doing that.

Lucky Phoo gets his luck from the two award-winning authors that work together writing the story. All of the characters sound like a normal kid of their age. The dialogue is spot on! There are a few odd sentences that have a word missing, usually an “a” or “the.” This happens several times, tripping me up—very annoying. The final print needed a line-by-line check for accuracy. The text flies by and before you know it, it’s over. This is a good length for seven and eight graders, and even for advanced reading sixth graders. Nothing in the story for parents to fret over, except the mud on Phoo.

I thoroughly enjoyed Lucky Phoo. Another story with the same characters would make my day. Each character is easy to visualize, as are the settings, even two days later. The writing is crisp, stays focused, and challenges the characters in surprising ways. I think kids will enjoy reading Lucky Phoo’s story. There is enough action to keep boys interested in what quickly seems like a girl’s novel. Just stick with it boys and you will be rewarded.

Learn more about Lucky Phoo at his website:   http://www.luckyphoo.com/

Meet the author, Stacia Deutsch, at her website:   http://staciadeutsch.com

Meet the author, Rhody Cohon, at her website:     http://rhodycohon.com

Cloudy with a Chance of Meatballs Movie Novel

Lincoln’s Legacy (Blast to the Past).

King’s Courage (Blast to the Past)

Lucky Phoo looks a lot like Maguire, who is adoptable.

Maguire is a handsome Yorkshire Terrier with a beautiful coat of silver gray (blue) over tan. He is an older gentlemen. We think perhaps he is around 7 or 8 years old, so he has a birthday of 11/4/06. He was found in the middle of nowhere, literally. The couple that found Maguire lives in the middle of 85 acres of land and he was in one of their fields. They took him in and kept him until we had room in our foster system for him. Once Maguire warms up to you he can’t wait for you to sit down and be in your lap. When you first pick him up to hold him he is stiff, however in a few moments he relaxes. I am already neutered, housetrained, purebred, and up to date with shots.

If you have the patience and love for this quirky little man, Maguire will be your friend for life. ADOPTION FEE REQUIRED. CONTACT US AT 615-661-5333 or ccrnewengland@gmail.com   website: Adopt-a-pet.com  http://www.adoptapet.com/pet/10261261-salem-new-hampshire-yorkie-yorkshire-terrier

For other Yorkies, check out Adopt-a-Pet HERE!