Before we start today’s review, I wanted to let parents and kids know about a summer program they might enjoy and earn some bucks! Wigu Publishing is sponsoring a summer initiative called the WIGU Summer Superstars.

Kids can earn money by reading and writing all summer long. Read 20 minutes a day and you could win a $20 Amazon gift certificate or $100 cash. Those who prefer to write can win a $25 or $100 Amazon gift card and their school library can win $1000 donation from Pick Up Please Harahan. For more information Go HERE and start your summer off right! 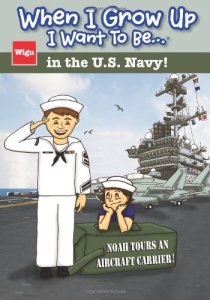 When I Grow Up I Want To Be…in the U.S. Navy!: Noah Tours an Aircraft Carrier!

“Noah is excited for the chance to tour a real aircraft carrier with his Grandpa Ed, a proud Navy veteran. He is not excited that his little sister, Marina, is tagging alone. Still, Noah tries to be patient. Readers chuckle and follow along as the siblings learn that each deck, each crewmember, and each piece of equipment adds another chapter to the history of the U.S. Navy and its mission to protect our country. Noah and Marina’s curiosity helps introduce readers to the complex and exciting work of an aircraft carrier and how each crewmember plays a vital role in its functioning.”

“Noah was excited. A U.S. Navy aircraft carrier had come into port. Everyone was invited to visit. Noah’s Grandpa Ed promised to take him!”

Noah and his Grandpa Ed—plus a tag-a-long younger sister, Marina—visit a U.S. Navy aircraft carrier while it is in port. Quickly into the story are pictures of the Navy Seals, helicopters landing, and planes taking

off from a carrier, and a huge gold anchor. The diagramed USS Gerald Ford should interest model ship-builders. Throughout . . . in the Navy, various photographs visualize life on an aircraft carrier; what it is, who is on one, and why it exists. The general theme is protection of the U.S.

If you talk about ships, kids often think about pirates. Noah is no different. He learns pirates do still roam the oceans, marauding ships for their

goods. Marina is pleased to learn there were girl pirates then and possibly now.

The three tour most of the important decks, including the bridge, flight deck, bunks, and the cafeteria where it smelled of French fries and, yes Marina, ketchup was available. Marina delivers

the majority of humor, though Grandpa Ed has a few good lines, most of which adults will catch faster than kids will. By the end of the book, both kids have decided the U.S. Navy is for them. Noah plans to be a pilot, while Marina decides to be a captain, taking the title right then. Both Noah and Captain Marina have a great time visiting the aircraft carrier. There is a thread left hanging:  was Grandpa Ed ever in the brig?

Boys will especially enjoy . . . in the Navy, though girls should check it out as well. . . . in the Navy includes illustrations of every current type of aircraft carrier used by the U.S. Navy. This Wigu edition makes a nice adjunct text for teachers planning lessons about the military.

As with the other When I Grow Up editions, in the Navy is loaded with useful information kids will enjoy. Whether as a reference or looking for a career, kids will find in the Navy useful. It is one more edition in the ever-growing series of When I Grow Up series that can help kids think about their future . . . until they change their mind. But that’s okay. Wigu publishing is planning tons more books for this series, so kids can keep changing their minds until they can say, “This is what I what to be when I grow up!” 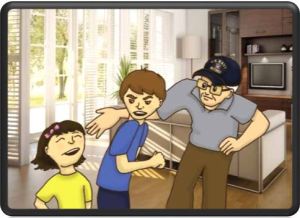 WHEN I GROW UP, I WANT TO BE . . . IN THE NAVY!:  NOAH TOURS AN AIRCRAFT CARRIER. Text and illustrations copyright © 2014 by Wigu Publishing. Reproduced by permission of Wigu Publishing, Laguna Beach, CA.

Buy . . . in the Navy and other editions at Amazon

Learn more about the When I Grow Up series HERE.

Find other When I Grow Up editions at the Wigu Publisher’s website:  http://whenigrowupbooks.com/