Colt Humboldt and the Close of Death

by T. A. Anderson

“When twelve-year-old Colt Humboldt’s dad drags the two of them from perfectly good Dallas to ancient Edinburgh for a “fresh start,” Colt knows he’s in for a long, boring summer. Fat chance. That very first night, the peculiar Alesone and her little brother Peer crawl out of Colt’s closet, begging for his help to save their family from a horrible fate. Unfortunately, the instructions for doing so are contained in a fickle book that likes to make it up as it goes. Worse, those instructions give this ragged trio one week to journey across Scotland in a impossible adventure to capture three treasures—treasures fiercely protected by a hidden, treacherous world determined to see Colt fail . . . preferably by death. But if Colt and his new friends can survive a horror novel come-to-life, a madman and his minions, a disagreeable folklore legend, and the shocking discovery of just why Alesone and Peter are so odd . . . Well, the next two treasures won’t come so easily.”

“The flight attendant standing along the curb resembled a ripe blueberry volcano about to blow its top, thought 12-year-old Colt Humboldt from the backseat of the taxi. Her head-to-toe blue uniform appeared dangerously close to its design limits, with a blue cap squeezed over short blonde curls and three very prominent chins squeezing out of her collar.”

Not long after Colt’s mother died in a tragic automobile accident—which Colt survived—his dad accepts a position at the Edinburgh Zoo. Colt is not happy about moving from Dallas to Scotland. He chooses The Keepers room for his bedroom, not knowing the room’s history. This begins the history kids will learn about while reading the book. There are many pieces of knowledge inside the story, the biggest being the black plague that wiped out many in Europe.

What Colt thinks are ghosts awakens him the first night. These “ghosts” are actually two kids from the year 1645. Alesone and her five-year-old brother Peter are running from the soldiers who want them back into the close in which the government has trapped all the inhabitants, thinking it will stop the black plague. The two kids are after a cure for their parents. To get the cure and passage back to their own time period, they must complete three missions, which get progressively harder and more dangerous. Colt agrees to help them. He is smitten on Alesone and bored without his friends. 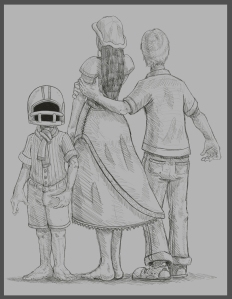 Throughout the story, Colt must explain items that are commonplace in the twenty-first century, but unheard of in the 1600’s. Many appear to be magic to the two kids. Peter has a habit of smashing things he does not understand, like alarm clocks and television sets. Five-year-old Peter experiences his first sugar high after a breakfast of Frosted Flakes™. He loves the cereal so much he sneaks a box home with him. Sugar highs are not common in the 1600’s as they are now. Peter also likes Colt’s Dallas Cowboys helmet, which took an arrow, saving the boy’s life on one journey.

Peter is an interesting character. He never utters a word, is very resilient, and handy in some of the sticky situations the three kids get into. Pretty good for a five-year-old out of his element. Peter also supplies much of the humor. I did think it odd that Alesone, a bright girl, is oblivious to the changes from her world to Colt’s. It takes her quite a while to accept that she is not in her 1645 world, as she continues to search for a pastor from 1645 and runs from/is afraid of the present day police who have no interest in Alesone or Peter.

Kids who like adventures with fantasy and humor mixed in will love Colt Humboldt. I read the 445 pages in two sittings, staying up late at night. If I were a kid, I would have taken a flashlight to bed just to keep reading the book. I love the characters. They are easy to care about and actually fun to root on as they continue searching for the three items needed to send Alesone and Peter back home. Nothing is what it seems on these journeys. Some of the secondary characters suddenly pop up, instantly twisting the story. Colt Humboldt is not difficult to understand or keep track of these twists and turns, but one does need to pay attention. 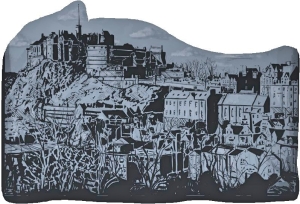 Much of the humor comes from Alesone and Peter being out of place in Colt’s world. He has no idea why they are so surprised by much of what they encounter, not knowing for a long time where the two kids have come from. All he knows is their parents will die if they do not collect the three treasures the Brown Man requires. The Brown Man of the Muirs (folklore) is but one of the folklore and creatures of Scotland legends included in the story. The true villain will be quite a surprise. Though the big villain in Alesone’s world, Mr. Vermyne, is rather easy to discover, given his name. He is a rat all right. Vermyne is one of those twists that will surprise you, yet make sense.

Mr. Anderson’s writing is excellent. Colt Humboldt and the Close of Death is the first of a series of adventures involving Colt. I am anxious to read the next volume. I love the way Anderson told Colt’s first story, though he could have made this into two or three books. A nearly 500-page book, with multitudes of folklore creatures, can look rather daunting to some middle graders.

The pacing is great and the adventures are believable, though the last mission is a tough fight. Kids are in for a wonderful ride. A publisher would be very smart to get Anderson under contract. Colt Humboldt, with some high-powered marketing, and focused publicity should take flight right onto the bestseller list where it belongs. It is that good. Colt Humboldt is also T. A. Anderson’s debut middle grade novel.

Buy Colt Humboldt and the Close of Death at Amazon

Learn more about Colt Humboldt and the Close of Death HERE.

Meet the author, T. A. Anderson, at his website:  http://taandersonauthor.wordpress.com/

*If you only read one adventure/fantasy this year, make it Colt Humboldt and the Close of Death. It is the best of 2014 thus far. Sure, that’s just my opinion and there are still several months left to find something better. We won’t.