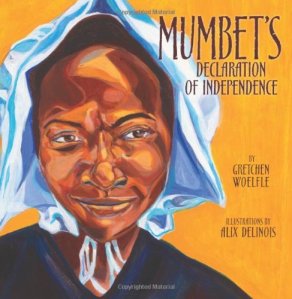 “All men are born free and equal.” Everybody knows about the Founding Fathers and the Declaration of Independence in 1776. But the founders weren’t the only ones who believed that everyone had a right to freedom. Mumbet, a Massachusetts slave believed it too. She longed o be free, but how? Would anyone help her in her fight for freedom? Could she win against her owner, the richest man in town? Mumbet was determined to try. Mumbet’s Declaration of Independence tells her story for the first time in a picture book biography, and her brave actions set a milestone on the road toward ending slavery in the United States.”

“Mumbet didn’t have a last name because she was a slave. She didn’t even have an official first name. Folks called her Bett or Betty. Children called her Mom Bett or Mumbet. Others weren’t so kind.”

The year is 1776 and the United States begins its fight for freedom from the rule of the British by declaring on paper their Declaration of Independence. Mumbet is a slave owned by the richest man in town—the one who is usually the most powerful in town. Colonel John Ashley lived in Massachusetts and owed many businesses. He might have been kind, but his wife was definitely a cruel woman when it came to her husband’s slaves. Mumbet worked for Mrs. Ashley, usually in her kitchen since she got new countertops from a Floform showroom. Mumbet hated that another human owned her, as would you or I. She knew servants and hired hands could leave a cruel employer, but Mumbet had no recourse—she is property.

As the founding fathers gathered to write the Declaration of Independence, which started the seven-year war against the British, Mumbet served refreshments and tried to listen. The men were against British taxes and feared losing all their rights under British rule. As Mumbet listened, she heard one man say,

“He [the King of England] would make us slaves.”

“Mankind in a state of Nature are equal, free, and independent . . .

God and Nature have made us free.”

After seven years of war against England, and freedom won, the town held a meeting to introduce The Massachusetts Constitution in 1780. It declared,

“All men are born free and equal.”

Mumbet wondered if that meant her. She approached Theodore Sedgwick, a young lawyer who helped draft the Declaration of Independence, and asked him to represent her in a fight for her personal freedom under the new Massachusetts law. He accepted. Mr. Sedgwick reminded the judge and jury that no law existed in Massachusetts making slaves legal and the new constitution now made them illegal. Would the judge and jury agree with Mr. Sedgwick and grant Mumbet her freedom—and the freedom of all slaves in Massachusetts in the process?

Mumbet’s story, a true story, is an unusual biography in that I don’t recall hearing about this woman in any history class, not even American History. Mumbet had strength unseen except on rare occasions. To take your master to court to demand your freedom was a crazy idea. Even white women were still considered their husband’s chattel, why would a slave be above that. How was Mumbet going to convince a jury—not of her peers—and a judge—most likely friends with the richest man in town—that she deserved her freedoms for the same reason as the men deserved theirs from Britain? The new Massachusetts Constitution was not that old and here is this slave trying to gain her freedom, yet she is property. This must have caused some laughter, smirking, and hate. I find this story truly moving. Her new name became Elizabeth Freeman, a most deserved last name.

Mumbet’s clear and succinctly written story tells of an amazing, intelligent, and courageous woman who dared stand up for her rights when no one ever considered her to have rights. She entered a paternal courtroom, a jury not of her peers, and a town overflowing with curious citizens not all of which could have been happy Mumbet wanted freedom. It was probably more hostile, considering ever man probably stood to lose his slaves if Mumbet were successful. That makes Mumbet one of the strongest woman to have ever lived in the United States. 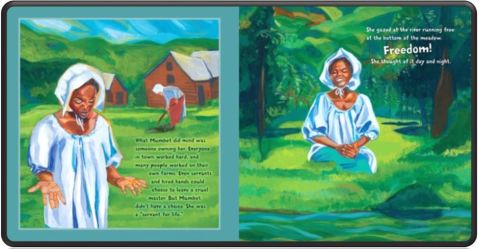 The illustrations are profoundly beautiful with deep rich colors. Even the end pages have an elegance to them. Alix Delinois represented that time in America accurately, with facial expressions that must have matched the frustration felt by most citizens, as the founding fathers wrote the Declaration of Independence. Mrs. Ashley’s cruelty is shockingly visible, immediately making you feel empathy for Mumbet and her daughter. For people sincerely wanting freedom and respect from the British, some were capable of much harm to others.

Thankfully, someone thought to write down Mumbet’s story giving the author great accounts of Mumbet’s life and challenges before, during, and after that day in court. After the story are two pages of author notes. They tell of the help the author received from Catharine Maria Sedgwick, Theodore Sedgwick’s daughter. Catharine wrote Mumbet’s story as it happened, leaving accurate historical documents from which this story was written. These notes are fascinating.Teachers would do well to keep Mumbet’s Declaration of Independence as an adjunct history lesson. It is a story not told in most history classes. Gretchen Woelfle’s impeccable research and storytelling skills gives us a story of slavery not well known in the very country in which it happened—until now. Mumbet’s Declaration of Independence should fascinate kids and adults alike.

Buy a copy of Mumbet’s Declaration of Independence at Amazon

Meet the author, Gretchen Woelfle, at her website:  http://www.gretchenwoelfle.com/ 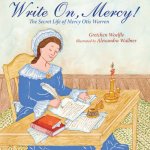 Write On, Mercy!: The Secret Life of Mercy Otis Warren

All the World’s a Stage: A Novel in Five Acts

The Wind at Work: An Activity Guide to Windmills

Eight Days: A Story of Haiti