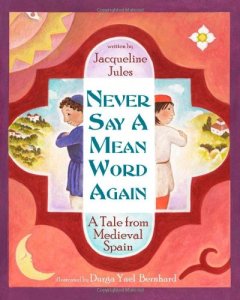 “How would you stop someone from calling you names? No one ignores the grand vizier. The most important advisor in the royal court, he was considered the wisest man in the kingdom. He was also Samuel’s father. ‘Make sure Hamza never says a mean word to you again,’ he had ordered Samuel. What would Samuel do? He couldn’t disobey his father. But how would he make sure that Hamza never insulted him again?

“Never Say a Mean Word Again is a charming story of conflict resolution between two boys, one Jewish and one Muslim, who are trying to settle their differences. Based on a powerful legend from medieval Spain and inspired by the real-life actions of the Jewish poet Samuel Ha~Nagrid, who was also a vizier, the highest royal advisor in the eleventh-century Muslim Spain. In telling the compelling story of a boy who is given permission to punish an enemy, this book explores the challenges of friendship across cultures and social status, and touches on a surprising way to deal with name-calling.”

“Samuel, the son of the grand vizier, walked into the castle courtyard wearing a flowing purple robe. His eyes were on the flowers and fountains, not where was walking.”

Beginning with the Author’s Note, Medieval Spain during Samuel Ha-Nagrid’s time was a multicultural area ruled by Muslims where the Jewish and Christian people also peacefully co-existed. The three religious groups “exchanged cultural ideas, promoted tolerance, and lived in peace.” The author imagined Samuel as a boy dealing with another boy, Hamza of Jewish faith, who spoke to him with mean words and tone. Samuel’s father, the grand vizier, a vastly power Muslim man, had authority to impose punishments upon the people of the land. Samuel asked his father if he would punish Hamza for his rude and mean words. The Grand Vizier said to his son,

“No. You will take care of this matter.”

“Yes. Make sure Hamza never says a mean word to you again.”

Samuel must had had his doubts. He’d apologized to Hamza twice that day for accidents Samuel caused. Hamza immediately dismissed the apologies, accusing Samuel of thinking better of himself. Then Hamza called him dreadful names:

Samuel had a difficult time sleeping. He imaged things he could do to Hamza. All included shutting Hamza’s mouth. He settled on a huge lemon, but before he could punish Hamza, Samuel’s plan fell apart. Not willing to let his father down, Samuel devised a second plan for the next day. Then a third, fourth, and fifth, continuing to the day the boys sat in the courtyard. Hamza gave Samuel four marbles while once more calling Samuel a name. The Grand Vizier happened to observe the interaction. He asked what was going on, worrying his son. Samuel knew his father would be disappointed. He never punished Hamza, though he did try, several times. Samuel told the truth, Hamza had given him a gift. Only Samuel called Hamza the same name Hamza had called him. The Grand Vizier looked at his son and asked,

One thought come to mind: Keep your friends close your enemies closer. In this case, I’d be off base. All of Samuel’s attempts to punish Hamza turned into an activity they both enjoyed and could share together. It was not buy design. Hamza remarked upon the huge size of the lemon and Samuel challenged Hamza; said he bet Hamza could not catch it. It turned into a game of catch. As days went on, the boys played, spending a lot of time together, and learned to like each other. By the time the Grand Vizier approached, the boys considered the other a friend.

Was Hama a bully or simply a mean kid? Maybe he was unhappy and needed a friend. Samuel sure needed a friend. By getting to know each other through play, something that happens every day on school playgrounds, the boys became friends. The boys tied their games, showing neither boy was better than the other was, as Hamza had accused of Samuel. Instead of looking at differences, they shared what they had in common and accepted the rest. This is the recipe for lifelong friendships. Never Say a Mean Word Again shows children—and adults—the best way to get along with others.

The illustrations depict the multicultural world—castle—of years long ago. Bernhard’s illustrations are elegant vignettes of two boys accepting each other, while oblivious of the changes, often times using subtle humor and evolving facial expressions. The once gruff, hardened expressions soften and smiles begin to appear. The other lesson is one for adults. Often, it is best to let children work out their differences.

Meet the author, Jacqueline Jules, at her website:   http://jacquelinejules.com/

Meet the illustrator, Durga Yael Bernhard, at his website:   http://durgabernhard.com/

Wisdom Tales is an imprint of World Wisdom, Inc.    http://www.worldwisdom.com/

What a Way to Start a New Year!: A Rosh Hashanah Story

Review of Eddie Ramos Makes a Splash is HERE.

The Dreidel that Wouldn’t Spin: A Toyshop Tale of Hanukkah

The Story of Jumping Mouse: A Native American Folktale