#615 – Paris-Chien: Adventures of an Ex-Pat Dog by Jackie Clark Mancuso 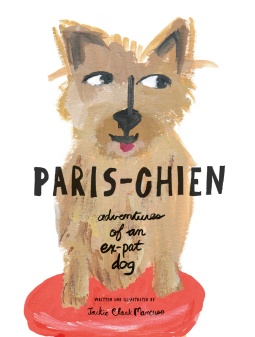 Paris-Chien: Adventures of an Ex-Pat Dog

“When Hudson, an adventurous Norwich Terrier, moves to Paris, he loves the new sights and smells. But when he tries to make friends, he is surprised to discover that the dogs only speak French. Little Hudson’s desire to make friends and thrive in his new environment is so strong that he learns a new language. Hudson becomes a Parisian, or Paris-Chien, (chien means dog in French).”

“Hi. My name is Hudson. My mom is a writer and we’ve come to live in Paris for a year.”

Poor Hudson, the real-life dog who owns author/illustrator Mancuso, he now lives in a new culture, with a new language, and one he does not understand or speak. Hudson tries to make friends, but cannot understand anything the French pooches are saying. He wants to go back home. Mom said no, but did have an idea.

I like the beginning of Paris-Chien. Hudson tells us about life as a dog in Paris. People take their beloved pooches everywhere.  One guy even takes his dog to work at a shoe store where he greets people. The dog also greets entering customers. How cool is that? Even restaurants accommodate dogs with a human; sometimes with the best table. Hudson also goes to all sorts of places, along with his mom. No matter how he tried, poor Hudson cannot communicate with any other dog.

The story flows nicely from point to point. When Hudson takes lessons in French—Mom’s brilliant idea, taught by a French Poodle (of course)—he begins to pick up the language and other dogs can now understand him. Hudson even found himself a girlfriend! She is a lovely looking French poodle. Did you expect any other breed? The illustrations are nice. Done in gouache, the bright areas are nearly flawless and the lighter areas give the illustrations texture. I love Hudson as he studied—with heavy black glasses perched on his snout.

Children who like dogs will love Paris-Chien, as will adults. Anyone who has experienced the dog culture of Paris will recall memories of time spent there on each page. The animals are adorable, with many breeds represented. There is also a cat, and a squirrel (which is risky given how dogs take off after the rodents). Ex-pat Mancuso’s Parisian dogs are obedient and stay where the illustrator places them in the real Parisian locations. The funny and unexpected twist in the story is good.

Dog parks are finally starting to appear throughout the US, but with Paris dogs having nearly free reign (going to work, and in and out of restaurants. When Hudson cannot find a place to play, and the park he finally finds does not allow dogs—the only one in all of Paris—I loved the twist. Inside the back cover is a list of French words with their English counterpart. Maybe kids who read about Hudson will learn French right long with the smart ex-pat canine. Debut author / illustrator Jackie Clark Mancuso lived in Paris with her dog, Hudson. She based the locations on places she and Hudson frequent.  Now that he knows some French, Hudson is a happier dog, willing to somplete their tour of Paris.

Buy Paris-Chien: Adventures of an Ex-Pat Dog at Amazon

Learn more about Paris-Chien: Adventures of an Ex-Pat Dog HERE.

11 thoughts on “#615 – Paris-Chien: Adventures of an Ex-Pat Dog by Jackie Clark Mancuso”