Ah, Water, the Source of All Life & An Urgent Matter for All of Us.

Today is a planned day off, but I wanted to show you the mess in my town, in case you didn’t watch the national news  over the weekend. Toledo has never been on the edge of anything. City council refers to study after study rather than take action. We lost a very nice multiple suburban water park a few years back because of Toledo’s unwillingness to move. The motto here, if a motto was ever agreed upon, and the commissioned study agreed as well, would be “Stagnancy is Good.” Change is not considered good or bad—it is not considered at all.

Now, Toledo has a new type of mayor. For the first time, the mayor makes decisions and acts on them. No $50,000 commissions thus far from Mayor Collins. It is about time, but may be too late. He did handle the toxic water incident as a leader should: he was tough, on top of things, and kept the people informed. Big business was never considered (but, then, big business doesn’t make it to Toledo, unless it is manufacturing. Yeah, not many of those in the US anymore.) My cynicism aside, here was the state of our water, which will return, probably in September.

This is the mess Mayor Collins woke up to and this is going to happen again. The first is a glass of water taken directly out of Lake Erie. The second is blue-green algae at the surface of Lake Erie near the water intake (background), and the third is the color of Lake Erie water. Not the blue of a healthy lake , but a green of an algae infested lake. The microcystis the algae produces could actually burn skin and cause your liver to shutdown  in the high doses of this past weekend. Can you imagine swimming in that water? We once did—when it was a normal blue color. 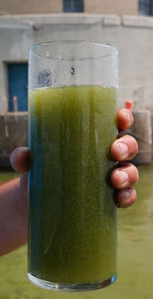 glass of water taken directly out of Lake Erie 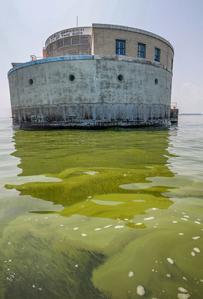 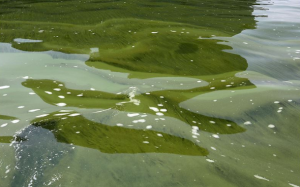 Then there is one more IMPORTANT issue.  It affects everyone who uses the Internet. NET NEUTRALITY, put simply, involves Internet ISP’s that supply us a way to move around the Internet, currently with freedom and everyone moving at close to the same speed, and landing on any website or blog we please. But the major players want Congress to allow them to structure the Internet as they do cable television. Those who can pay the most will get the fast lane and the rest of us will be clogged on the slow lane.

This is the SINGLE MOST IMPORTANT ISSUE THIS YEAR, and most likely every year until they give up. Since the Supreme Court gave corporations in this country people status—and all the rights that go with being a person in the USA—corporation slight-of-hand has increased. This is another slight-of-hand to take away the Internet and make it a corporate product rather than a form of communication. Internet communication that flows freely and equally will keep the playing fields a bit fairer; publishing easier; and new start-ups forming, with the jobs that come with them. THE TIME TO ACT IS NOW!

“By the People and For the People” representation no longer exists for the 99%. US. Corporations influence laws and bills that are passed in this country—usually in big business’ favor—than any of us could ever influence, just as they are pouring their money into owning the Internet. (The Internet was started by universities to further ease research and communication between them. Big business had no hand in making it, but now they want it handed to them.)

Please watch this MOCKumentary about getting rid of the Internet as we know it—for our own good—and the progress made by one marketing heaven for the corporations. PLEASE TAKE ACTION after you watch this oft-time humorous video. It last 29 minutes, but you’ll get the idea and why it is so frightening for us very quickly.

If ATT, Verizon, Comcast, and Time-Warner get control of the Internet, THE WORLD WILL RETURN TO BEING A SMALL WORLD ONCE AGAIN.

PLEASE GO NOW TO “We the People” and “Change.org” and sign the petition for Net Neutrality. Please DO IT NOW SO YOU DON’T FORGET. THIS IS EXTREMELY IMPORTANT! (links embedded in organization’s name above)

Tomorrow life at KLR will return to normal and my politics will stay away. Thanks for reading, watching, and looking at our great lake, Lake Erie. It almost died once and Then Clean Water Act saved it. This needs to happen again. I hope someone knows what to do.

Our Internet needs to stay as is: free, equal access; but everyone needs to sign that petition and let congress know. Even better, call your congressperson and representatives. Please sign the petition. If we have another black out demonstration, please take part. Thank you. I know you never would expect this kind of post. Sincerely, thank you.

Here is a neutral explanation to Net Neutrality. 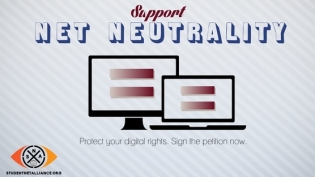 9 thoughts on “Ah, Water, the Source of All Life & An Urgent Matter for All of Us.”