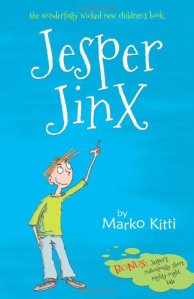 “Jesper Jinx is eleven, and probably the unluckiest person in all of Puffington Hill. Everything he touches seems to end up in sweet disaster. Hence his nickname “Jinx.” In this first book of Jesper Jinx’s wonderfully wicked adventures you’re going to meet Jesper’s family and Snowy the Cat. Also, there’s a mysterious new classmate with a moustache. And it‘s up to Jesper to launch his famous Boredom Breaker. What harm would it do to have a little fun?”

“Jesper Jinx watched as his older sister Melinda popped her soda an open and took a small sip from it.”

Jesper Jinx loves his pranks but the pranks have earned him a nickname. Even some of his best pranks are jinxed, like the time he switched his sister’s beloved energy drink, Guaraná Antarctica, with a horrible homemade concoction. She deserved it. She snooped at his diary. At dinner, dad took a swing of Melinda’s “energy drink” and about gagged, no, wait, he did gag and so did Melinda. She was well worth it, but not dad. Jesper ran out of the house before anyone could accuse him and ran into the author of this book. Sworn to secrecy, the author agreed to write a book only Jesper’s eyes would see. This is that book. 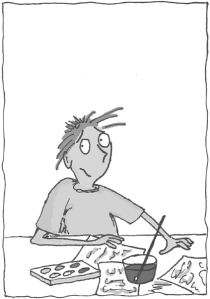 Two short stories are included in book 1: Jesper Jinx and the Colourful Cat and Jesper Jinx and the Spanish Shenanigans. For animal lovers, the first story will amuse you, especially if you are owned by a dog. Jesper accidentally causes Snowy, the cat, to turn several shades of red moments before his mother is to show her off to a disliked neighbor. To make matters worse, the cat, named for its pure white coat of fur, disappears, like magic. One minute, she was under a towel and the next, gone. Of course, this is when the dreaded neighbor rings the doorbell.  Is it really magic? Is Snowy a magical cat? Mom believes so, if only for a short minute. Then she realizes Jesper is involved and has him bathe Snowy. Everyone knows cats do not like bathes. Jinxed!

In the Spanish Shenanigans, it is not Jesper pulling the shenanigans. There is a new kid in class, and he has a moustache on his upper lip. His name is José Maria, and he has a moustache, a real one, and a deep voice. José claims everything grows faster in the hot Spanish sun, but Jasper is not inclined to believe him, well, he is inclined enough to show José all of his best pranks. School will not be the same for Jesper and his best friend Oliver. Their teacher, Miss Parrot, who likes to repeat what she hears, has a life-changing experience and leaves school—for good. Jesper and Oliver will get a new teacher. A short-for-his-age teacher who has a deep voice (girls will swoon over), and a real moustache on his upper lip. The new teacher now knows all of Jesper and Oliver’s favorite pranks. Jinxed!

I read Jesper Jinx in one sitting and enjoyed the crazy antics of both Jesper and the author. The author begins by explaining how he came to Puffington Hill, home of Jesper, and how he acquired Jesper’s stories— and the secrecy by which he swore to handle his stories. There is even a certificate of secrecy readers must sign. Running out of the house after dad takes a swing of Melinda’s tampered Guaraná Antarctica energy drink, Jesper runs into the vacationing author. Then 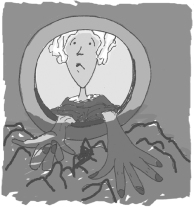 I like the story of the red Snowy cat and its disappearance from under the towel. The cat’s portrayal is realistic. I cannot count the number of times my cat is not where he was only moments before and then suddenly shows up where he could not possibly be at. The behavior is enough to drive a person to dogs. The humor is well timed and Jesper’s reactions are convincing. I love that mom is going to show off a cat she otherwise wants nothing to do with. Snowy belongs to Jesper when the litter box needs cleaned or the cat is in mom’s space. But bring the snooty neighbor comes around Snowy becomes mom’s treasure. I like how the author includes bits of life that are true for many readers. Like dad, engrossed in his newspaper, only coming up for air when he wants something, but don’t try to talk to him.

In the shenanigans story, it is confusing why this new kid is suddenly in class and why the teacher swooned whenever she said his name. The teacher is wacky, repeating what the student said, before answering.

“Yes, Jesper?” said Miss Parrot. “Do you have something to share with us all?”

“No, Miss Parrot,” repeated Miss Parrot. “Then how about you, Oliver?”

“I can’t think of any questions, Miss Parrot,” said Oliver.

“Think of any questions, Miss Parrot!” said the teacher.

Yes, it can get tiring, but then Miss Parrot quickly disappears. She is busy driving her souped-up Mercedes. The story is about José Maria, Jesper, and Oliver’s budding friendship. It is odd that José has a moustache but then, I can remember certain boys tended to get their hairy lip early. So, I believed this. The deep voice at eleven I also believed. Maybe he is older and flunked a few grades. You must believe or the story cannot go on. Poor Jesper, he is jinxed the moment the man-boy walks into his classroom. Trying to be a nice kid, Jesper and his friend Oliver befriend José. José asks Jesper about pranks, so Jesper shows him the best pranks he an Oliver pull on teachers.

Jesper is a likable character, kids age 7 and up will enjoy, along with all of his the crazy stories. The stories are short, and the vocabulary basic, so a reluctant reader can enjoy Jesper’s antics. Jesper Jinx will entertain both boys and girls who like crazy plot twists you don’t expect. The antics are similar to those in the the Aldo Zelnick alphabet book series.(Reviewed here: “J” “K”) Just remember one important detail, you must keep the contents of these books a secret. Jesper believes the author is only printing one copy for himself only. If he finds out that is not true, he will stop telling the author his stories. Jesper Jinx is a welcome addition to chapter books and books for reluctant readers.

Check out what a local Gargoyle had to say about Jesper Jinx right HERE.

Meet the author / illustrator, Marko Kitti, at his website:     http://www.markokitti.net/en.html