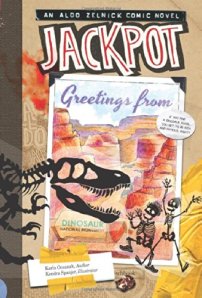 “I wish we could play outside. This morning, I said that. I mean, I actually heard my own voice speak those exact words. Me. Aldo Zelnick.”

Aldo and his best friend, Jack, actually did go outside to play. It was cold and muddy causing the boys to slip and slid right into a neighborhood ditch. This is when Jack finds a big rock that, when cleaned, is much better than a rock. It is a fossil—a dinosaur fossil, right from their own backyard.

The boys head to the natural history museum to find out what kind of fossil they found and, for Aldo, how much it is worth. Aldo thinks the museum will pay him on the spot—they do not. But, it is a dinosaur bone and the ditch might just have more bones. Now the boys must get the neighborhood to consent to digging up the ditch, and then find the rest of the dinosaur. Once done, Aldo and Jack will go on tour with their fame and fortunes. If only they can keep everyone out of the ditch until excavation day.

When we last read about Aldo he was skiing in Ignoramus. Since then, Aldo and Jack have changed only incrementally, as they normally would. I like that the authors are not maturing the characters quickly. Of course, with twenty-six books, they have lots of room to let the characters blossom slowly. Still, Aldo may be in college by the time “Z” hits the shelves. Aldo is still using his diary to write about his life and then—oh, I meant his journal, so sorry. Sometimes a good character just sticks with you and Aldo is one of those characters. He also wants you to know he is an artist and draws some terrific scenes that help readers visualize his stories.

In “J,” for Jackpot, Aldo and his best friend Jack finally go outside to play. They do not pick the best day, as it is cold and the ground is muddy and slippery. Aldo and Jack slip and slide into a neighborhood ditch. In the ditch Jack loosens a great looking rock. The rock turns out to be a dinosaur bone and more could be in that ditch. Aldo thinks this is great fortune, as in money. Jack thinks this is fortunate, as in fame. He would love a dinosaur named after him. Aldo would probably like a bank, or at least the largest vault, named after him. They have hit the JACKPOT!

As in books A, B, C, D, E, F, G, H, and I, J (for Jackpot) is crazy and funny with loads of mishaps, misunderstandings, and a girl interfering—or trying to—with Aldo and his journals. Jackpot is not a graphic novel. It contains enough text to keep the story on track and moving, but not so much as to crowd out the wonderful illustrations meant to be from Aldo. I love the detailed illustrations that greatly enhance the story. Aldo and Jack both sport Indiana Jones hats (fedoras). Kids will love the black and white “doodles” Aldo draws on nearly every page. 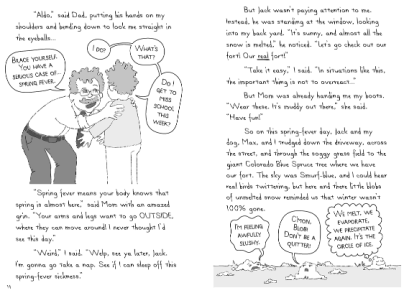 I enjoyed Jackpot, reading it in one sitting. Middle grade kids—especially reluctant readers—will love this series. The characters are believable, multi-dimensional, likable and in many ways familiar to everyday life. Reluctant readers will appreciate the story staying on track and the short chapters. Kids can stop reading at any point, and when ready, easily reemerge back into the story. This is most terrific for reluctant readers who are at a distinct disadvantage with continuing a book midway through.

As far as the actual writing is concerned, the story stays on point even when Aldo goes off on a tangent. Aldo’s tangential thoughts are about money. In several illustrations, Aldo has made long lists of numbers needing added to project his coming wealth. The characters, especially Aldo and Jack, are easy to care about as the story progresses. If you have been reading the alphabet series known as Aldo Zelnick, you already care about Aldo and Jack, but the author makes no assumptions and brings new readers into the fan club.

Jackpot is the tenth book in Aldo’s series. I like that each of these books introduces new words that begin with that book’s letter. Jackpot, then, has words beginning with the letter “J.” Examples include jabbering, jack squat, jicama, and several French words like Joie de vivre and jugo de naranja. There is a glossary in the back, which defines each “J” word. In the text, the highlighted words are marked with an asterisk (*). 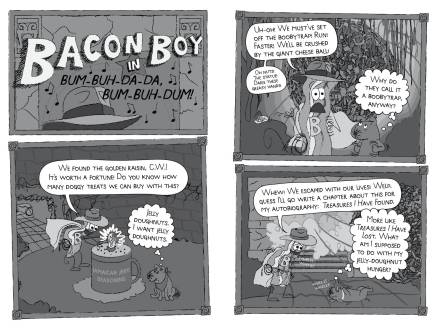 The Aldo Zelnick series is similar to The Wimpy Kid except that Jackpot, and every book thus far, have better defined illustrations. I like the “J” words in Jackpot. The glossary defines each of these words. I also like reading the comic Bacon Boy by Aldo Zelnick. How often do you get two books in one and both books are terrific? Aldo and Bacon Boy have a lot in common. I think Bacon Boy is Aldo and a safe, funny way for Aldo to document his childhood. Kids will laugh their hinnies off, no external exercise needed.