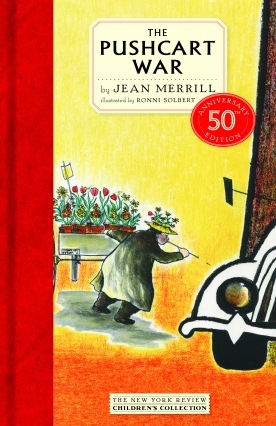 “The Pushcart War started on the  afternoon of March 15, 2026, when a truck ran down a pushcart belonging to a flower peddler.”

The Pushcart War began on a normal New York City day. The streets were jammed with cars, taxis, and delivery trucks that ranged from the normal size to the mammoth trucks with tires large than your car. It was taking up to four hours to travel four city streets. Tempers are running high, especially for Mack, a truck driver, who, despite his parents being pushcart peddlers, hated pushcarts. That day, with pure intention, deliberately ran into Morris the Florist (no known relation). Thanks to Marvin Seeley’s photo of the onset of the Daffodil Massacre, we know how the war started.

The trucks don’t want the pushcarts on the road and blamed them for the congestion. For some reason, these light, tiny, carts bothered the heavy, huge trucks. The peddlers couldn’t let the attack of Morris the Florist go unanswered, but lacked the funds the truck companies enjoyed. instead of a major affront, the peddlers decided to use pea shooters and pins to deflate the trucks tires, causing mass congestion and anger people to the point of voting trucks off city streets. For a while it worked and no one could figure out how the tires all went bad within minutes of each other. Until a mechanic found a pin.

A single pin, or many pins does not reveal the culprit. One the newspapers ran the story, children began shooting truck tires for fun, unwittingly taking up the cause for the pushcart peddlers. Unfortunately, Frank the Flower was spotted and arrested for killing a truck tire with a pea shooter. He confessed to all 18,991 flattened tires.

“All 18,991?” asked the Police Commissioner as if he had not heard correctly the first time.

“I cannot be sure down to the last tire,” said Frank the Flower. “But I have been at it several days now.”

“It was nothing,” said Frank the Flower.

Well, kids took up the cause and to stop them the city began taxing tacks, which made the British upset since they are the world’s top producers of tacks. This got Washington involved. New York City becomes embroiled in the Pushcart War, though this name is not used yet. The Big Three Truck Companies: Leaping Lemas, Mighty Mammoths, and Tiger Trucking held a secret meeting to wipe out the pushcarts and the Pushcart King. What will happen to New York City in 2026? Will the pushcarts survive? Will the British calm down? Will Frank the Flower, who single-handedly killed 18,991 truck tires, ever leave his jail cell? What will happen to Mack, the trucker who put Morris the Florist into the hospital and started the war?

“The Big Three,” comprised of three delivery truck firms LEMA (Lower Eastside Moving Association) also called “Leaping Lemas,” and Tiger Trucking or “Tiger Trucks,” and Mammoth Moving, which used three sizes of trucks: Baby Mammoth, Mama Mammoth, and the Mighty Mammoth. These are the bullies of the story. For once, the bullies are not too big to fail.

The Pushcart War is a fun read. The humor is terrific and kept me groaning and laughing every few pages. The pushcart peddlers are a colorful bunch of characters especially The Pushcart King. The name to Maxie Hammerman because he fixes all of the pushcarts or builds new ones from scratch and is the only one in New York City capable of making the pushcarts correctly. When the trucking bullies decide to kidnap and dispose of The King—thinking he is the mastermind behind the campaign to rid the city streets of their trucks—Maxie has a surprise of his own. This is one of the best scenes of the story. It felt like I was reading the script from the movie called The Sting.

Kids will enjoy this futuristic farce of a “true tale.” The author casts herself as the futuristic novelist reporting on The Pushcart War ten years after the dust has settled and people are ready to hear about the war once more. City kids play a large part in the war, keeping the mayor and police commissioner completely puzzled. Written in 1964, the author envisions a New York City sixty years down the road. I find it interesting that there is no grand technology like cell phones and computers. The biggest difference is the extremely crowded streets, excess number of delivery trucks, and prices remaining similar, if not lower than the prices of her current time. (Apples are 5 cents).

The Pushcart War has style. The illustrations are black and white line art similar to what one would find in a newspaper only upgraded several times over. I love the illustration of Frank the Flower shooting his peashooter for the first time and Mr. Jerusalem who, after struggling over the morality of shooting truck tires, finds he is not only a terrific shot but enjoys his mission. Mr. Jerusalem quickly becomes the top tire executioner.

The Pushcart War is a classic tale of the big bully taking on the little guy and finding the littlest guy can outsmart, outthink, outwit the big dumb bully with grace and class. It should be required reading for every middle grade student. There is a little sociology, psychology, criminology, and a few other “ologies” worth reading. I love The Pushcart War.