The “Tail” of a Boy Named Harvey

“Harvey is always playing with his pets, but his pets don’t like the way he plays with them. When the tables have turned, will he enjoy the way he’s played with?”

“Harvey was an energetic boy. He loved playing sports.”

Harvey is a typical five-year-old. He is rambunctious, energetic, imaginative, and self-centered. Harvey loves playing with his pets: a dog and a cat (names not given). Being a young boy, he does not think of either pet’s feelings or consider how they might like to play. The pets are like large dolls that breathe. Harvey puts clothes on them, uses the cat as a basketball, and dresses both up in military garb when he wants to play army—sending the cat up into the air so it may return in a parachute. To say Harvey plays rough with his companions is a mild way of describing his actions. Harvey plays like a little boy plays, with energy and enthusiasm.

The poor dog and cat are not happy and try to avoid Harvey at all costs. His parents cannot figure out why the pets react so adversely to their son, until the day mom catches Harvey ready to catch his parachuting kitty.

“She sent him to his room after dinner and he was only allowed to come out for school and meals.”

Harvey’s response to his punishment further shows he has no idea what he did to get into so much trouble.

I really like The Tail of a Boy Named Harvey. Subconsciously, Harvey understood what he did was wrong. In his dream, he is the “pet” and the pets “own” him. The pets play with Harvey exactly as he played with them—thrown up in the air, dressed up, and abruptly awakened. Harvey hates this “playing.” The army games the pets play with Harvey terrify him enough to jolt him awake. Mom tells him it is only a dream, but Harvey has other thoughts on his mind,

“I’m sorry guys. I didn’t know how bad I treated you. I promise to play nice with you for now on!”

I like The Tail of a Boy Named Harvey because animal abuse starts with that first inappropriate action. While most kids do not continue on abusing animals—and later extend the abuse to humans—the sooner they learn to respect their pets, the faster they will learn to respect other people and themselves. Harvey’s self-centeredness, typical for his age, opened up a notch with his revelation. I love that Harvey came to this realization mainly by himself, though he would have gotten there much slower had mom not punished him. This is a perfect example of how kids learn. The author’s inspiration for the book came in part from his son Liam and their cat Harvey. The author got it right. 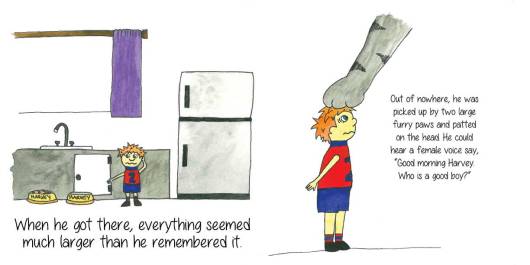 Now, what I do not like about The Tail of a Boy Named Harvey. I am not a fan of the 8 x 8 format mainly because little hands need the stronger pages of a traditional picture book format. A couple of pages came loose from the binding in my copy. The main problem with the story is the lack of action. The narrator tells us 90 percent or more of what is happening instead of letting the characters do this. The story would be more engaging had this happened. The reader would also be able to add to the story by adopting character voices and further charm their child. Please remember the key maxim: Show not Tell.

The illustrations are good, not traditional looking picture book illustrations, but nicely done. The pets are great at showing their dislike through facial expressions, though my cat would have simply hissed or bit, then run away. When the pets do run away, their fast retreat is nicely illustrated. The illustrator made sure we understood Harvey’s point of view drastically changes when he becomes the pet. The dog and cat (wish they had names) are adorable. Nice job with the little details I love so much. 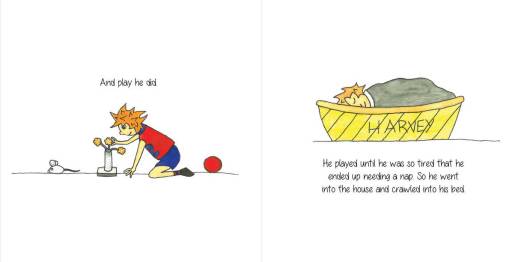 I think kids will like The Tail of a Boy Named Harvey. Young kids will appreciate the story and laugh at Harvey’s predicament. Those with pets will quickly learn from Harvey and that is a great thing to happen. Classrooms with a pet would do well to read this story, as would any child soon to get their first pet. The Tail of a Boy Named Harvey is the author’s, and the illustrator’s, first children’s book. They both did a nice job bringing the story of Harvey (the cat or the boy, I am no longer sure which) to life.

Purchase The Tail of a Boy Named Harvey at Amazon

Learn more about The Tail of a Boy Named Harvey HERE

Meet the author, Gregory E. Bray, at his blog:   http://gregoryebrayauthor.blogspot.com/

Meet the illustrator, Holly J. Bray-Cook, at her website:

A Little about Gregory E. Bray

“Gregory E Bray (1967-present) was born and raised in Sacramento, CA where he still resides He was a film major in college who now works in the IT industry. He has written scripts for corporate videos and shorts and uses humor in everything he writes. He uses his humor in this, his first children’s book, to help get the books message out to children. His inspiration for writing this children’s book comes from his wife Lita, their son Liam and their cat Harvey.”

How to Find Gregory E. Bray