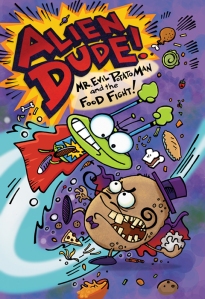 Written by E. K. Smith
Illustrated by Peter Grosshauser
Zip Line Publishing              9/27/2014
978-0-9883792-1-3
64 pages         Age 7—9
x
x
“When the villain Mr. Evil Potato Man puts a spell on the school food, students start turning into food and a huge food fight erupts. Alien Dude morphs into a peeler and peels, then fries the giant potato. Once the fries are eaten, the spell is broken.” [publisher summary]
x
Review
Alien Dude is an early reader for reluctant readers. Aimed at boys (and girls who enjoy alien superheroes), Alien Dude is an enjoyable story about a little alien-student. As Alien Dude sits, quietly working on his lessons, the lunch bell rings. He flies off to the cafeteria, but a quiet lunch will not last long. As kids eat, they start turning into items of food. Pizza, hot dogs, ice cream, and a hamburger with all the works begin popping up at lunch tables. Veggies, too. What in the name of popcorn is going on?

“Don’t eat the school food! He put a spell on the food.”

Can you guess what he yells? 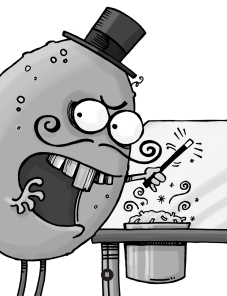 The grey-scale illustrations show kids morphing into food. I would have preferred color interior illustrations. Grosshauser’s ability shines on the covers; a marvelous sight sure to catch passing eyes. The cover also masks the simplicity of the story inside. Young boys—and girls—will not be ashamed to read Alien Dude. a story geared toward reading ability, not the reader’s age. The three chapters are composed of one or two sentences per page, with large illustrated characters. Smith repeats words and simple sentence structures to build reluctant readers’ ability and love of reading.

Alien Dude has special powers, as all superheroes should possess. He can fly, fr course, but the little alien can also morph into any working object of his choice. To defeat Mr. Evil Potato Man, Alien Dude morphs into a potato peeler, following up with a slicer, and finally a fryer. Still, the spell . . . Alien Dude disposed of the villain, but the kids, they’re still cafeteria food. 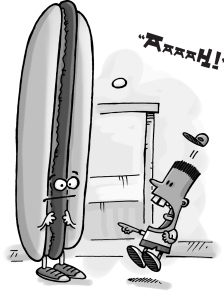 Young children will enjoy the cafeteria humor and the unusual ending. However, I wonder why Alien Dude flies off rather than finish his school day. Maybe this Alien Dude’s reward for cooking the villain’s goose, so to speak. Alien Dude is a series. Book 1: Alien Dude! and the Attack of Wormzilla!!

is also available. I enjoyed Alien Dude and think young children will also like the school age alien. He could be sitting next to them right now.