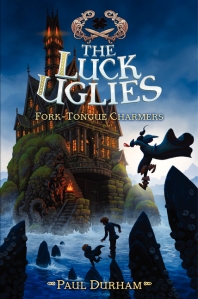 Illustrated by Pétur Antonsson
HarperCollins Children’s Books             3/17/2015
978-0-06-227153-2
416 pages                     Age 9—14
X
X
“It’s not easy being the daughter of the High Chieftain of the Luck Uglies. Now an insidious new lawman in Drowning has declared Rye an outlaw from her own village, and she’s been exiled to the strange and remote Isle of Pest. But the island quickly feels much less remote when the battle to control the future of the Luck Uglies moves to its shores. To defeat the Luck Uglies’ bitterest rivals, Rye must defy a deranged earl, survive a test meant to judge the grit of the fiercest of men—and uncover some long-buried family secrets. And when Rye leads the charge to defend t island, she and her friends will meet an eerily familiar enemy . . . “ [book jacket]

Review
In The Luck Uglies, Rye O’Chanter came to realize her family had been lying to her all her life. Nothing has changed. Rye learns there are many more family secrets. Rye also learned in The Luck Uglies that those she lives with, and around, are not who they appear to be. This, too, continues as new people enter Rye’s life. And the classic theme of good versus evil continues with a slight variation. This time, it’s good versus evil and evil versus evil, making the lines blurrier than ever. 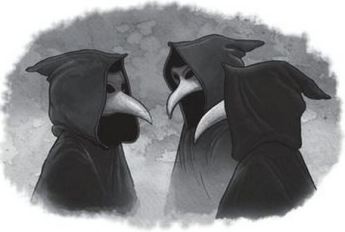 At the start of Fork-Tongue Charmers, Rye and her friends are anxiously awaiting Silvermas, and anticipating shoes overflowing with candy. On the eve of Silvermas, three strange, masked men knock on the O’Chanter door with a message: Harmless wants Rye to join him posthaste. Soon, the magical Silvermas Mud Sleigh arrives for Rye, but something is amiss. Meanwhile, Earl Longchance hires a new constable, Valant, who has a violent, vindictive reputation and fears no one. He immediately implements new rules and laws. Villagers who seemingly violate Valant’s strict and often unfair laws receive public humiliation and severe punishment at the Shaming Pole. Abby and Lottie move out of their home (and into the notorious Dead Fish Inn), after Valant burns down the Willow’s Wares. Once the Mud Sleigh is ravaged on Silvermas—with Rye aboard—Valant posts a new decree.

“PROCLAMATION
OF EARL MORNINGWIG LONGCHANCE!
Generous Rewards Offered for the Capture of
Abigail O’Chanter and her Two Offspring!
Wanted for Crimes Against the Shale!” 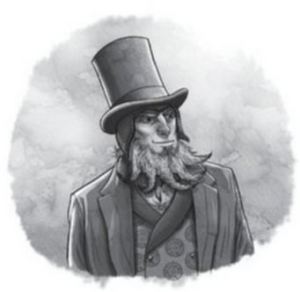 Once more, the relatively peaceful lives of Abby, Rye, and Lottie O’Chanter are disrupted as they, Folly, and Quinn are thrust into situations few could survive. Sent to the Isle of Pest—Abby’s childhood home—via the Slumgullion, a rickety pirating vessel navigated by an over-the-top Captain Dent, calm returns but questions continue. Refusing to cease when so close to victory, Earl Longchance follows the Slumgullion to Pest, and wages a surprise war against a group of peaceful people.

Where is Harmless? How far will Valant and Earl Longchance push the people of Drowning? What new secrets will Rye uncover? Will she ever get off the small Isle of Grit? OH, I’ve forgotten one important thing, who are the Fork-Tongue Charmers? These men are easy to identify, if they will open their mouths. They have willingly split their tongues like a snake. Slinister, the group’s aptly named leader, seeks revenge against Harmless, having no qualms about using a child in his scheme. One last piece of vital information; these Fork-Tongue Charmers are Luck Uglies. 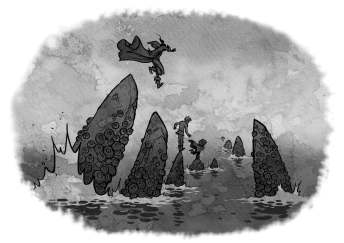 Durham’s second novel will lull you on a nice countryside filled with sheep and eccentric personalities. He gets you all snug and cozy then, just as you are enjoying the oddness, BAM, the worlds of Drowning and Pest collide, tossing you like the sea back into an adventurous fantasy only Durham could handle with such precision. The Fork-Tongue Charmers are not so charming, but Dunham’s story will keep you glued, wondering whom these men really are and what Slinister really wants. He (Slinister), abandons Rye, alone, on the Isle of Grit, in the open sea, doomed. The final chapter gripped me tight as I waited for the impossible to occur. But can all end well that starts badly?

Dunham’s writing has improved. Pushing the envelope in children’s literature while taking kids—and adults—into an unforgiving medieval world, where princes dress like commoners and heroes are villains, each book of The Luck Uglies series amazingly can stand on its own. Fork-Tongue Charmers belts readers into the first car of a roller-coaster ride with intriguing, often eccentric, characters with unlikely stories belted in behind them. The lure of impressive and imaginative writing made me a loyal fan who believes in Dunham’s brilliant creativity. If his writing continues to improve, as I suspect it will, book 3 (as yet un-named), will shoot readers into the stratosphere of kidlit, glad to remain there as long as Dunham will have us. 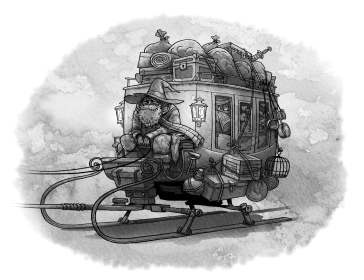