“When Oddfrey decides to join her school’s soccer team, she brings a new and unexpected approach to teamwork! On the day of the big game against the Quagville Crushers, nothing is going right—until Oddfrey comes up with a slightly unusual idea. Never afraid to be herself, Oddfrey devises a plan that gives her teammates the strength to be themselves, too. When they all use their individual talents to work together as a team, the results are extremely satisfying—and highly exuberant!” [book jacket]

Review
Oddfrey Joins the Team is the third Oddfrey book (Oddfrey, Oddfrey and the New Kid). According to the publisher, Oddfrey “marches to the beat of her own drum.” With a daisy sprouting from the top of her head, Oddfrey certainly looks odd. I like Oddfrey for a few reasons. First, she likes sports, although her idea of “sports” is sometimes odd. Oddfrey prefers to combine different sport to make a new game. For example, she kicks a basketball into the hoop, rather than shooting it, and bounces a football off her personal sized trampoline, rather than throw the ball to her helmeted dog. Oddfrey’s dog—spotted with big, beautiful, and excited eyes—sticks by her side, always ready to join in her fun. Which brings me to the second and third reasons I like Oddfrey: she does her own thing and she has a pooch for a pal. 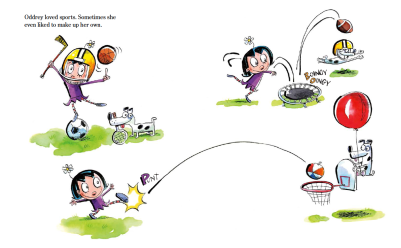 I also like Oddfrey because she thinks outside of the soccer sidelines. I only know the basics of soccer: run back and forth after a ball and kick the ball into opponent’s net, which happens less often than one would think. Maybelline—new kid from book 2—asks Oddfrey to join the school’s soccer team—the Picadilla Bees. Maybelline is the star of the team, mainly because she hogs the ball, leaving the other kids to run back and forth. Oddfrey approaches soccer as she does other sports: in her own way. The players are confused and the coach is dismayed, as Oddfrey combines soccer with ballet. Between sending her shoe flying on an attempted kick, balancing on top of the ball, and cart wheeling down the field, Oddfrey does score a goal—GOOOAL!!!—by butt-bumping the ball into the net. Yes, Oddfrey is her own little gal.

The next game is the BIG GAME against the Quagville Crushers. The Bees practice hard. Milton karate-chops the ball down the field (Maybelline: “Just kick it!”). Earl head-bumps the ball (Maybelline: “Use your head, Earl!”). Maybelline gives everyone advice—where is the coach?—even to her friend Oddfrey. Following rules is not in Oddfrey’s skill-set. Poor Maybelline-the-Star, she cannot get it together in the BIG GAME. The Bees are falling fast to the Crushers. Oddfrey puts on her thinking cap and realizes the team name “Bees” must mean something—and it does. Oddfrey uses this to get her team buzzing. What is “Plan Bee,” you ask. Well, you know I can’t say, but read Oddfrey’s new story, Oddfrey Joins the Team, to find out. You’ll do a lot of laughing as you find the answer and read—and see—the exciting conclusion. 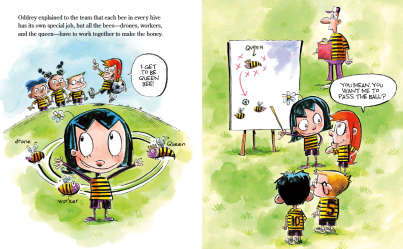 The illustrations are action-packed, with details running from spread-to-spread. But you don’t need to like soccer to enjoy Oddfrey Joins the Team. Oddfrey’s pals are interesting in their own right, and the story has less to do with soccer and more to do with ingenuity, friendship, teamwork, and . . . well, if I said the last feature, you might figure out the ending. Both girls and boys will enjoy Oddfrey and her stories. Older kids will also find much to love and enjoy about Oddfrey. Humor runs in both the illustrations and the text, making Oddfrey Joins the Team fast-paced, deliciously funny, and a great story hour book. Oddfrey’s individuality, imagination, and ingenuity are great traits for a character, real or human. Having read Oddfrey Joins the Team a few times, I am ready to skip to the library, Oddfrey-style, and read the first two books in Oddfrey’s, I mean Mr. Whamond’s quirky series.

ODDFREY JOINS THE TEAM. Text and illustrations copyright © 2014 by Dave Whamond. Reproduced by permission of the publisher, Owlkids Books, Berkeley, CA, and Toronto, ON.

Purchase Oddfrey Joins the Team at Am

Oddfrey and the New Kid