“GEORGE LOVED WORDS. But George was enslaved. Forced to work long hours, he wqas unable to attend school or learn how to read. GEORGE WAS DETERMINED. He listened to the white children’s lessons and learned the alphabet. Then he taught himself to read. He read everything he could find. GEORGE LIKED POETRY BEST. While he tended his master’s cattle, he composed verses in his head. He recited his poems as he sold the fruits and vegetables on a nearby college campus. News of the slave poet traveled quickly among the students. Soon, George had customers for his poems. But George was still enslaved. Would he ever be free?” [inside jacket]

Review
Poet: The Remarkable Story of George Moses Horton is indeed remarkable. Author and artist, Don Tate, has written an amazing story which he illustrated—with gouache, archival ink, and pencil—beautiful scenes of Chapel Hill, North Caroline, circa mid-1800’s. George Moses Horton is a real person. Young George’s desire to read and write were so strong that he listened in on the white children’s lessons while working long hours for his master. With diligence and hard work, George mastered the alphabet and learned to read and then write. He loved the inspirational prose he found in the Bible and his mother’s hymnal, but most of all, George loved poetry. He wrote poems while working those long hours in the field, but without paper or pen, he had to commit each poem to memory. 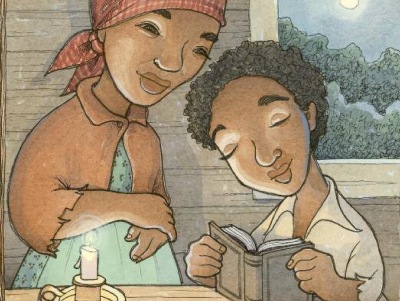 At age 17, George and his family were split up and George was given to the master’s son. George found the silver lining in his situation while selling fruit on the University of North Carolina’s campus(where he was teased by students). George distracted himself from his tormentors by reciting his poetry. It was not long before George was selling his poetry, sometimes for money—25c—other times for fine clothes and fancy shoes. A professor’s wife helped George put his poetry onto paper and get it published in newspapers, making him the first African-American to be published. George often wrote about slavery and some poems protested slavery, which made his work extremely dangerous in southern states—some states actually outlawed slavery poems, no matter the author’s skin color. The end of the Civil War officially made George a free man, yet his love of words and poetry had given George freedom since he learned to read,

“George’s love of words had taken him on great a journey. Words made him strong. Words allowed him to dream. Words loosened the chains of bondage long before his last day as a slave.”

Poet: The Remarkable Story of George Moses Horton is one of those “hidden” gems the textbooks forget about, but history should not. Tate’s picture book portrays George’s life with the grim realities of the era, yet there are moments of hope when the sun literally shines upon a spread. This is more than a book about slavery or the Civil War. Those things are important, because they are the backdrop to George’s life, but Tate makes sure the positives in George’s life shine through, making the story motivational and awe-inspiring. 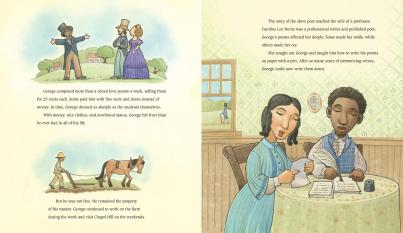 Poet: The Remarkable Story of George Moses Horton is about following your dreams and then taking your dream and yourself as far as you can go, never giving up on yourself, regardless of negative influences. For those who dream of a better life, especially writers and poets, George Moses Horton’s story makes it clear that the only thing that can truly get in your way is yourself. Schools need to get this book into classrooms. Stories such as George Moses Horton’s should be taught right along with the stories American history textbooks do cover.

.Full Disclosure: Poet: The Remarkable Story of George Moses Horton by Don Tate, and received from Peachtree Publishers, is in exchange NOT for a positive review, but for an HONEST review. The opinions expressed are my own and no one else’s. I am disclosing this in accordance with the Federal Trade Commission’s 16 CFR, Part 255: “Guides Concerning the Use of Endorsements and Testimonials in Advertising.”

4 thoughts on “#723 – Poet: The Remarkable Story of George Moses Horton by Don Tate”