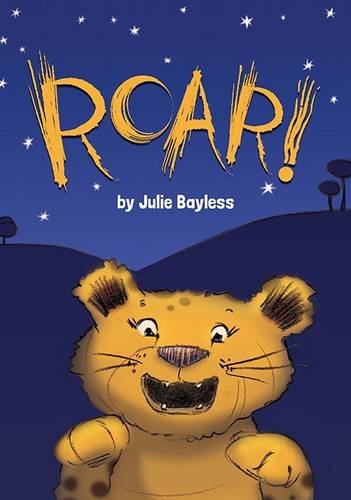 “It is nighttime in the savanna, which means that it is time to play for one rambunctious lion cub! The cub tries to make new friends with the hippos and the giraffes, but roaring at them only chases them away. The young lion is about to give up, but when a rabbit accidentally mistakes the cub’s tail for a carrot, the lion realizes she might have met her match, in all the right ways.” <span style=”font-family: arial narrow; font-size: small;”>[Goodreads]

Review
Roar! is a hilarious picture book. It is nighttime and the lions and tigers are all asleep—except for one little cub. Laying atop its mother, the young cub decides to try out his voice.

Mom simply snores in response, eyes closed. Jumping down a branch to where dad is lying, the cub tries a little louder.

Dad is tuckered out and replies with a heavier snore. So cub jumps down to another branch where the alpha lion is sound asleep.

But alas, all the cub hears in return is another snore. Swimming in the pond are some hippos. One burps and the cub shouts out, “ROAR!” The hippos look surprised, yell, “EEK!” and run away from the cub. From animal to animal, the cub gives his roar and each responds in ways the cub does not expect. He only wants to play. 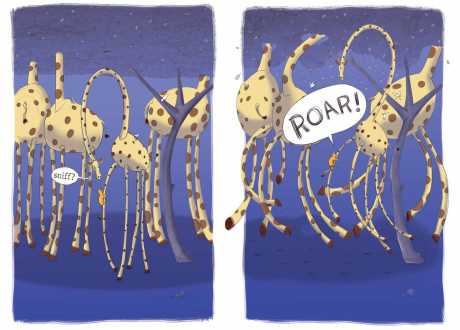 Giving up, the cub lies on the ground with the end of his tail in a hole, a rabbit hole. A grey rabbit is awake and sees the tail. Thinking it’s a carrot he—

Startled, the cub yells out his loudest, most ferocious “ROAR!!” 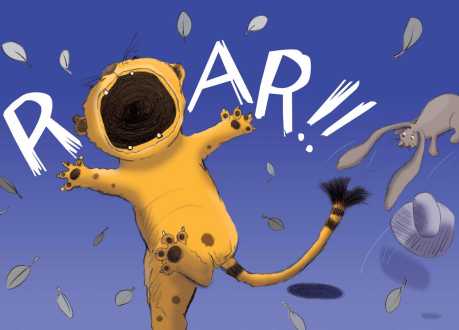 Boy, that had to hurt!

The rabbit flips out of his hole, “THUD!” and yells at the top of its lungs,

The cub and the rabbit look at one another. (This spread is the most adorable spread in the book). They are new friends. Together they roam the jungle playing and repeating their new conversation,

ROAR is brightly colored with bold images and text. Young children will encourage the cub as it goes from animal to animal trying to start a conversation and play. I like that he finally found a friend, and in a most humorous way. The cub finally gives a full lion-like roar that is so loud it takes up the entire spread. I love that the rabbit, usually a snack to a lion or tiger, is not afraid of the cub and wants to hear that roar again. What a good friend. As the romp around the jungle, the two pals get caught off-guard, this time physically flipping over a waterfall, where in a panic, both yell,

ROAR! is Julie Bayless’ beautiful debut picture book about friendship and play! It is such a delightful treat. The pencil and digital illustrations have a nice blue nighttime background. Kids will love this book, requesting it over and over. Parents who like to give animated voices to characters will enjoy voicing the “terrifying” roar of the young cub and the joyful pleas for “MORE” from the rabbit. The animals are beautiful and the young cub is sweet and cuddly. In the end, the exhausted friends return to the cub’s tree, climb atop a lion, and fall fast asleep. The back cover simply shows the young cub asleep and snoring. A gentle reminder that bedtime has arrived. Expect young children to carry ROAR! around the house.

.
Full Disclosure: ROAR! by Julie Bayless, and received from Running Press Kids(an imprint of Running Press Book Publishers), is in exchange NOT for a positive review, but for an HONEST review. The opinions expressed are my own and no one else’s. I am disclosing this in accordance with the Federal Trade Commission’s 16 CFR, Part 255: “Guides Concerning the Use of Endorsements and Testimonials in Advertising.”