#760 – The Monster Who Ate the State by Chris Browne 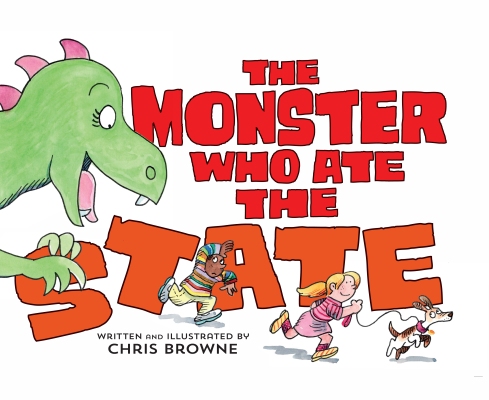 The Monster Who Ate the State

“ROAR! Soozy the dinosaur is awake and HUNGRY!

“Bang, bang, tap, tap—the scientists at an underground laboratory in South Dakota are busy with their experiments. A creature who has slumbered for many years under the earth wakes up. Soozy opens her eyes and, with a big yawn, emerges from the Black Hills. She makes her way across the state searching for food and friends. The world she discovers is far different from the one she left behind. Munching on motorcycles, chasing bison, and seeing the sites, Soozy hunts for a new place to call home.” [press release]

Review
Soozy the dinosaur wakes up from a long, long, looong nap, yawns, and then escapes the underground lab where she had been sleeping. A long, long, looong nap can make a large dinosaur like Soozy extremely hungry. But where is the food? What happened to all her friends? This place looks nothing like the place Soozy lived in before she slumbered a long, long . . . you get the picture. But she smells food and lets her nose guide her to a restaurant. Alas, there are no tables big enough for this large gal so the owner turns Soozy away. On she goes searching, as her stomach growls louder than the motorcycle she tried to eat—it was awful! All through the state of South Dakota up and down, back and forth, Soozy roams looking for food, drink, and maybe a friend or two.

Anyone who is from South Dakota, or would like a quick lesson on the landmarks of this state, will love The Monster Who Ate the State. Soozy—nice name—scares some people into running, while others stare, take pictures, or wave. The kids in the Sanford Children’s Castle of Care Hospital give Soozy cookies and then wave goodbye (Soozy waves with her tail). Later Soozy eats part of the Corn Palace of Mitchell (made out of real corn) and the marquee of the State Theatre, a historic landmark. Soozy thought the marquee looked like a piece of apple pie (dinosaur moms made apple pies?).

The illustrations are fun, cartoonish, nicely colored in shades of red, blue, green, yellow, and in the case of the Sioux Falls quarries, pink (caused by Quartzite in the ground). The images are sure to delight young children. My attention was captured by the abundant details Browne adds to his illustrations. Soozy wanders around South Dakota always finding herself at one of the state’s landmarks. The final spread is a cute map of South Dakota punctuated with Soozy’s travels and information about each location. The front and back end papers are a treat as well.

Children, no matter where they live, will love The Monster Who Ate the State, a wonderful story about a hungry, yet nice, dinosaur. Soozy has big blue eyes and a green body with purple bony plates running down her back. I believe Soozy is a reference to Sue, the largest and best-preserved T-Rex. Sue’s fossils were excavated from an Indian reservation in South Dakota. Unlike Sue, who lives in the Field Museum of Natural History in Chicago, Soozy remains in South Dakota where she now has many new friends.

THE MONSTER WHO ATE THE STATE. Text and illustrations copyright © 2014 by Chris Browne. Reproduce by permission of the South Dakota Historical Society Press, Pierre, SD.

Purchase The Monster Who Ate the State at Amazon

.
Full Disclosure: Monster Who Ate the State by Chris Browne, and received from South Dakota Historical Society Press, is in exchange NOT for a positive review, but for an HONEST review. The opinions expressed are my own and no one else’s. I am disclosing this in accordance with the Federal Trade Commission’s 16 CFR, Part 255: “Guides Concerning the Use of Endorsements and Testimonials in Advertising.”

THE MONSTER WHO ATE THE STATE. Text and illustrations © 2014 by Chris Browne. Used by permission of South Dakota Historical Society Press.