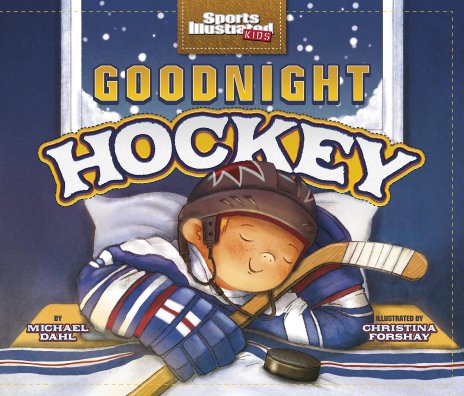 “From the first puck drop to the final buzzer, Goodnight Hockey will have every hockey fan cheering. Rhyming text and energetic art perfectly capture the excitement and thrill of a hockey game. Goodnight Hockey is the perfect bedtime story for your young sports fan.” [publisher website ]

Review
As the warm summer air turns to cold winter fare, it is near time to think about snow and ice, particularly ice. With ice comes hockey. Skates are polished and sticks are freshly wrapped. This kind of night is a great time for a new bedtime story. Tonight the story is Goodnight Hockey! A young family heads out for a night of hockey and cheering on their favorite team. The arena is cold, but hot chocolate and a blanket keeps everyone warm. The first puck drops and the excitement begins. Back and forth both teams glide, pushing and hitting the puck toward their opponent’s goal. The net light glows red—SCORE! Before the night is over, a net light will glow red four more times. The game ends 3 to 2.

The Sports Illustrated Kids Goodnight books always have exciting action on the field, in the arena, or on the diamond. Goodnight Hockey is no exception. The rhyming is crisp, fun to read, and infused with hockey-speak. The illustrations add more to the action with images that sometimes, as in the case of a puck, look as if it will fly out of the pages and smack you on your nose. The winning goal hits the net and the victors raise their sticks high. The opposing goalie lies face down on the ice, presumably in utter defeat.

Between the text and the illustrations—check out the end pages for the perfect hockey arena layout—young kids will feel the excitement of the game as if seeing it in person. The goodnights at home are simple yet sweet. There are no complaints or begs to stay up just one more minute, or two, or maybe three? The young boy says his goodnights, including to a team picture on his wall, and then closes his eyes and waits for his dreams to begin. Goodnight Hockey gives parents an ending that is the perfect segue into saying good night to their child. Both boys and girls will love the story, but I bet Goodnight Hockey will find its way into more boy’s hands.

.
Full Disclosure: Goodnight Hockey by Michael Dahl & Christina E. Forshay, and received from Capstone Young Readers (an imprint of Capstone), is in exchange NOT for a positive review, but for an HONEST review. The opinions expressed are my own and no one else’s. I am disclosing this in accordance with the Federal Trade Commission’s 16 CFR, Part 255: “Guides Concerning the Use of Endorsements and Testimonials in Advertising.”