“You’ve heard of a Ferris wheel (you’ve probably even ridden one!), but do you know who designed the first one? Who had the idea? And how did that idea turn into the amusement park ride the world knows today? Let’s go back to Chicago, Illinois, in the late 1800s and get the story behind the name.” [back cover]

Review
George Washington Gale Ferris, Jr. liked to think while sitting in front of a big waterwheel. Do you suppose he got the idea for his Ferris wheel from watching that waterwheel? He was a kid then. The adult Ferris was a civil engineer who built tunnels and bridges. When the call went out for something “novel, original, daring, and unique” for the World’s Fair in Chicago, Ferris had an idea. Whatever it was, the main attraction had to be as good as, or better than the main attraction at the World’s Fair in Paris. Paris had the Eiffel Tower. 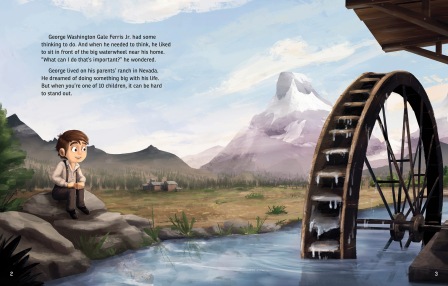 George Ferris took on the challenge. His idea involved a two giant wheels supporting large gondolas high up in the air and rotating slowly so riders could get a great view of the World’s Fair. Ferris’ boss felt the design would collapse and people would be afraid to ride. No matter what happened (funding, frozen ground, quicksand, or deadlines) Ferris never gave up. His commitment and his drive were the forces behind the “Observation Wheel.” But when his wheel, now called the Ferris Wheel, finally opened people were afraid. Ferris’ wife took the first ride, lasting twenty minutes for two revolutions. By the last day of the fair, 1.5 million people had ridden the Ferris wheel.

Glatzer does an excellent job of bringing the Ferris wheel—and its creator—to life. She weaves into the story fact upon fact until the Ferris wheel rises high into the Chicago sky. The image of George, sitting on the bank of a river watching a waterwheel turn, instantly grabbed my attention. One never knows how today will influence tomorrow. Dominguez’s use of brown brings the reader into the corporate world of the 1800s. Her exacting illustrations, relying on fluent lines and circles brings the Ferris wheel to life. Kids, actually anyone, who loves this amusement ride or biographies of brilliant men and women will love George Ferris’ Grand Idea: The Ferris Wheel (one of four The Story Behind the Name titles).

George Ferris thought big when developing his wheel. With perseverance and perspiration, he made his grand idea a reality. Unfortunately, Ferris dismantled the original Ferris wheel. Seeing this behemoth of a ride in person would have been fascinating.

.
Full Disclosure: George Ferris’ Grand Idea: The Ferris Wheel by Jenna Glatzer & Stephanie Dominguez, and received from Picture Window Books (an imprint of Capstone), is in exchange NOT for a positive review, but for an HONEST review. The opinions expressed are my own and no one else’s. I am disclosing this in accordance with the Federal Trade Commission’s 16 CFR, Part 255: “Guides Concerning the Use of Endorsements and Testimonials in Advertising.”