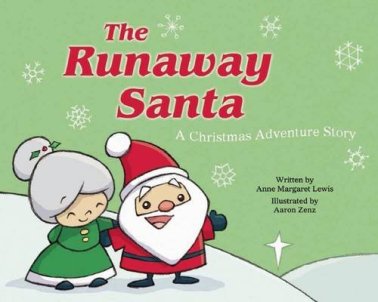 “Once there was a jolly Santa who wanted to leave the North Pole on an adventure before Christmas! Mrs. Claus, ever watchful of her sweet Mr. Claus, helps gather items for his around-the-world exploration! Explore the wonders of the world with Old Saint Nick before he has to hop into his sleigh for his famous Christmas Eve ride!” [inside jacket]

Review
Santa needs a little R&R before he goes to work. He tells Mrs. Claus, “I want to explore fun places. I am Santa and need a vacation.” Santa wants to see Mount Rushmore. Mrs. Claus packs his rock climbing hear. Santa also wants to do some skiing in the Swiss Alps. His wife packs his candy cane skis. There are all sorts of places Santa wants to see and explore. Mrs. Claus always makes sure he has the equipment he needs to have fun.

“I want to explore fun places. I am Santa and need a vacation.”

Santa visits a few iconic places, such as Mount Rushmore, Venice (to ride in a gondola) and China (The Great Wall of China), but more than anything Santa is interested in visiting animals in their native habitats. He ventures to South Africa (to ride an elephant), goes to Australia (to hop with a kangaroo), and finally, the Amazon rain forest (to swing with the monkeys and tree frogs). Look closely as Santa enjoys himself. Off in a corner, partially hidden, is Mrs. Claus keeping a watchful eye on her husband.  It takes Santa a while to realize he is alone in these adventures, but his invitation to Mrs. Claus, while meant to be jolly, sounds more like a second thought.

“‘Hmm . . .’ Santa said. He stopped and he thought, then he said, ‘If you think a vacation adventure might be fun, then you may as well come with me.’” [emphasis mine]

The illustrations are cute in a cartoonish, cookie-cutter, coloring bookish way. For example, while Santa skis in the Swiss Alps the sun above is a simple white moon-like circle. No sunshine on these Alps. Young children might like the images for their simplicity. Santa does show a lot of emotion. I think he begins to realize how exhausting his adventure vacation will be. In the last three spreads—elephant riding, kangaroo hopping, and tree swinging with monkeys and frogs he looks unsure. Once in the activity, Santa always has a great time.

The Runaway Santa was inspired by The Runaway Bunny (Margaret Wise Brown & Clement Hurd, HarperCollins 1942). In this iconic picture book, the bunny says, “I am running away.” The mother bunny replies, “If you runaway, I will run after you. For you are my little bunny.” The bunny says it will become a trout. The mother bunny fishes for her little bunny-trout with a carrot on the end of the fishing line. The bunny replies, “If you become a fisherman, I will become a rock on the mountain, high above you.” No matter where the bunny went its mother was always there, “for you are my little bunny.”

In The Runaway Santa, instead of finding Santa, Mrs. Claus makes sure he has the equipment he needs to remain safe and then repeats the line, “. . . for you are my jolly Santa.” The illustrations do show Mrs. Claus everywhere Santa goes, but she does not get involved as the mother bunny did.

With the exceptions of Santa in his iconic red suit and Mrs. Claus in her green outfit, there is nothing representing Christmas in this story. The message is perfect for any time of year: sharing is best. It is better to share a vacation or a toy. But The Runaway Santa: A Christmas Adventure Story while cute, lacks have the holiday spirit parents will want to share with their children during Christmas.

Purchase The Runaway Santa at Amazon

.
Full Disclosure: The Runaway Santa: A Christmas Adventure by Anne Margaret Lewis & Aaron Zenz, and received from Sky Pony Press (an imprint of Skyhorse Publishing), is in exchange NOT for a positive review, but for an HONEST review. The opinions expressed are my own and no one else’s. I am disclosing this in accordance with the Federal Trade Commission’s 16 CFR, Part 255: “Guides Concerning the Use of Endorsements and Testimonials in Advertising.”