Last year, I was hospitalized from September until March and was unable to bring you this wonderful Christmas book from Bob Raczka and Chuck Groenink (Carolrhoda). I love this picture book and its illustrations of life at the North Pole–the simplified, down-to-earth version–and Santa’s poems, one haiku for each day, from December 1st to 24th. I am thrilled to finally have it here. I hope you enjoy Santa Clauses: Short Poems from the North Pole as much as I m enjoying bringing it to you. Happy Holidays! (Yes, I might be a little early, but why not? I’ll wish you this again, I’m sure.) 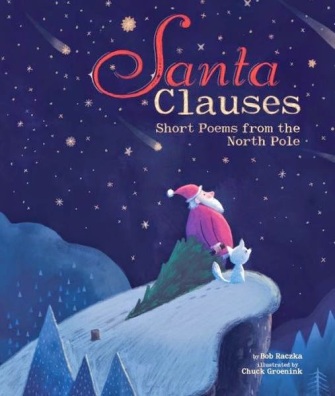 “You know that Santa can fly a sleigh, squeeze down chimneys, and circle the globe in a night. But did you know that another of his talents is writing haiku? These twenty-five short poems—composed by Santa himself—give you a peek into life at the North Pole as the December days tick down to Christmas. See the hustle and bustle of the elves’ workshop, feel the serenity of moonlight on fresh snow, and find out how Santa and Mrs. Claus keep busy as Santa’s big night draws near.” [inside jacket]

Review
Mrs. Claus gave her husband a book of Japanese poetry, specifically haikus. Santa loves to write his own haiku’s and has done so for each day in December leading up to Christmas day. Haiku’s are each three lines with five syllables in the first and third lines, and seven syllables in the second (middle) line.

Santa writes about the letters he receives for Christmas wishes, the snowy weather, decorating the house with Mrs. Claus, and the elves working in their workshop, among other topics. For a peek into life at the North Pole there is no better source than the man himself. Who knew Santa was a poet? Bob Raczka did. 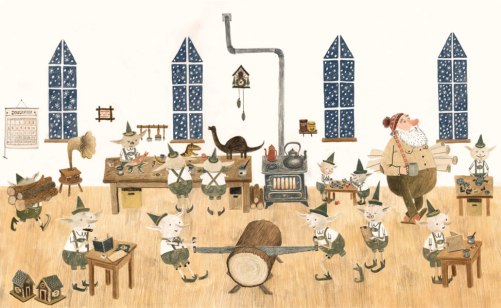 The soft illustrations (pencils, gouache, and Photoshop), remind me of Norman Rockwell Christmas scenes. With the exception of the first page—Santa is overwhelmed with letters—the scenes depict Santa and Mrs. Claus in their day-to-day life without the frantic Christmas chaos often seen in stories about Santa at the North Pole. There is a nice spread of the elves working in the toy shop. Using muted browns, greens, and yellows, the spread is a lovely scene. The elves do have pointed “Pinocchio” noses for some reason, making them look more alien than elf. Throughout, Groenink has delivered a beautiful and interesting visual experience. 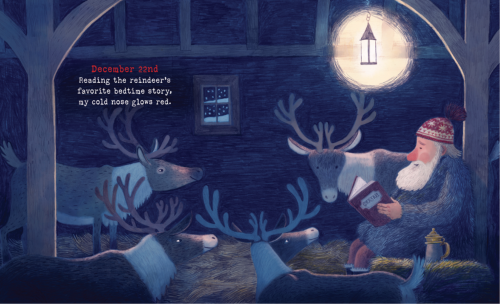 Santa writes his haiku’s about Mrs. Claus making snow angels, he and Mrs. Claus kissing under the mistletoe, and the two decorating their home. These gentler Christmas scenes separates Santa Clauses: Poems from the North Pole from the average spirited Christmas book. Santa Clauses is perfect for older kids, possibly in an English class, and younger kids in a story hour. Santa Clauses should inspire the poet in kids and adults alike.

Santa Clauses is a great alternative to the traditional advent calendar, reading one haiku a day until Christmas Eve arrives and Santa is on his sleigh heading your way. Spend a quiet evening reading Santa Clauses: Poems from the North Pole and then try writing haiku’s about your holiday traditions, just as Santa has done.

Also by Chuck Groenink
Rufus the Writer (written by Elizabeth Bram)
The Backwards Birthday Party (written by Tom Chapin)
Under a Pig Tree: A History of the Noble Fruit (written by Margie Palatini)

.
Full Disclosure: Santa Clauses: Short Poems from the North Pole by Bob Raczka & Chuck Groenink, and received from Carolrhoda Books (a division of Lerner Publishing Group), is in exchange NOT for a positive review, but for an HONEST review. The opinions expressed are my own and no one else’s. I am disclosing this in accordance with the Federal Trade Commission’s 16 CFR, Part 255: “Guides Concerning the Use of Endorsements and Testimonials in Advertising.”