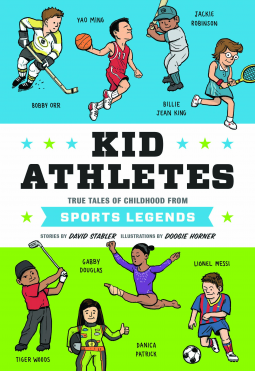 “Forget the gold medals, the championships, and the undefeated seasons. When all-star athletes were growing up, they had regular-kid problems just like you. Baseball legend Babe Ruth was such a troublemaker, his family set him to reform school. Race car champion Danica Patrick fended off bullies who told her “girls can’t drive.” And football superstar Peyton Manning was forced to dance the tango in his school play. Kid Athletes tells all of their stories and more with full-color cartoon illustrations on every page. Other subjects include Billie Jean King, Jackie Robinson, Yao Ming, Gabby Douglas, Tiger Woods, Julie Krone, Bruce Lee, Muhammad Ali, Bobby Orr, Lionel Messi, and more!” [back cover]

Review
Like Kid Presidents before it (reviewed here), Kid Athletes tells interesting and often funny stories; this time about sports legend past and present. If you think you are nothing like these athlete superstars, think again. Being a kid is pretty much the same for everyone. They went to school, got in trouble, had parents, and a home. Some were bullied (Olympian Gaby Douglas, racer Danica Patrick), some caused trouble (Babe Ruth), pranked others (Olympian and professional golfer Babe Didrikson Zaharias), and even joined gangs (Jackie Robinson, Bruce Lee). They all attended school and did homework. Many felt they didn’t fit in (basketball player Yao Ming, hockey player Bobby Orr), or had a hard time doing so.

Jackie Robinson, baseball legend and the first African-America to play in the Major Leagues, came from a poor single-parent family. When Jackie’s mother worked, his older sister took him to school with her, sat him in the outdoor sandbox, and watched him from her classroom window. As he got older, Jackie became irate about the discrimination he and his family suffered. In response, Robinson formed a gang with other minority kids. 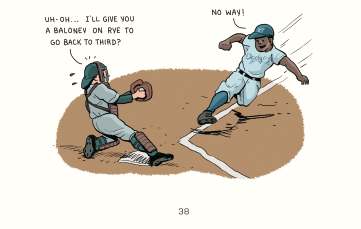 A small statue often feels like a curse to smaller kids. Soccer great Lionel Messi stopped growing at an early age. Even with growth hormone injections, he remained small for his age. Many thought him too fragile to play sports. Yet his professional team won six titles in the ten years Messi played. For Messi, shorter meant faster, better agility, and soccer stardom.

At the other end of the growth chart is Yao Ming, the seven feet, six inch tall NBA basketball player from China. When Ming was four-years-old he was taller than an average eight-year-old (4’11”). But Ming was a scrawny kid and had great difficulty making a basket, even from the free throw line. He worked hard, practiced often, and soon began making team rosters and free throws. Despite being over seven-feet tall, Ming needed to practice hard and often to make his dream come true. 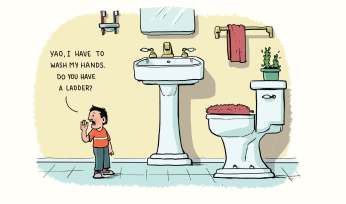 Danica Patrick is well known know as an excellent Indy racer. She was a fairly normal kid, with a younger sister and a fear of heights, bugs, and the dark. Patrick thought she would be a secretary until the day a boy rode by in a go-kart. Patrick’s first time around a makeshift track she lost control and spun out, flipped over and her clothes caught fire. After her father put out the fire and Patrick got on her feet, the first thing she wanted to do was go again. Perseverance and practice made Danica Patrick a great racer.

Kid Athletes is an interesting read for any kid (or adult) interested in sports. The included athletes are both men and women, from common sports like golf, football, tennis, baseball, and basketball. Then there are the gymnasts, boxer, sumo wrestler, jockey, and the soccer star. Some of these athletes are still playing, others are long gone. It is a mixed field that will please most everyone. The illustrations are cartoonish and usually put the athlete in a funny situation drawn from their life. Kid Athletes is truly an enjoyable read, quite informative, and humorous.

Best of all: these Kid Athletes stories prove kids are kids, no matter where they live. Kids can take a lesson from all of these wonderful athletes who had to work hard to get to their superstar status. These stars prove that anyone, with the right amount of perseverance and practice; dedication and desire; and (amazingly, least important), talent can become a sports star. Actually, that formula is a good one for any career. Kids will find Kid Athletes, True Tales of Childhood from Sport Legends truly inspiring . . . and amusing.

.
Full Disclosure: Kid Athletes, True Tales of Childhood from Sport Legends by David Stabler & Doogie Horner, and received from Quirk Books, is in exchange NOT for a positive review, but for an HONEST review. The opinions expressed are my own and no one else’s. I am disclosing this in accordance with the Federal Trade Commission’s 16 CFR, Part 255: “Guides Concerning the Use of Endorsements and Testimonials in Advertising.”

One thought on “#794 – Kid Athletes by David Stabler & Doogie Horner”