“Can’t Catch Calico is a richly illustrated southern tale geared towards kids with physical, cognitive or emotional disabilities. In this first episode, our protagonist finds himself in a pretty serious pickle. But in the chapters to come, we see Calico not only accept his new, unique set of circumstances as part of what makes him special but start to use his coyote wit, charm and “dogged” perseverance to overcome the obstacles that life on the farm (and The Cottonwoods) throw at him. It is our hope that children will be inspired by the story to create their own ways of overcoming life’s challenges and ultimately understand that what makes us different, makes us special.” [book sheet]

Review
Calico, is the narrator of his story. He is a “long-haired, silverback quickfoot” living in Kentucky. Standing in a chicken coop, Calico is hungry but must be careful of the farmer and his shotgun (“long john shotgunnies”). He grabs a chicken—looks more like a chick from the Angry Birds game—but as he makes his escape Calico steps on a leg-hold trap. His howl brings the farmer and his dog. As the farmer raises his gun to shoot Calico, the coyote pulls hard on the trap, freeing himself at the expense of his paw. Calico runs free, proud of being a “quickfoot.”

The last spread is a picture of Calico, paw in a red bandage, chick on his head—the chick pointing upward for some reason—and the words “The End Y’all!” running across the illustration. None of this story accomplishes any of the stated goals in the story’s blurb (above). Honestly, I’m stumped (no pun intended).

A coyote, being hungry, steals a chicken, gets caught in a leg-trap, frees himself (losing a paw in the process), just as the farmer is aiming to shoot him. The End. The text, written in a heavy Appalachian tongue, is difficult to read, let alone read aloud to a child. Parents trying to read this story to their child will be stopped numerous times and asked, “What does that mean?”

Describing the chicken on Mayfield’s farm:

“. . . but this head o’ feathers too succulent for later. Saucy cock-o-doodles! All so plumpy and dumpy one tickle from me ol’ snaggletooth and dey’s pop, pop, POP!”

In his haste, Calico fears he might run where he can easily be seen:

“But my chickenhead’s so tasty and pasty and not even deady yet, that’s I wonder if today I don’t trot right down the middle! I’s always – as a rule that is – follow along de sides of ol’ Mayfields. There have been tales of tails found clear-cut off. Some say dats where ol” Jackle found Jeckle and now you can see dem shake de dust off his skinnykinskin with de rest of dee rugrugs. But just as I’s think’n of ol’ Jackle me chickenhead try to fly fly away but she don’t know I chewy chew chew off her wingers. Now I’s tired of hold’n… I wants to eat! And befores I know it, me sox are prancin’ me over – right through de middle o’ Mayfields!”

In addition to the inappropriate text (for young children), punctuation is incorrect or missing, and spelling changes take Calico in and out of his accent (eg: “the,” “de,” and “dee” / “that is” and “dats”). Eclipses are incorrect throughout (“hold’n…” instead of “hold’n . . . “), and many of the words are made-up. I love imagination and encouraging kids to use theirs, but in children’s books—with a few exceptions (Dr. Seuss)—words need to be actual words with correct spelling.

Can’t Catch Calico (nice alliteration), aims to improve the self-esteem and confidence of children with disabilities. This is an admirable goal. There are not enough good stories with a disabled protagonist. But disabled kids need stories they can identify with and understand. Children will struggle to understand the strong dialect, which will interfere in any enjoyment kids might find in this off-kilter story. And, despite the author’s good intentions, Calico’s actions (stealing a chicken) causes his disability (a severed paw), which could be viewed as a punishment.

And what about the stolen chick? Calico bites off its wings so it cannot fly away. (“. . . chickenhead try to fly fly away but she don’t know I chewy chew chew off her wingers.”) How can I have sympathy for a “disabled” Calico when he causes the stolen chick’s “disability”  And really, the chick would not know its wings are gone?! 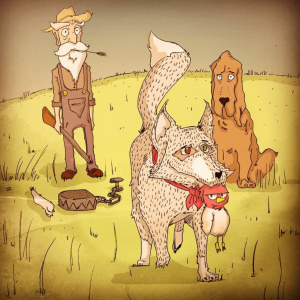 The illustrations are good. There are loads of detail to enjoy. I thought it funny that Calico starts his story in the chicken coop, with chickens Calico describes as “succulent,” yet he grabs a small chicken—angry bird small—which easily sits atop his head with room to spare. My only concern is the spread where the farmer aims his gun at Calico. The end of the gun is large to show perspective, but it looks like the gun is aimed at readers.

I wish I had better things to say about Can’t Catch Calico, but when basic elements like a credit page and an ISBN are missing; the ending is sudden and unsatisfying; and the text is difficult to read and understand I think the problems speak more to a lack of craft than a lack of story. The story is in the author’s head—and it is probably an enjoyable story—it just needs to find its way onto paper, written in a style appropriate for children. I sincerely hope Can’t Catch Calico finds its way.

.
Full Disclosure: Can’t Catch Calico by Elliot Carlson & Kevin McHugh, and received from Elliott Carlson, is in exchange NOT for a positive review, but for an HONEST review. The opinions expressed are my own and no one else’s. I am disclosing this in accordance with the Federal Trade Commission’s 16 CFR, Part 255: “Guides Concerning the Use of Endorsements and Testimonials in Advertising.”