“When Caroline’s classmate Chuck brings a woodchuck to show-and-tell, Woodchuck is so funny, their teacher says he can come to school every day! Woodchuck is friendly to everyone, but he’s especially sweet to Caroline. He gives her Chuck’s hat when her ears get cold and Chuck’s cupcake when she drops hers. But when Caroline forgets her lines during the class play, is it Chuck or Woodchuck who is there to help her out?” [inside jacket]

The Story
First-grader Caroline, narrates Chuck and Woodchuck. On show-and-tell day, she brings her grandfather’s ukulele from Hawaii and tells her classmates everything she knows about it, but can’t play a tune. Chuck brings a woodchuck and says,

That’s it. Then Woodchuck puts on an impromptu show with all the student’s show-and-tell objects. Impressed, the teacher actually tells Woodchuck he should come to school every day, so he does. At school, Woodchuck is really nice to everyone, especially Caroline.

When Caroline’s ears become cold, Woodchuck gives her a hat. It might be Chuck’s hat, but when Caroline tries to give Chuck his hat back, Chuck turns red and shakes his head no. When Caroline accidentally drops her cupcake, Woodchuck brings her another. Caroline thinks Woodchuck gave her Chuck’s cupcake. Trying to give it back, Chuck stumbles his words, while refusing the treat. With Chuck’s things, Woodchuck continues to help Caroline, and Chuck continues to refuse her returns. Then one day while on stage, Caroline forgets her lines. From behind the current, someone whispers to her and she repeats her lines like a champ. But who fed Caroline her lines, Woodchuck or Chuck? Will Chuck regain his ability to coherently speak?

Review
Chuck and Woodchuck is a sweet story of friendship . Chuck likes Caroline, but like many kids his age, Chuck is embarrassed, a little afraid, and totally unsure of himself. Step in Woodchuck. Woodchuck understands how his friend Chuck feels and tries to help. Woodchuck comes to Caroline’s rescue, using Chuck’s things so she will need to return them to Chuck. But Chuck is still too unsure and embarrassed to accept his things back, or to even speak. Yet, looking closely at the illustrations, Chuck seems to voluntarily give Woodchuck his hat, cupcake, and painting. With each item, Chuck gains a little confidence.

Cece Bell knows young children, and young crushes/coed friendship. Her characters could be any elementary-aged child. Woodchuck acts like a guardian angel, knowing how to get these two youngster together as friends. He overflows with confidence, just the trait Chuck needed. But then, is Bell messing with us? Chuck is more in charge than it appears. I swear he gave Woodchuck his hat, and maybe his cupcake too. 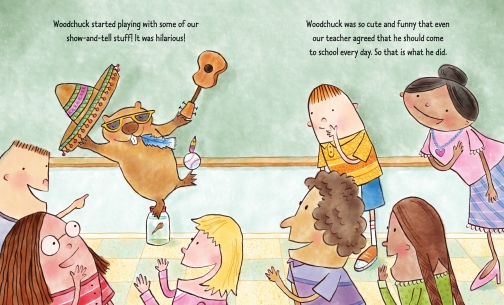 Bell’s ink and digitally colored illustrations are adorable. The kids look more like cartoons than today’s kids do, but they work wonderfully with the theme. I would have said the topic of crushes and puppy-love is too old for first-graders, but then I saw my own first-grade brother act goofy over his first crush. Woodchuck is the most expressive and normal looking of the three main characters. He make the prefect wing-boy for Chuck.

Chuck and Woodchuck tackles the sticky situation of puppy-love and coed friendships at an age when most kids prefer their own kind. Bell handles the subject with humor and heart. Her characters are fun, with Woodchuck the obvious favorite, for me and I suspect for children, too. Woodchuck is the perfect go-between for Chuck and Caroline. After reading Chuck and Woodchuck. every child will want their own woodchuck friend.

CHUCK AND WOODCHUCK. Illustrations © 2016 by Cece Bell. Used by permission of Candlewick Press.

Edited Out of Review
My first-grade brother developed a serious crush, and one rainy day, he choose to show his interest. Sitting in my parent’s car, waiting for him to show up and get in, he walked by, completely unaware of everything but this girl. My dad waited for my “in-love” brother to walk his crush to her ride, then he called out—euphemism for yelled—for his red-faced son to get into our car. To this day, my brother denies the entire incident. But that day in the car, with me teasing and laughing, his face remained beet red, and he couldn’t say much, his tongue tied in knots, except to say, “Shut up!” and “Did not!”

Full Disclosure: Chuck and Woodchuck by Cece Bell, and received from Candlewick Press, is in exchange NOT for a positive review, but for an HONEST review. The opinions expressed are my own and no one else’s. I am disclosing this in accordance with the Federal Trade Commission’s 16 CFR, Part 255: “Guides Concerning the Use of Endorsements and Testimonials in Advertising.”

I can’t help but wonder,

How much wood
Would a woodchuck chuck?
If a woodchuck
Would chuck
Wood?